Pound Cake: One Pound Each of Butter, Sugar, Flour and Eggs 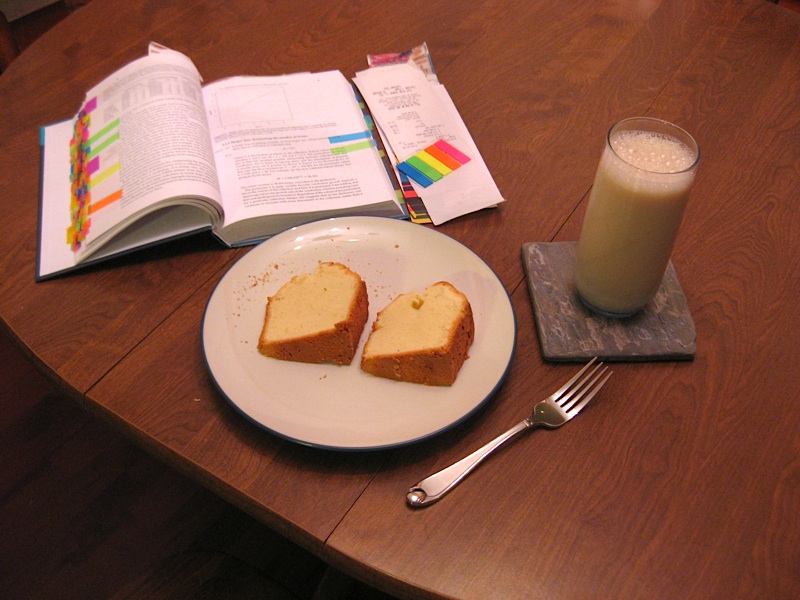 I enjoy a couple of slices of pound cake and milk as a late night dessert, but have difficulty finding pound cake that meets my standards. Forget the “loaf cakes” made by the big commercial bakeries: they’re not bad, but they’re not what I’m talking about. 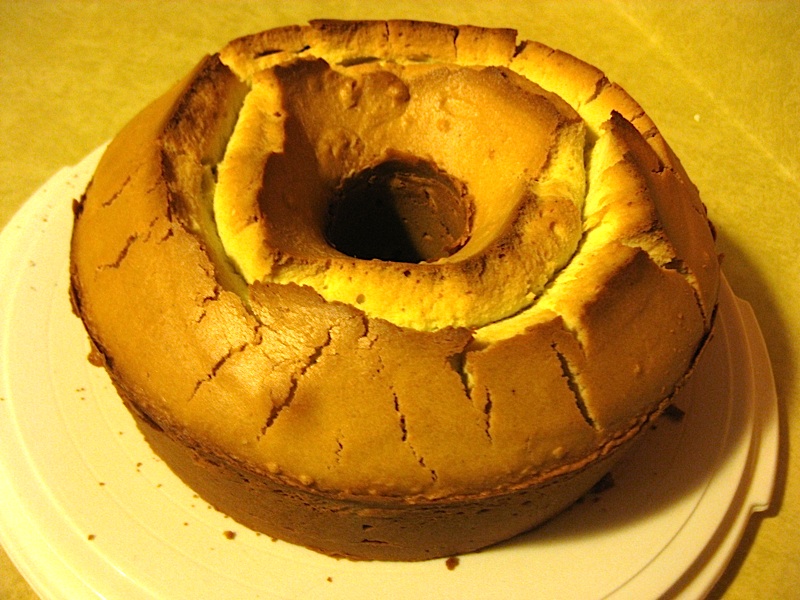 I’m talking about ring pound cakes. My neighbors made a dense, dry pound cake around Christmastime that was very good, but my favorites growing up were cakes you could get from Ingles: ring-shaped, light-textured, with a fluffy yellow center wrapped in a dark brown crust.

Usually there’s only one store in any given region that makes these, the others sticking to loaf cakes. As I moved from Greenville, South Carolina, I found Kroger in Atlanta and later Safeway in San Jose had cakes that were similar, with slight variations in density and crust.

But there’s something wrong in our modern commercial paradise: in the pursuit of the dollar or fashion businessmen tweak their good products until they become crappy and then discontinue them. I’m sure that’s happened to all of you; and sure enough it happened to my pound cake.

First, Safeway started selling them only as half rings. Then they cut back on quantity. Then they replaced them entirely with “vanilla loafs” pre-cut entirely too thin. Whole Foods had decent-flavored loaf cakes, but they too have started pre-slicing them and cutting back on quantity.

I don’t know what people have against pound cakes, but I can’t find them locally baked, not even at bakeries – only icing-covered disasters, pudding cakes, and other variants, or alternatively Entenman’s not-bad-but-not-good-enough butter loaves.

So, I am working on a pound cake recipe.

I made my first pound cake years ago, back in Atlanta. I was using the approximate “one pound” recipe: a pound of sugar, eggs, butter and flour. I didn’t have a motorized mixer, and the hand mixing and stirring didn’t cut it. It’s fair to say this was a total FAIL. The flavor and crust were good, but the texture was dense as a brick and it was too hard to eat.

More recently, I tried again. I had planned to try this with sugar first, then introduce Splenda on the next cake, but dumb me forgot to buy sugar thinking we had some, which I discovered halfway through prepping the recipe. I adapted the recipe primarily from “Butter Sugar Flour Eggs” with a little help from the 1997 “Joy of Cooking”:

Preparation was much easier with a $25 handheld motorized mixer from Fry’s, which cost less than the ingredients of the cake itself (to be fair, I think I bought other staples the night I bought the pound cake ingredients). The “trick” recommended by “Butter Sugar Flour Eggs” was to beat the egg yolks and egg whites separately; this worked out so-so in the egg whites step. In “Just Here For More Food” Alton Brown recommends a different method, which I will try next time. 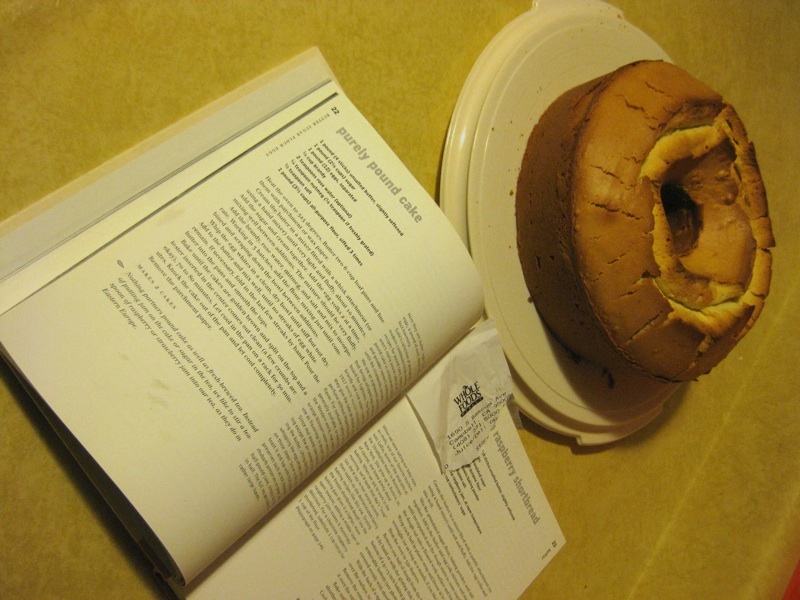 That’s right, all of the shots of pound cake shown in this article were from my first try of this recipe. It was a beautiful looking cake. The texture of this cake was slightly dense, but smooth and serviceable. The crust was very slightly dry but serviceable. The flavor I have to say was poor – it was in the right ballpark, one might even say it tasted right, but it had a chemical aftertaste. And I’m sad to say I don’t think it was the Splenda … I may have simply added too much vanilla extract. 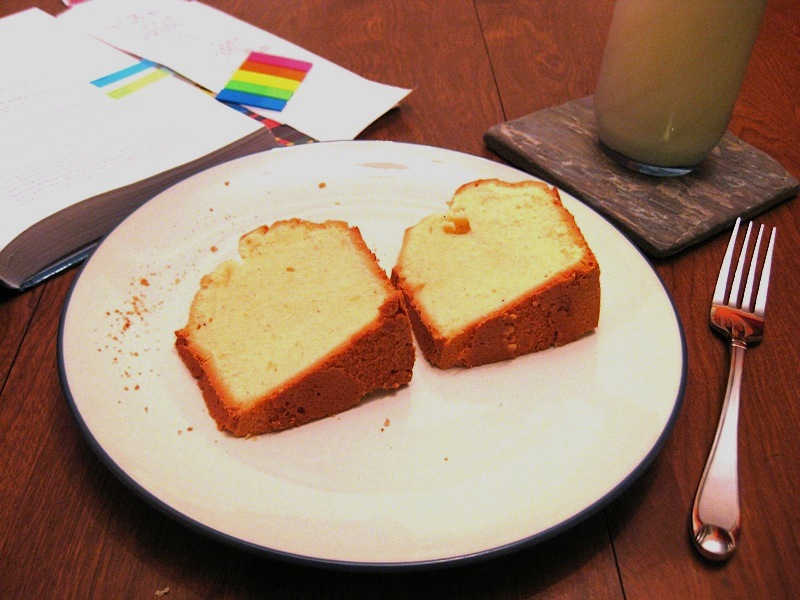 I’ve been consuming this cake for a while for my late night reading sessions, but I finally broke down and got the Whole Foods cake for comparison, having one slice of each. Ah, drat – the Whole Foods cake was much better, both in texture and in flavor, though it didn’t rise to the level of the long lost Ingles, Kroger or Safeway ring cake. 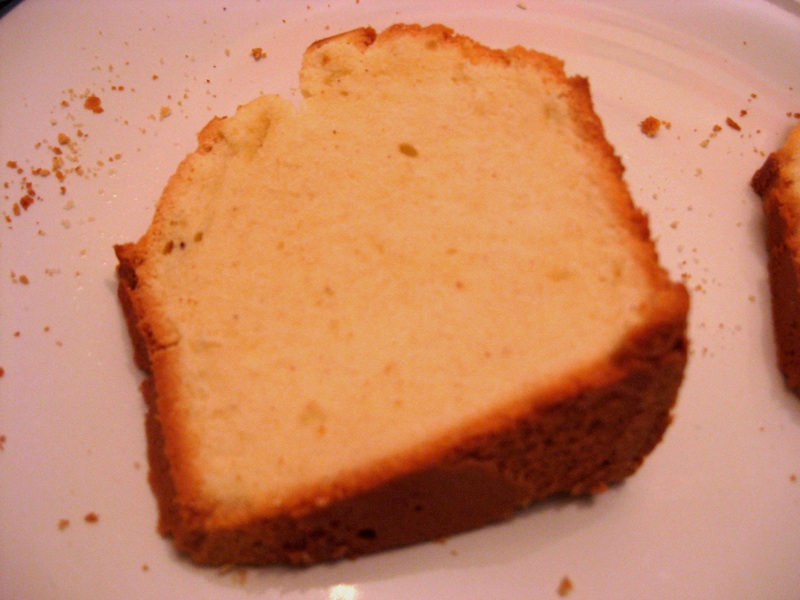