Tricking Yourself Into Doing The Right Thing 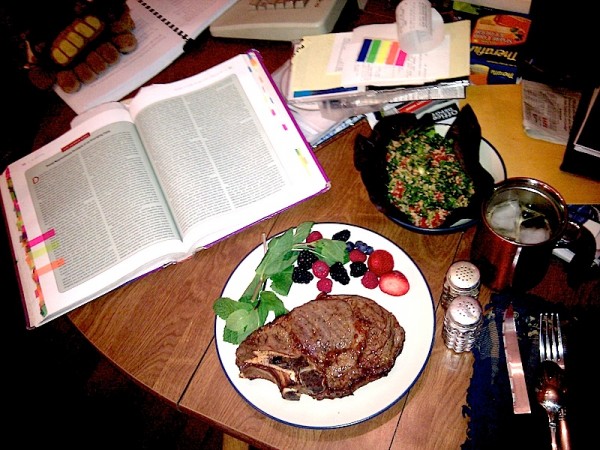 Sometimes it’s hard to do the right thing. For example, I enjoy eating dinner out. There’s nothing wrong with that; but it’s always easier to eat out than it is to fix dinner, as I can have high-quality healthy food made for me while I read or write or draw, whereas cooking at home involves shopping, cooking, and cleaning that I’m fortunate enough to be able to pay other people to do (and that through the absurd good luck that the rather esoteric work I was most interested in doing in grad school turned out to be relatively lucrative in real life).

But that’s not fair to my wife, or cats, nor does it help me catch up on my pile of DVDs or my library cleaning or any of a thousand other projects that can’t be done out at dinner. Sometimes I deliberately go out to dinner because I need to read or write or draw rather than do laundry, but I shouldn’t do that all the time – even though I can. But, if I keep making local decisions each time I go out to eat, I’ll keep doing the same thing – going out to eat – until the laundry or bills or book piles reach epic proportions.

This may not be a problem for people who are “deciders”, but I’m definitely a “get-stuck-in-a-rutter”. So how can I overcome this, if I’m living with the inertia of my own decision making system? One way is to find some other reason to come home – for example, cooking dinner with my wife (normally not convenient as she eats early, while I’d normally be at work, and even if I did try to get home her dinner time traffic puts me an hour and a half from home; but we’ve set a time to do that from time to time) but she’s out of town for business in New York, so I don’t have her to help me.

So the way I’ve been experimenting with recently is treating myself. Over the weekend I made a large bowl of tabbouleh, one of my favorite foods, and pound cake, one of my favorite desserts. The next evening I grabbed a small plate of sushi from Whole Foods and made another dent into the tabbouleh. I had a commitment the next night, but the following night I stopped to get gas and found that a Whole Foods had opened near my house, and on the spur of the moment I decided to go in, get a ribeye steak, and cook myself another dinner, eating even more of the tabbouleh.

The tabbouleh itself is healthy, and maybe the sushi is too; the steak, not so much. Normally I wouldn’t get another steak as I’d had a few recently, both homecooked and out at restaurants; but I wanted to overcome my decision making inertia. It would have been so easy to note the presence of the Whole Foods for later and go eat out; instead, I said explicitly to myself: you can have a steak if you eat in. And so I walked in to Whole Foods, walked out a couple minutes later with a very nice steak, and went home, quickly cooked a very nice dinner, and got some work done.

Normally I prefer to eat about one steak a month (or less), sticking to mostly fish as my protein source, but I’ll let my red meat quota creep up a bit if it helps me establish the habit of cooking more meals at home. Once that habit’s more established, I can work on making it healthier again. Already I know ways to do it: switch to buffalo, for example, which I prefer over beef steak anyway (and I’m not just saying that as a health food nut; after you’ve eaten buffalo long enough to appreciate the flavor you don’t want to go back).