A Man After My Own Heart 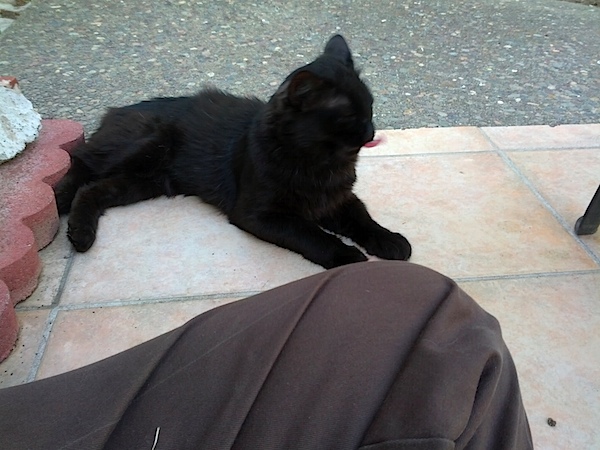 I don’t know what it is about people born about the same time as me, like John Scalzi and Warren Ellis and Richard Evans, but ever time one of them creates a groundbreaking game, gets nominated for the Hugo, wins an award or lands on the moon, they always make me feel like I’ve been sitting on my ass.

Well, John Scalzi has beaten me to the punch again, this time by eerily mirroring events from my own life and blogging about them while I’m still digesting the events. He recently found a small stray cat, and blogged that has he decided he’s going to trap it, get it fixed and possibly tame it, because he’d “rather be a sap than have a dead kitten on [his] conscience.”

Boy, do I know this feeling. I also have “cat lover AKA sucker” written on my forehead, and I and my wife have been going through a similar arc. We spent the last three months socializing a little spray monster we’ve taken to calling Loki, and yesterday my wife took him to the vet to get him his shots and fixed. My wife thought it worthwhile to share some of what we’ve learned that made us choose to trap, neuter and release him, even though it might scare him off. 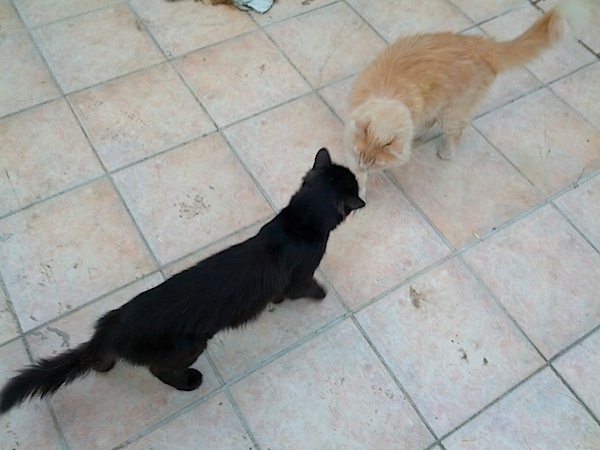 We strongly suspect Loki is the brother or cousin of Gabby, the gold cat above that we adopted about two and a half years ago. While their coloration is starkly different, both are highly vocal longhaired cats with similar tails that seem to know each other. Loki’s tail has thinned alarmingly in the above photo, but they looked even more similar a few months ago.

Loki isn’t a feral cat: he’s a stray—that is, an abandoned cat. Feral means an unsocialized wild cat which wasn’t raised with human contact and won’t approach people willingly. Loki? After some initial skittishness, probably caused by either abuse (he’s afraid of feet) or our initial attempts to chase him off (after another stray cat invaded our home and attacked my wife), Loki’s approach distance rapidly dropped to zero, and he can be petted, picked up and will even lie in your lap. More tellingly, he knows how to claw and bite without ever drawing blood—a sign of early exposure to humans. Loki was someone’s pet, once.

Now he is again. We don’t know if he can ever become an indoor cat—he was a little spray monster, and when we realized he was coming in through our cat door and making our other cats spray, we had to eliminate the door. But clearly he’d come to rely on our home for a food source, and even when he was skittish, he meowed piteously, trying to beg even as he ran.

So, back to John Scalzi’s plan: he’s dead on the money. Even if you don’t want a stray cat in your yard, it does you no good to get rid of it. Not only is it inhumane, all you’re doing is opening a space in the local cat territory map for some other, possibly more annoying cat to come in and take it. The right thing to do is TNR: trap, neuter, return. This preserves the local territory, so no more cats move in, but stops the cats from breeding out of control and taking over the local wildlife.

We just spent several hundred dollars on examinations and shots for our three cats plus examinations, shots and neutering for Loki, but if you’re not planning on keeping the cat, there are probably local animal shelters who will do the neutering for a much more reasonable fee. And unless the cat is a sweetie, there are good reasons not to keep him. 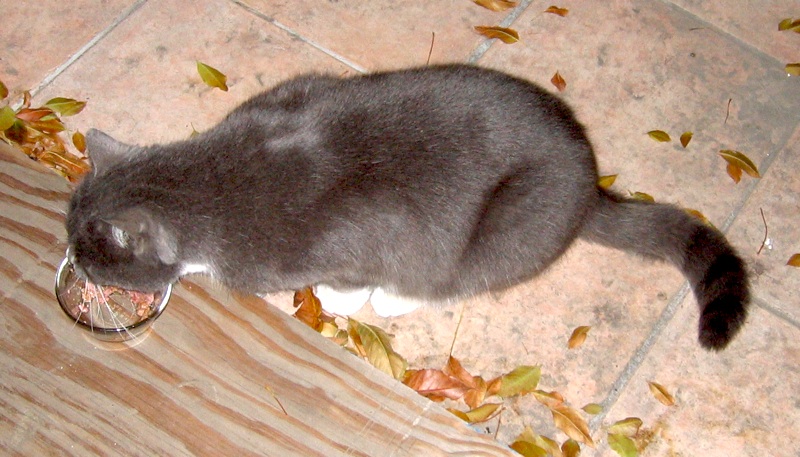 If a cat you’re trying to tame becomes approachable, great; but don’t try to tame one that’s obviously feral and wants nothing to do with people. The cat that attacked my wife, Graycat (pictured above) was so close to feral that only I could handle him, and that was with gloves. I was making progress at it—I could pet him, even play with him with toys outside—but that emboldened him, and he came into our house, fought with our cats, and then tried to attack my wife. She had to fend him off with a broom, not hitting him but trying to push him away—and then he attacked the broom, before running off. Sadly, we can’t deal with cats that attack us, and had to have him put him down.

It’s better to make a judgment call, which John Scalzi is currently doing with his skittish kitten. I wish him the best of luck with that! As for us, we’re hoping Loki comes back. After the neutering, we released him, and he hasn’t yet returned. Sad to say, neutering can permanently change the personality of a cat for the worse; my wife has had two cats “ruined” by bad vet experiences.

Still, our vet is good, and Loki took to it better than our three other little monsters. Here’s hoping he returns, that he stops spraying once the hormones drain out of his system, and that he finds a good life here. But regardless, we’ve done our duty: we’ve made his life better, at least for a while, and cut back on the local cat proliferation, at least for a bit. 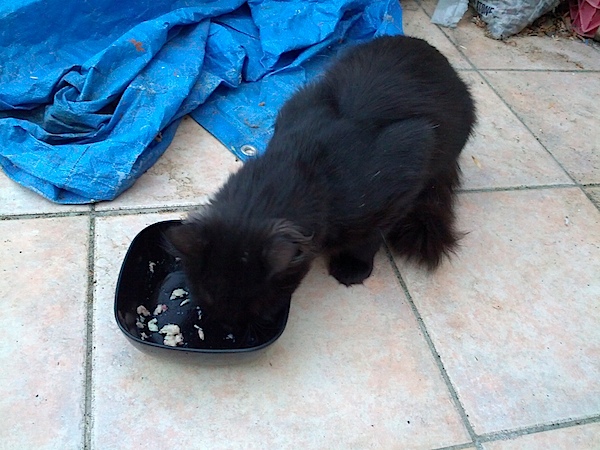 Here’s hoping he forgives us for that, and comes back for the love. And the can food.

And the laser tag.

UPDATE: He came back! 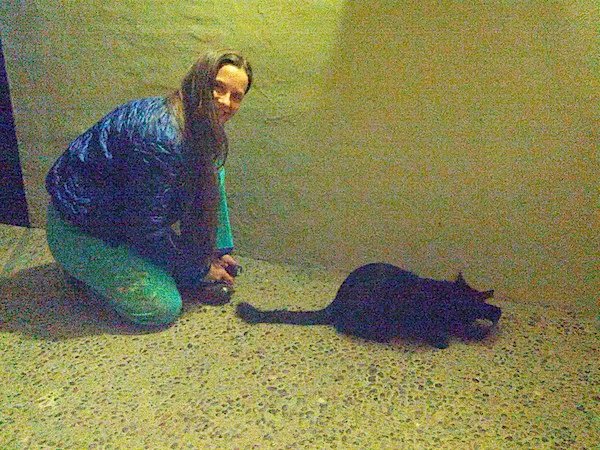 Twice. And he’s more affectionate than ever (though you can’t see that in these photo 🙂 … 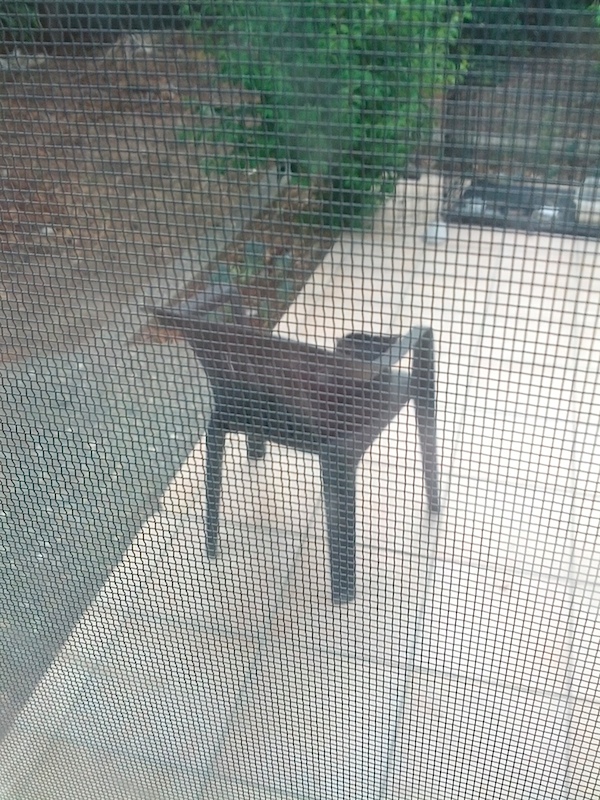 I think it’s safe to say he’s here to stay.