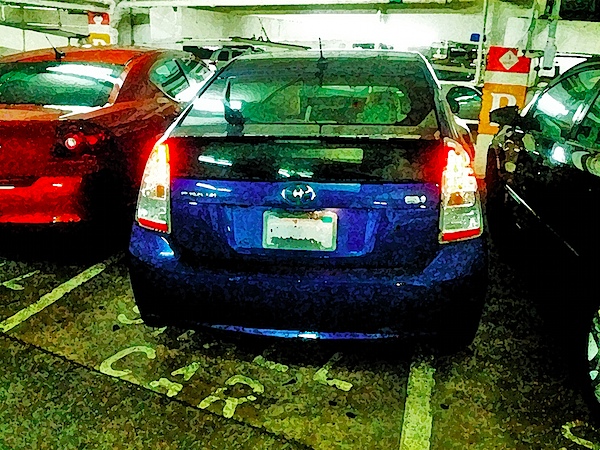 Recently I’ve become more interested in the scientific method, especially after spending a few weeks doing that Prometheus vs the Thing essay. After doing that, I realized that I believe myself to have superior parking skills … without any hard evidence to that effect.

I have plenty of anecdotal evidence, of course, for my supposed superior parking skills. My wife admires my parking skills. She can’t parallel park, whereas I can. Actually, she’s not the only one to have remarked upon it – other friends have too, as have strangers. Once, back when I drove a large SUV, I successfully parallel parked it in a tiny parking space with only inches of clearance front and back. Dissatisfied that I was more than four feet from the curb, I then, with a sequence of back and forths worthy of Austin Powers, slid the car sideways to within four inches of the curb. When I got out, the people watching in the nearby cafe applauded.

There’s other anecdotal evidence. I have spectacularly good “parking karma”. There are at least three different parking lots that my friends avoid that I have no trouble parking at. Part of this is a positive attitude: I believe there are spaces, so that helps me find them. Part of this is patient strategy: I know there’s flux in almost any parking lot, so I don’t get frustrated and drive off just before a space opens. And part of this is again skill: I know certain tricks for parking, like backing into a narrow space so my passenger door aligns with the other car’s passenger door, and I can leave more space for my driver door and the driver next to me. I enjoy finding the space that other people can’t find and don’t want to park in and taking that.

But this is all anecdotal. I’ve never done a scientific survey of parking skills and compared my abilities to the population mean. I’ve never even tried to define the term parking skills in a way that would make a concept of superior parking skills meaningful. It’s just an egotistical little belief I’ve picked up over the years. Just like the “parking karma,” an unscientific concept if there ever was one.

But I do have a good time parking, even today, in a lot so busy my friends often complain that it’s hard to park, I squeezed my car into a tight space today, a narrow, angled space a larger SUV drove past. I had to slide my car in and out of the space three times to align properly enough that I could get out of my car, because the car to the right was angled over the line, into my parking space.

But I parked. And when I got out, I checked. The car to my right could still open his door just fine.

Pictured: a different parking situation, in which some car far to the right had leaned out of his lane, and all the subsequent cars had to either keep parking at an odd angle, or drive on by. Other cars drove by; I parked just fine. Good parking karma continues.