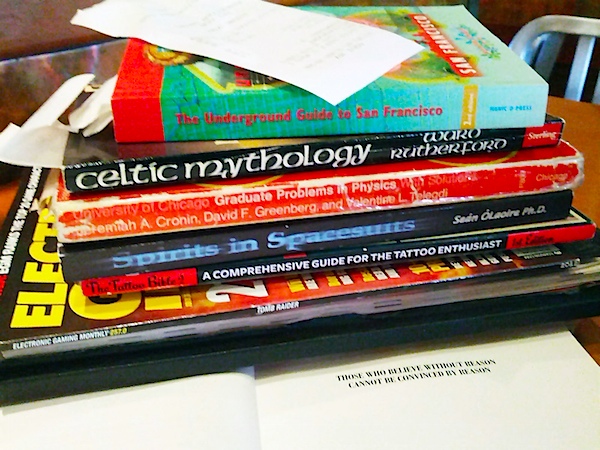 “Everyone’s favorite skeptical witch is back for her fourth foray in SPECTRAL IRON!”

Sheesh. I do find it hard to write marketing copy. I just had to stop, right there.

SO ANYWAY, National Novel Writing Month, 2012. My one, two, three, four, five, six … seventh, SEVENTH time writing 50,000 words of a new novel in the month of November. It’s quite the challenge, but it’s the second best thing I’ve ever done for my writing other than join the Write to the End group – more writing comes out of Nano than (almost) anything else.

Now it’s on to SPECTRAL IRON, book 4 in the Dakota Frost series. Pictured above are some of the books I’m reading to “feed my head” for the plot of the book, which involves magical tattoos, piercing, the fae, ghosts, three kinds of zombies, television, and the appropriate relationship of science to skepticism. From the site, here’s my blurb:

Because if you don’t know how to kill a ghost, how can you track down his murderer?

You need to write 1666 words a day to succeed at Nano, and so far, so good. Halfway through my day, and more than halfway through today’s progress. I should easily catch up to where I should be (missed ~300 words yesterday because me and my wife decided to take a long walk and then crash after that, rather than me getting my late night writing run in). 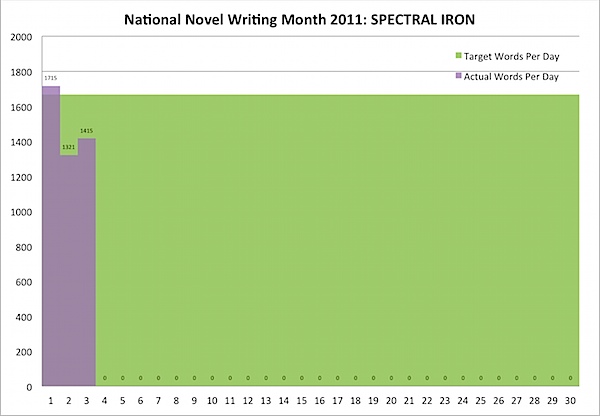 But most of the day is ahead of me. Alright, enough procrastinating. Back to work!