Blogging is like a job. One I’m bad at. 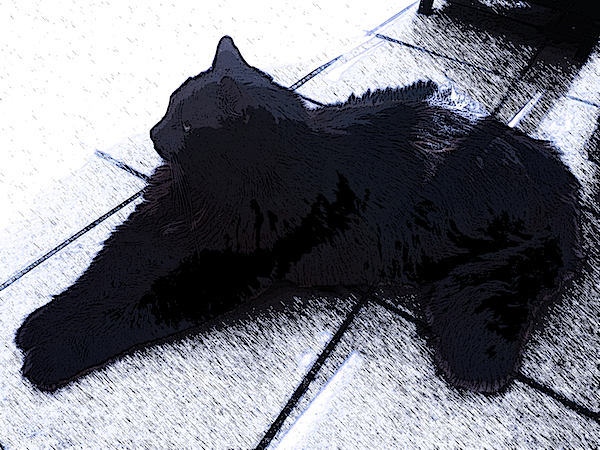 One of the things I’ve always felt about myself is that I’m slow. I have ideas for fiction, but before I ever develop them, I see them brought to completion by someone else. When I was a child, I had a wonderful story involving spacecraft made to look like sailing ships, only to turn on my television to find that it had been done in Doctor Who.

Next I read Drexler’s Engines of Creation shortly after it came out and planned a series of nanotech stories, before I’d ever read another science fiction author dealing with the theme. I was in college, still trying to finish my first novel, which I’d updated to include nanotechnology, when Michael Flynn published The Nanotech Chronicles.

Now in the blogoverse, things have gotten worse.

It’s bad enough that my evil twin Warren Ellis, a man only one year older than me, has propelled himself to the pinnacle of the writing profession using only whisky and a cane while still blogging more than anyone could believe. Warren Ellis has his own ideas and I don’t feel like we’re competing in the same headspace.

No, my it’s my nemesis John Scalzi, who has not only beaten me to the punch on the serialized novel The Human Division – I’m pretty sure my own designed-for-serialization novel THE CLOCKWORK TIME MACHINE predates it, but my novel is still in beta draft while his is like, you know, released to accolades and stuff – but also somehow seems to have plugged into my brain by beating my blog to the punch on his Hobbit at 48 Frames Per Second impressions and his attempts to tame a feral cat – I mean, come on! Everyone saw The Hobbit but even if Scalzi has a direct pipeline to my brain, how does one arrange to have a feral cat fortuitously run by one’s door so one can tame it right when someone else does? Is there a service for such things? Synchronicity Unlimited?

Now dark mental wizard Caitlin Kiernan has beaten me to the punch by blogging about the correct pronunciation of kudzu.

Alright, thanks, Caitlin, for breaking the ice on one of my pet peeves. For the record: if you are recording an audiobook and have a Southern character speaking or thinking, they will pronounce the Borg-like pest vine kudzu “CUD-zoo.” A character who lives in another part of the country can call it “kood-zoo” all they want, but in my 38 years in The South I never heard it pronounced that, nor, after nine months of research, have I been able to find anyone from The South who calls it anything other than “CUD-zoo,” nor have any of those people ever heard anyone from anywhere call it anything other than “CUD-zoo”. (And Wikipedia backs me – it claims the pronunciation is /ˈkʊdzuː/, with the first u pronounced as the u in full and the second pronounced as the oo in food).

It wasn’t so hard to say that, was it? Why didn’t I say that earlier, nine months ago, when I first heard it in an audiobook (I think in The Magnolia League, but it might have been Fallen)? I know I’ve been busy, but how hard was it? But, according to the timestamp on the image I downloaded of Loki at the start of this blogpost, I’ve been at this “little” blogpost for about an hour.

What I’m saying is, blogging is like a job. You find things, reflect on them, and post about them; it takes time to do it right. But I already work two jobs: I’ve got a slightly-more-than-full-time job at The Search Engine That Starts With A G, and I’m also a slightly-less-than-full-time writer. So this, my third job, has to come behind hanging out with my wife, friends and cats. I’m taking time out from editing an anthology to write this, and that’s taking out time from Dakota Frost #3 and THE CLOCKWORK TIME MACHINE.

So: yes, I know. Lots to say, lots to do. Gun control. The Hobbit. Meteors falling from the sky and a drill making its way to a creepy buried lake in Antarctica. I’m working on it, I’m working on it – but two editors have claim on my writing first, and the provider of the paycheck that pays for this laptop has first claim on my time before that.

So if the freshness date on these blogposts is not always the greatest, well, sorry, but I’m typing as fast as I can.

Pictured: Loki, our non-feral outdoor cat, who has grown very fat and but not very sassy given lots of love and can food.

Published in Fiction, Steampunk, The Cats, Uncategorized and Urban Fantasy