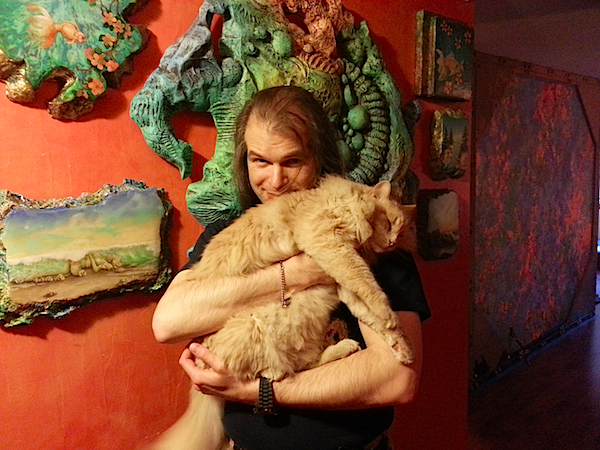 Readers of this blog know I’m a cat lover, and the favorite of our cats is Gabby, a loquacious gold cat that followed us home as a kitten and now is a fifteen pound fur monster.

One of his quirks is to follow you into the bathroom when you take a shower, and then to meow plaintively during the whole time you’re running the water. If you peek out of the shower at him, Gabby has what can only be described as an expression of concern on his furry little face, meowing harder. When you get out of the shower, he stands up and reaches for you with his paws.

This behavior was mysterious until I had a brain flash the other day: we got Gabby when he followed us home … after two weeks of heavy rain. Clearly he’d been cared for, as he knew people very well — but we could never find his original owners.

Then it all clicked: he lost his family in the rain … and doesn’t like the sound of the shower because he’s afraid he’ll lose us too.

Don’t worry, Gabby. We have no plans to leave you.

Pictured: Gabby and me, standing in front of my wife’s art.