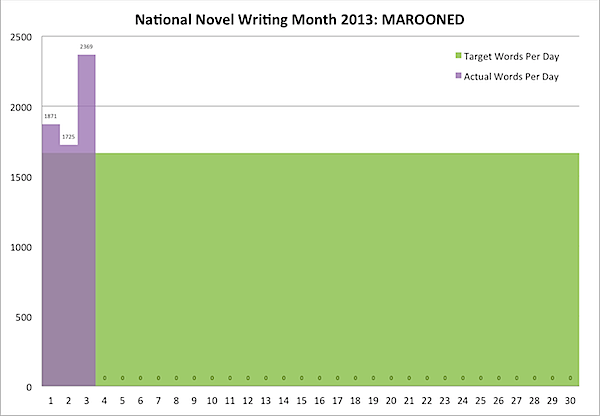 So far, so good. Not really a good excerpt to be had here, first drafty stuff … ok, how’s this:

Serendipity looked up from her cauldron. The first step in getting the robots back up to speed had been getting Tianyu back up to speed, and to do that she needed components. With her fabricator in Toren’s camp … her next best bet was her nanoseed.

She’d requisitioned a large cooking kettle from Leonid and filled it with biosludge, then heated it to the proper activation temperature. With a droplet from her nanoseed and the right dopants, Serendipity should be able to generate enough nanoplasm to make anything.

“How do you figure,” Serendipity said, stirring the cauldron slowly.

“Bubble, bubble, toil and trouble,” Dijo said, raising a cylinder. “You’re making potions. You’ve got a familiar. You have what seem, to us technological primitives at least, like magic powers. All you need is a witches’ hat and a magic broom—”

“My mom wears the hats,” Serendipity said, “but I do have a farstaff.”

“It can fly?” Dijo said, shocked. “Not just teleport you, but actually fly?”

“It can indeed,” Serendipity said, taking the cylinder. “Molybdenum. Excellent.”

“Ammonium tetrathiomolybdate in solution,” Dijo said. “That’s from the hyperdrive, by the way, so don’t go using it medicinally unless you separate it first.”

“Do you really have a ship’s worth of Lore rattling around in your head?”

Now off to see Gravity … which will probably be good inspiration for MAROONED!