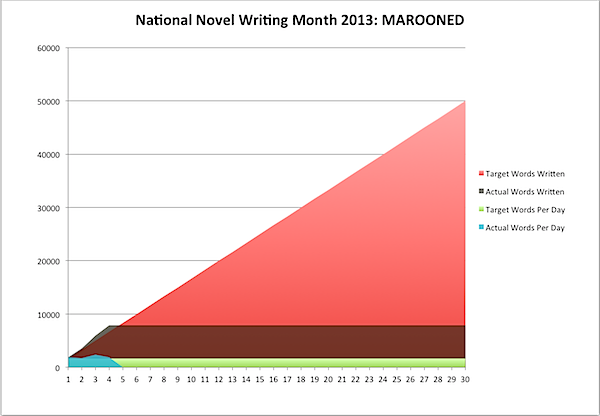 MAROONED is still progressing. Taking a break now, but I’m keeping above the curve so far.

“Seren, this is serious,” she said. “We have a spacecraft to rebuild. If we can get this housing running again with a standard cabling software, we have to do it, whether his software is inclined or not. We can’t afford to romanticize your little pet—”

“He is not a pet,” Serendipity said. “He may be my ‘familiar,’ but he’s a full person, with a full person’s rights and responsibilities. This housing isn’t just a piece of equipment we can do what we want with. It’s his body, and we need his permission—”

“If Leonid needed some biomass to keep the oxygen farm running, would you be happy if he just threw you into the cycler?” Serendipity asked. “No? Wouldn’t that go double if you were in a coma, expected to recover, and they just decided to cycle you anyway, just because?”

Dijo stared at her with those odd contact lenses.

Again she felt reluctant, but Serendipity realized that if she really wanted to be part of this crew, she had to recognize Dijo as her superior. Slowly Serendipity stepped back, reached in her satchel, and carefully brought out Tianyu’s still form.

Filled with mercury batteries, built on a thact frame, the minifox felt unusually heavy in her hands—dead weight, she thought, and cursed herself—and oddly small and sad. Without the millions of tiny motors fluffing his fur, he looked flat and drab, doubly so because of the soot.

Serendipity laid Tianyu down on the worktable between her and Dijo. “This is my best friend,” Serendipity said. “I mean that. More than my cohort, more than my PC’s, in some ways, more than even my parents. He’s always been there for me, when by right he could have chosen to go elsewhere. You will not treat him like a collection of parts.”

Serendipity reached down, putting her fingers under Dijo’s chin and lifting her back up. It was an easy move, an aikido move despite the initiation of force, and despite resistance she easily straightened Dijo back to standing. Dijo stepped back, a bit shocked.

“We have a ship to fix, I owe you help fixing it, and I’ll serve under you if that’s what you think I should do,” Serendipity said. “But this world is mine. It’s my responsibility to protect all the people within half a light year, even the ones you can’t easily see as people yet.”

Dijo raised her hands, licked her lips. She was scared.

Onward into the deep!