MAROONED but not under water 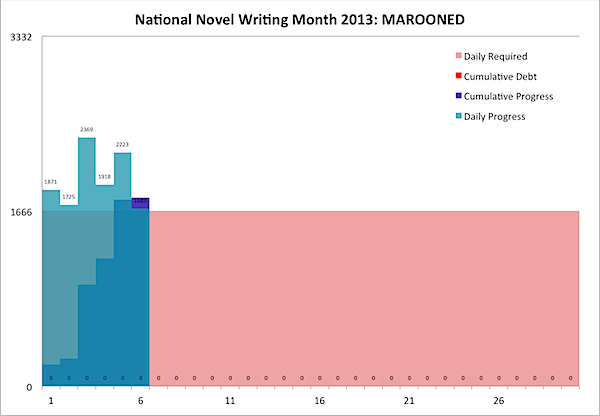 So yet another day of Nano has rolled by and I’m still managing to cough out 1666+ words a day (the lighter blue lines above the red water line). I’ve added 11,795 words to the manuscript, which by my counter is just shy of 25% of Nano – roughly 3.6% ahead of where I need to be, or almost one full day (the surplus is the second, darker blue line in this visualization).

Since my seed was the largest I ever started with – 32,793 words, including the complete novella “Stranded” plus all the story notes I put together over the months since I wrote that story – completing Nano this year will leave me with 82,793 words, which I’m guessing will be very close to a full manuscript. Most of my novels clock in around 150,000 words, but this one feels like 90K.

“How do I know,” Toren said, “you won’t send soldiers to evict us once your people come back here, whenever that is—”

“Roughly fifteen months,” Serendipity said, looking at him sidelong. “And no-one can evict you. I am Governor of Halfway, and I’ve offered the crew of Independence oasis, and the ship a permanent berth. Leonid accepted. Halfway is Independence’s home port now.”

Toren rocked on his heels a little. “There is no port, you foolish—”

“That is a port,” Serendipity said, jerking her head at the spaceport. “It’s not a castle, it’s not a mansion, it’s not a secret lab—though I suppose to Norylan’s parents it was all of those things, to me it is the kernel of the civilization I hope to build here—”

“You build,” Toren said. “You mean to build a civilization—”

“It’s why I came here,” Serendipity said. “This port lay fallow for ten thousand years because a war cut off the spacelanes, and I was the first person to recognize that it might be restored, now that traffic has begun moving out here again—”

“Including from the Frontier,” Toren said, staring off at the port, “which didn’t even exist ten thousand years ago.”

“I had to move fast,” Serendipity said. “After all, you got here just when I did.”

Toren stared down at her. “You’re crazy. Crazy, you know that? When the Allies get here, they’re going to ship you off to a nutter’s pod. And I still don’t know whether me and my crew are going to have to flee when they come. And you know which of us is right?”

Serendipity’s eyes tightened. “No,” she admitted.

Toren’s eyes gleamed at her. “Me neither.”

Uh oh! Serendipity once again facing off with Toren? A dangerous development. What’s he figured out she hasn’t?

Onward into the deep!