For the 8th time, I have won National Novel Writing Month! This year, I knuckled down early, focusing on getting as much ahead as possible so I could coast early in the month. This really worked because my story soon started turning in unexpected directions as I mined the emotional relationships of the characters, rather than the overarching plot. And I think it worked well! Look at that: 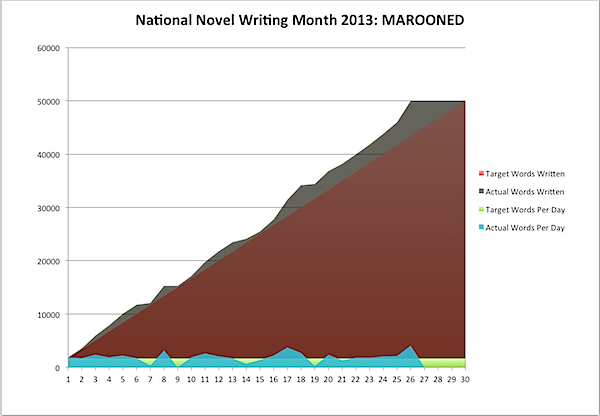 I was successfully able to stay ahead of the game essentially for the whole month, enabling me to finish several days early. I hope to keep writing, to core dump the ideas I’ve had about the story, as while it is wonderful to find unexpected elements of the story (including a shout-out to one of my oldest childhood toys and the origin of the Dresanian universe) there’s more to write. 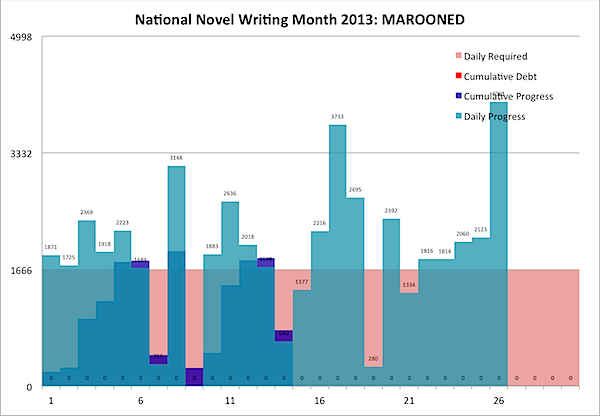 But now I can take a more leisurely pace, read the giant stack of books I’ve accumulated to help me flesh out the plot ideas, and turn it all into something more interesting. For example, here’s an interesting combination of plot and emotional interaction, none of which I ever really expected:

The mammoth city-sized collection of globules drifted by. Some were firm and puffy like gasbags; some soft like pillows, some trailing and drifting like punctured balloons. So many tentacles fell down from it that it looked like it was raining beneath. Slowly, the globules crested a ridge and began to sink.

Leonid’s mouth parted, but he maintained his firm, watchful, captain on deck boots-wide stance on the window, even though his legs had begun to cramp. Then the city slowly settled to the earth in a cloud of dust.

“It is a city,” Serendipity said. “Or something very much like one.”

“I’m not willing to give it that yet,” Leonid said, as the globules settled and burst, gas streaming up from some, gasbags lifting tentacles up from others, remarkably like towers. “But my mind is open to the possibility. Spores, your grandmother said.”

“Yes,” Serendipity said. “Perhaps the gasbags make the cities, and the spores that they release inhabit the cities. I don’t know—like she said, it appears most of the records of Halfway were sealed after the war. Damnit. And Greatgramma Clarice led me straight into this—”

“Sounds like a dick move,” Leonid said, “but you and your family are all geniuses. Let’s not give up on her just yet. Maybe she thought you were your grandmother’s granddaughter, that you were the right person to deal with Halfway.”

“One thing for certain,” Leonid said, smiling down at her, legs still firmly planted on the rail, cutting as heroic a pose as he could, “black sun or no, Halfway is a beautiful world—and we’re going to make the best of it.”

Then something slammed into the ship so hard it knocked him backwards into the soup.