SO yet again I’ve completed a challenge to finish 50,000 words in a month … this time the April Camp Nanowrimo challenge. My goal was to write 50,000 new words in the 4th Dakota Frost book, SPECTRAL IRON … and as of April 30th, I did it: 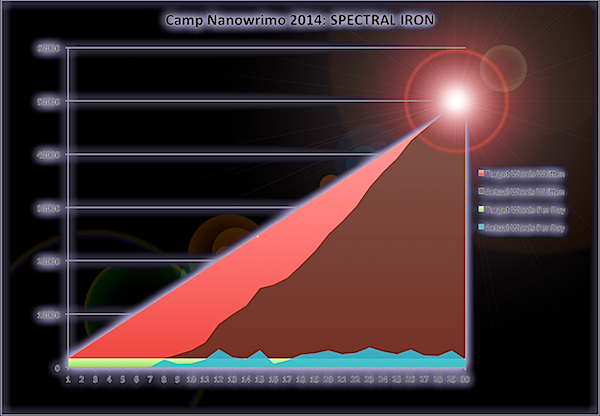 Normally I write a lot about how this happened, bla bla bla. But the big thing that happened with this month is that it has gotten me ahead of the game for a change. I’ve had breaks, of course, in the past year and a half, but no matter how easily I breathed, I always had two almost-finished novels hanging over me (LIQUID FIRE and CLOCKWORK), and chunks of several more half-finished novels waiting in the wings (HEX CODE, SPECTRAL IRON, and MAROONED).

Now both of those books are at the publisher, my editor and I aren’t going to talk until after Memorial Day … and I, for once, feel like I’m starting to get caught up.

If you see me wielding a stick, it’s to beat off new projects with. 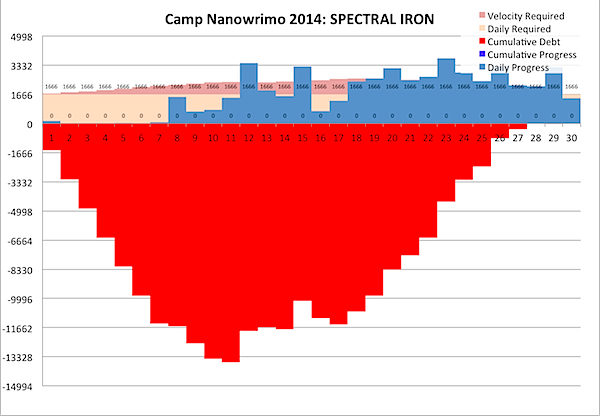 The last thing I learned is that I can basically write 50,000 words of rough draft material in approximately 20 days, and that’s with having serious work responsibilities and personal responsibilities I have to put first. It’s a push, but it isn’t an impossible push, and that means I can seriously start looking at other projects and start figuring out where to wield that hammer.

First up, the frontispiece for LIQUID FIRE. Then, my upcoming talks at Clockwork Alchemy. Oh, and the next version of Blitz Comic’s Survival Guide. Lots of projects … but all were on the plate before. Now I just no longer have a giant sword of Damocles hanging over them; I instead have Thor’s hammer, ready to strike.