Don’t Put Things off Too Long 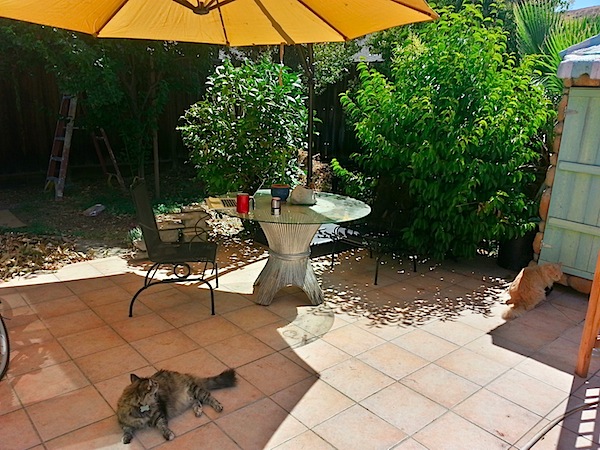 Recently I wanted to write a blogpost. A blogger I read put up an interesting article, and I wanted to respond. But I rapidly found that there were so many concepts that I take for granted that the article would be incomprehensible without them. I had four bad choices: go ahead and make the article incomprehensible, make it so long it’s unreadable, write many blogposts explaining the ideas, which would make the final post no longer timely, or don’t blog it at all.

I knew this lesson already because I had one friend whose father worked his whole life saving money, but then got too physically sick and mentally enfeebled to enjoy the bounty he’d prepared for his family. Then again, when I moved out of my condominium in Atlanta, another friend pointed out I’d made the classic rookie mistake: renovating the house on the move out to sell it … meaning the new owners got the benefit of the renovations, leaving me having lived there for years in a place I wasn’t happy with.

The right time to fix up your place is when you move into it: identify the problems that you have and fix them. If you’re going to spend a lot of money fixing up your place, you should enjoy it; don’t get suckered into spending a lot of money on renovations in the hope it will raise the price of the house. Unless it’s a big bathroom or kitchen remodel, it won’t.

There are a lot of reasons me and my wife didn’t fix up our place when we moved in, mostly having to do us expecting to move within a few years and that not happening because of the financial crash. We actually started the process of renovation, put up some crown molding and such, but then put it on hold … and the holding pattern continued for seven to eight years.

But, recently, we had the opportunity for me to move closer to work. We considered it, then decided not to. With the money we saved from not moving (down payment on new house, plus megabucks to ship all my junk) we considered renovating the bathroom. The cost for what we wanted was literally triple what we expected, so we decided to hold off on that too.

With the money saved for the move that we hadn’t spent, we realized we could easily fix many of the small woes in the house. I won’t go into all of them, but we’ve been systematically updating the house on a small scale – fixing up broken fixtures, replacing older equipment, planting plants, and so on. The most recent expenditure: a new umbrella for the back patio.

That seems like a small thing, but when we bought the house, it had a wooden trellis over the whole back patio, but it was destroyed before we moved in, in a freak rainstorm while the house was being tented for termites. A tree that shaded the patio had to come down because it was destroying the neighbor’s fence. So for most of the time we’ve lived there, the patio has never had adequate shade, and has effectively been unusable, leading me to spend many a day on the front porch.

The front porch is nice, but you should be able to use your patio. When we renovated it, we decided to stay cheap: a free table, cheap but very comfortable made-in-the-USA metal chairs and, rather than plunking a lot on a new trellis, we decided to get a simple fold-away patio umbrella. I put it up, winched it out … and found that the back porch completely changed.

You can see the result up there, but it’s hard to describe how it felt. The umbrella, while not seeming so large, actually covers the patio on its shorter length. The patio became inviting again. I had to work from home, so I dragged my laptop outside, sat under the umbrella, and coded while a sequence of cats hopped up into my lap, wanting attention. 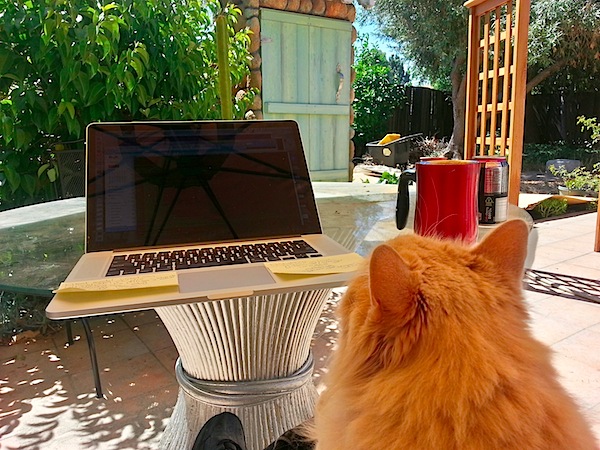 The cost of the whole project was under five hundred dollars, about a quarter of the cost of replacing the trellis.

We could have done this eight years ago.

Congratulations. We just lost eight years of enjoyment we could have had in our back yard because we were indecisive in the name of saving an amount of money which, while not trivial to most people, was in the larger scheme of mortgages and cars and computers and phones and even the trellis project itself, was a mere pittance.

So don’t put things off too long, is what I’m saying. You may find yourself having missed out on years of enjoyment, as we did with our back porch, or you may find yourself unable to take advantage of an opportunity, as in the case of my blogpost. Yes, be frugal, be busy, be a good use of your time, but for goodness sake, if you have an idea, execute on it.