Meanwhile, Back at GDC 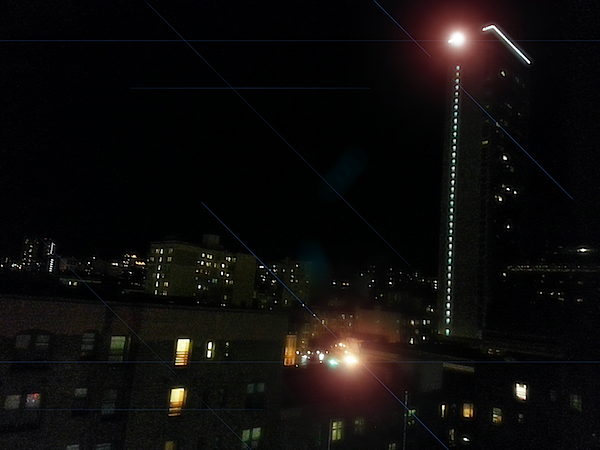 View from my hotel in San Francisco. It may seem strange to get a hotel for a conference in San Francisco when I live in the San Francisco Bay Area, but the truth is that I “live in the Bay Area” only by a generous border-case interpretation of “Bay Area” (we’re literally on the last page of the 500-page Bay Area map book that I bought when i came out here). The trip from my house to the Moscone Center in the morning is two to two and a half hours – you could drive from Greenville, SC to Atlanta, Georgia in that time, so by that logic I should have commuted from home to Georgia Tech. So. Not. Going. To. Happen.

So why am I heading to the Moscone Center this week? The Game Developer’s Conference, of course. At the request of my wife, I may not directly blog from wherever it is that I am, so I’ll be posting with a delay about this conference. So far, I’ve attended the AI Game Programmer’s Guild dinner Sunday night, which was a blast seeing old friends, meeting new ones, renewing friendships, and talking about the robot apocalypse and the future of artificial intelligence research. GDC is a blast even if you don’t directly program games, because game developers are constantly pushing the boundaries of the possible – so I try not to miss it. I’ve been coming for roughly 15 years now – and already have close to 15 pages of notes. Good stuff.

One thing does occur to me, though, about games and “Gamer Gate.” If you’re into games, you may or may not have heard of the Gamer Gate controversy; some people claim it’s about corruption in games journalism, while others openly state it’s motivated by the invasion of gaming by so-called “social justice warriors” who are trying to destroy traditional male-oriented games in favor of thinly disguised social commentary. Still others suspect that the entire controversy is a manufactured excuse for misogynists to abuse women in games – and there’s evidence that shows that at least some miscreants are doing just that.

But let’s go back to the first reason, ethics in games journalism. I can’t really speak to this from the inside, but in the circles in which I’ve been playing games for the past thirty-five years, no one cares about game reviews. Occasionally we use game magazines to find neat screenshots of new games, but, seriously – everything is word of mouth.

What about the second, the “invasion of social justice warriors?” I can speak about this: in the circles that I’ve traveled in the game industry in the past fifteen years, no one cares about this controversy. At GDC, women who speak about games are much more likely to be speaking about technical issues like constraint systems and procedural content generation than they are about social issues – and men are as likely as women to speak about women’s issues or the treatment of other minorities.

These issues are important issues – but they’re not big issues. Out of a hundred books in the conference bookstore, perhaps a dozen were on social issues, and only two of those dealt with women’s culture or alternative culture. But traditional games are going strong – and are getting bigger and better and brighter and more vibrant as time goes along.

People like the games they like, and developers build them. No-one is threatened by the appearance of a game that breaks traditional stereotypes. No-one imagines that popular games that appeal to men are going to go away. All we really care about is make it fun, make it believable, finish it in a reasonable time and something approximating a reasonable budget.

Look, I get it: change is scary. And not just emotionally; these issues run deep. At a crowd simulation talk today, a researcher showed that you can mathematically measure a person’s discomfort navigating in crowds – and showed a very realistic-looking behavior where a single character facing a phalanx of oncoming agents turned tail and ran away.

But this wasn’t an act of fear; it was an act of avoidance. The appearance of an onrushing wall of people made that straightforward algorithm, designed to prove to the agent that it wouldn’t run into trouble, choose a path that went the other way. An agent with more options to act might have chosen to lash out – to try to force a path.

But none of that was necessary. A slightly more sophisticated algorithm, based on study of actual human crowd behavior, showed that if an agent choose to boldly go forward into a space which slightly risked collisions, avoiding a bit harder if people got too close, worked just as well. It was easily able to wade through the phalanx – and the phalanx smoothly moved around it.

The point is that many humans don’t want to run into things that are different. If the oncoming change is big enough, the simplest path may involve turning tail and running away – and if you don’t want to run away, you might want to lash out. But it isn’t necessary. Step forward with confidence moving towards the things that you want, and people will make space for you.

But change won’t stop game developers from making games aimed at every demographic of fun. Chill out.

P.S. Yes, it is a bit ridiculous to refer to a crowd avoidance algorithm that can mathematically prove that it avoids collision as “simple”, and it’s debatable whether that system, ORCA, which is based on linear programming over a simplification of velocity obstacles, is really “simpler” than the TTC force method based on combining goal acceleration with avoidance forces derived from a discomfort energy gradient defined within a velocity obstacle. For the sake of this anecdote, ORCA shows slightly “simpler” behavior than TTC, because ORCA’s play-it-safe strategy causes it to avoid areas of velocity space that TTC will try, leading to slightly more “sophisticated” crowd behaviors emerging naturally in TTC based systems. Look up http://motion.cs.umn.edu/PowerLaw if you want more information – this is an anecdote tortured into an extended metaphor, not a tutorial.