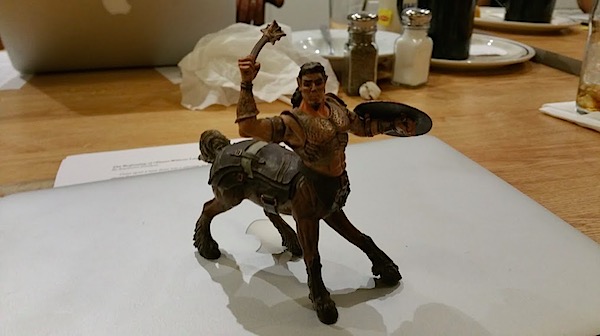 For those of us who are hermits, it’s sometimes good to get a reminder of the great things that can happen via social support. At the recent Write to the End meeting, I stepped up as facilitator when Keiko O’Leary was delayed on a plane flight – but when she showed up, after an offhanded comment by one of the members, we all decided to pretended that she was new to the group! We asked her to introduce herself, welcomed her warmly, and explained everything as we went, which she found hilarious – and comforting, since she didn’t have to do any work handing out prompts or monitoring the time. It was a great writing session for all, and couldn’t have happened without the happy synergy of all the different people working together.

I had a similar experience at lunch at work recently – I’m a loner, and normally go off on my own to read or write my books, but I do try to join the team a few times a week. At the lunch table, thinking of one of my problems, I said: “Wouldn’t it be neat if we could apply X technology to Y”? Suddenly, EVERYONE was chiming in: one TL scoped out the problem, another coworker had great suggestions, and after twenty minutes of discussion I offered to go write it up. But I didn’t have time before I had to interview a candidate, so when I came back I found a one-pager written by a coworker. I sat down to expand it, realized my coworker had a key insight, and ended up producing a half-dozen page design doc. I may have been the first person to utter “apply X to Y” but the final idea was very much a joint product of every person at the table – and could NOT have been done alone.

As an on-again, off-again follower of Ayn Rand, I guess this is exposes one of the many flaws of traditional Objectivist thinking: its black and white nature, particularly with regards to committees. Several of Ayn Rand’s books lambast the work produced by committees, and I indeed have seen horrors produced by them – but call a committee a “brainstorming session”, and you can literally produce things which no-one could have produced alone. Of course, a single person or small group must then refine and focus the ideas so they can be implemented, or everyone will go driving in different directions – but even that seeming aimless search can be a success if you’ve got a large technology space to explore and a diverse group of committed, dedicated engineers to explore it.

But the possibility of brainstorming is not really what I want to focus on: it’s the great things that come out of treating your fellow people right. Being nice to each other greases the wheel, sharing your ideas and being open to theirs improves intellectual debate, and treating one person as special on a special occasion can really lift their day – whether it’s a thank you card and gift to a former manager, a day off for the facilitator of a group, or just giving a friend who’s into centaurs a centaur statuette that you happened to pick up two of by accident. These little things don’t just brighten our day – they change it, making the world a better place, one small act of kindness at a time.