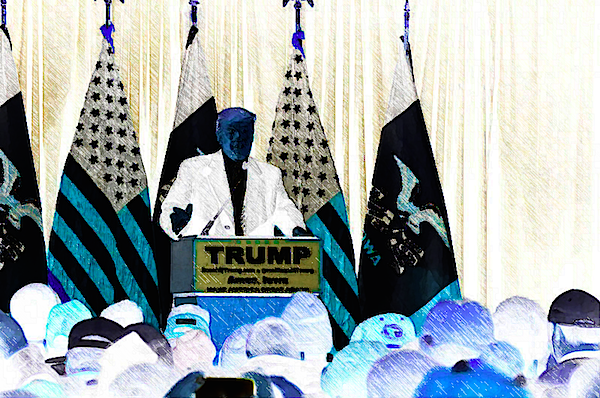 Poll watchers may have noticed that Donald Trump has apparently failed to come first in the Iowa Caucuses. I know at least two people – one of them being my military advisor, and the other being Trumpwatcher Scott Adams – have predicted that Trump would win the caucuses, then run the table.

I have a number of bad predictions about the race – namely, that he would bow out as he’s bowed out before, as a result of his genius brand management. He didn’t. But I did also predict that winning the nomination takes more than leading in the polls – it takes a good ground game, and that with half of Republican voters unwilling to vote for Trump, he had a hard road ahead of him.

Now, there are forty-nine states left, and plenty of time for Trump to turn it around. And a lot says he might – Adams would say because he’s a Master Persuader, some of my friends because they think he’s awesome, and my old high school history teacher would say populist demagogues are always popular.

But, if Trump wants to bow out when the going gets rough, as Trump did before the last two times he ran, he will have accomplished a genius act of brand management. You can’t buy publicity like he’s gotten through his antics, and he’s made the things he cares about the focus of the campaign. Kudos to his skill.

To go on the record, I think Trump’s a poor choice for President. He’s anti-American, frequently insulting immigrants (like my grandfather) and veterans (like my father) and everyone who opposes him (like half the people a real President would have to deal with in office). He’s a loose cannon, frequently tossing out crap ideas that would sabotage our relations with our allies; some people call that “first offer in dealmaking,” I call that “being an untrustworthy liar.”

Now, not all his positions are anathema to me, and he’s got some good features. For example, he has a lot of business experience, though a number of his business ventures have failed or gone bankrupt; people who know a little about business (but think they know a lot) call that “compartmentalizing his ventures to protect him from losses”; people who know a lot about business at scale call that “gross incompetence” as a real businessman doesn’t let a business setback get spun into a public bankruptcy. But he has lots of experience running really big things, and would likely manage the running of the office passably.

But we can’t let him do that. We can’t trust Trump to respect his office. We had a bad enough time Bush skating on the edges of impeachable malfeasance until Obama took over and showed us how being a rogue president was done – but both Bush and Obama respected the office. If given the opportunity, Trump wouldn’t respect a congressional subpoena – he’s the one who does the firing, remember? So we need to make sure not to give him power he would have to give up when he’s impeached.

Sigh. Jeb!, why’d you stumble? Hillary, what was in your head when you set up that email server? And Sanders? Cruz? And what about Robert Jefferson Shmickelwhaite, former mayor of Benson, Arizona, that almost unknown guy who should have run who had all the experience and all the right positions but decided to sit it out this round?

Regardless, I love America, and whoever wins is my President.

But, if you’re going to run, even if you’re a “populist” or “Master Persuader” or even just “Making America Great Again”, it would behoove you to look at the math and make sure you’ve got a ground game when the time comes to stop polling and start voting. Ground game – that is, an actual nationwide campaign organization that, like, gets out the vote for your guy or gal.

Pictured: Donald Trump, taken by Alex Hanson, used under the Creative Commons Attribution 2.0 Generic license, under which you are free to share or remix the work as long as it is attributed to Alex Hanson.