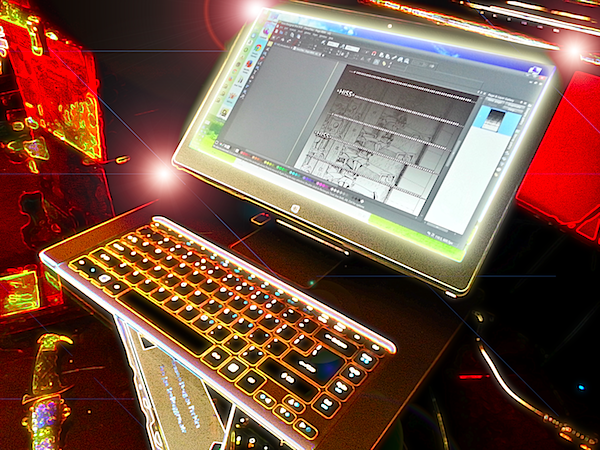 SO, I have this webcomic some of you may know about, f@nu fiku (that's Fanu Fiku, stylized with an @ sign, because aren't I oh so clever :-P). f@nu fiku is about Xiao Dreamweaver, a fifteen year old girl who can travel between all possible combinations of all possible realities … only she doesn't know it yet. What you may or may not know is that this webcomic is cursed. 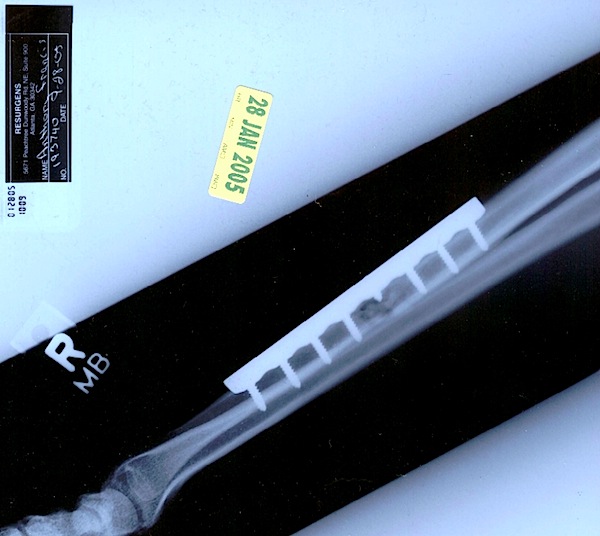 Early on working on f@nu fiku, I broke my arm in a karate match, forcing me to use guest artists and rough notebook scans for several months. I blogged that extensively, but what I did NOT blog - because it was too disruptive - was the failure of the computer and theft of the notebooks on which I did f@nu fiku.

Back then, I produced f@nu fiku on this great Windows laptop, but eventually its cooling fan gave up the ghost, and I decided - purely as an experiment - to try out an old Macintosh laptop that I had gotten in a clearance sale, since I already used a Mac at work. Four days in to this new laptop, I attended an art show in San Francisco - and my car was broken into.

Many books were stolen. My personal laptop was stolen. One of my writing notebooks was stolen, including the one with the original outline of the Dakota Frost series. My f@nu fiku sketchbook - in which I created the pages - was stolen. None of this was ever returned, of course, but I retained all the data, I had all the scans, and in theory I could easily have resumed the comic.

Only one problem: the laptop was stolen before I realized I couldn't produce f@nu fiku on the Mac.

I edited f@nu fiku in Corel Painter (a creditable replacement for Adobe Photoshop) and lettered it in Xara (a powerful, but much easier to use version of Adobe Illustrator). Corel Painter exists for the Mac … but Xara does not. At the time, I was completely inexperienced at Adobe Illustrator, and found working on the comic extremely difficult.

What's worse, at the time the Mac's support for Python wasn't so hot. I wrote the f@nu fiku webcomic software myself, but found that it adapted poorly to the Macintosh, requiring a partial rewrite of the image processing layer. I eventually got the software running, but by this point FROST MOON was taking off, and without meaning to, I let f@nu fiku drop.

Fast forward more than half a decade. I'm more committed than ever to Dakota Frost, but I'm also more involved than ever with the comic community - with Blitz Comics on the 24 Hour Comic Day Survival Guide, and with our umbrella organization, Thinking Ink Press. At Comic-Con, I got energized, and decided that I should resurrect f@nu fiku, perhaps even in print form.

At first it seemed impossible. Many originals were gone. Some of the completed art was corrupted. And all of the art was way, way too low resolution to be printed. It was depressing. And in truth, this is the real state I've been for the past few years on f@nu fiku: too depressed about it to come back to it, regardless of how much time I had. And I started to give up hope.

But it is a half a decade later, and I've learned to never give up hope. This was a hard won lesson: when I left the PhD program, I despaired of ever using my degree. Well, it took ten years, but eventually I returned to that work … and now, I'm using those skills more than ever. Over time, I've learned that the more patient and perseverant I become, the more I am rewarded.

So, when I started to lose hope … I really had just forgotten how paranoid I am about backups, and soon found the original scans AND backup copies of the completed art. And I had just forgotten how perseverant I have become, and how much I have changed my thinking about solving problems just like this one. And soon, after a little thought, I found a way to get high resolution images.

As before, I had a spare laptop lying around - this time a Windows 8 machine, that I'd tried as a replacement for the Mac (and quickly discarded for that purpose, though it isn't really bad). And IT will run Xara, and IT could load all my old f@nu fiku files. I don't know whether I'll try to save these as Illustrator files, now that I'm comfortable with it, but regardless, I now have a way.

I almost always find that if you think something's impossible, you're thinking about it the wrong way … and a solution awaits you nearby. I don't have to solve the nearly impossible problem of getting Xara to run on the Mac (I have tried virtual machines, but they were virtually impossible to use) but just the far simpler problem of using Xara on a PC to dump high-res images.

Now, I have almost 60 issues of f@nu fiku backlogged … more than a year's worth, almost ready to go. It will take me some time to get all of them beaten into shape, to rework the fanufiku.com site, to get set up on tapastic and get a posting schedule going. But it will be worth it: it will not only break this creative logjam, it will help me prepare for new comic projects, like Quarry.

So don't give up hope. It's just an excuse - just a way to give yourself license to wallow in self pity and to fall into inaction. Often enough, the files are saved on backup, the original scans are on disk, and there's a laptop laying around somewhere, waiting for the software to be installed on it that will give you the power to resurrect something you thought long dead.

You just have to have a little faith, and work a little harder.

Pictured: the Windows laptop, with Page 1 of f@nu fiku successfully loaded in Xara.

It was only a dream…

My friends Fred, David, Derek and I were on an Edge vacation somewhere - I don't quite know where - and Fred had rented a convertible to drive us around town. While we were there, we heard that they were going to blow up a mall as part of shooting some movie, and we decided to show up to watch.

We pulled behind a massive structure like Phipps Plaza in Atlanta, waiting in a long narrow street cutting through the big grassy fields behind the mall. There were a few other onlookers, maybe in the hundreds, but we pulled up in our convertible just as they were about to get started, so we didn't even get out.

Then the mall detonated. The parking structure behind it collapsed, tumbling down like the proverbial deck of cards. Giant concrete columns, easily three feet across, were tumbling over like dominoes.

Then something went wrong - one of the timed explosions was too powerful, or maybe there was a boiler overlooked in the security office underneath the parking deck. A secondary blast sent dozens of concrete columns flying, giant treetrunks sailing through the air - one of them right over us.

I looked up, frozen, as the column seemed to hang there in the air, long enough that it seemed to stretch out of our field of view to the left and right, wide enough to kill us. Then it began to shift in my vision, and I realized it was going to fall in front of us.

In that moment, I realized missing us would not be enough. I shouted, "Back up, back up, back up!" and Fred put the convertible in reverse. The column crashed to the ground in front of us and began rolling forward, bouncing - it would have rolled straight over the top of the car, flattening us. We screeched backwards, but quickly the column rumbled to a stop, and Fred stopped the car.

"Wow," Fred said, looking back at us. The column covered the whole road in front of us. More concrete columns were scattered all over the field, but miraculously no bystanders had been killed. "Normally I'm the first one to react. Good catch Anthony!"

I was not so sure.

Thinking over it later, there was no way Fred could have responded in time from my shout to put the car in reverse and start moving; he must have already been acting when I leaned forward and yelled in his ear, and in the confusion of events interpreted things after the fact to think that he'd reacted to my warning.

But what really struck me while Fred was congratulating me was my memory of that moment where the column was hanging in the air: that moment where I knew it was going to fall and hit or nearly hit us, and I didn't say anything because I was frozen. If we had to rely on that reaction time, we'd all be dead.