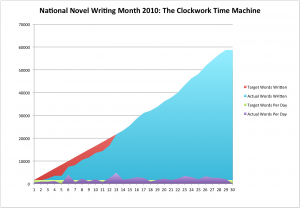 As usual, Nano’s raw rough-drafty stuff, but here’s where we are in the story (suitably snipped and edited not to give too much away):

The engines of the Machine spun up with a terrific rising whine and discharged all at once, lightning in a bottle, illuminating the entire diving bell interior with a crackling foxfire glow. Even the handcuff that pinned her left hand to a support arch shimmered as the transelectric field rippled through it, but as she was grounded to the same pole it left her with little more than a shudder.

As the Clockwork Time Machine rattled and clacked, ticked and swayed through the tunnels of possibility, Jeremiah hunched in a little ball by the pillar in her bloodied shift, her left hand high over her head, twisting uselessly in the cuff as two footmen stood over her, watching, their six-strings at the ready. It made her feel small and helpless, even though they’d made the mistake of cuffing her bad hand; but she hadn’t the heart to do her usual scheming for escape.

She had to see this through.