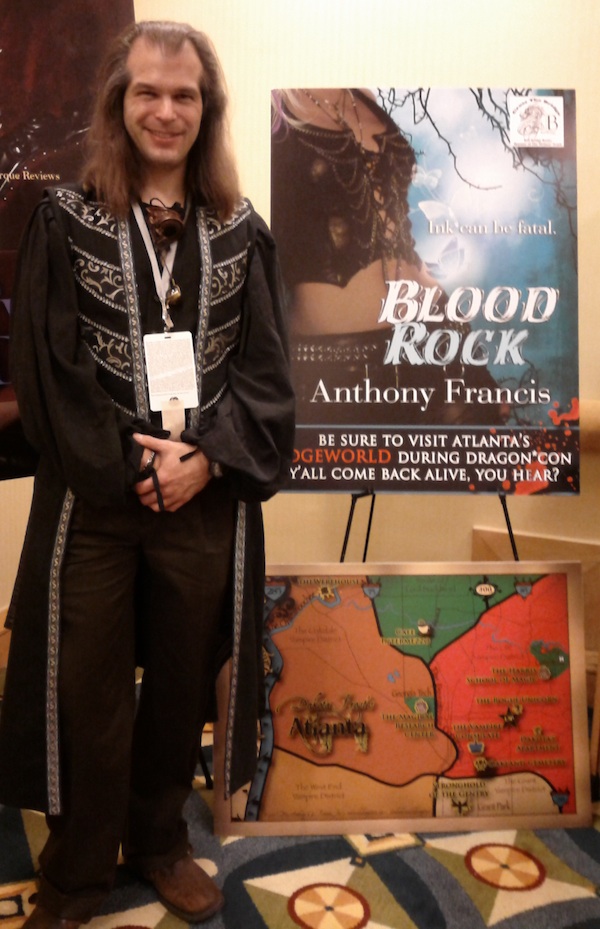 Who are you? Good question. I’m Anthony Francis, and I write stuff and make computers jump through hoops for a living.

What have you done? I’m most notable for the EPIC award winning urban fantasy novel FROST MOON and its sequel, BLOOD ROCK, which are about magical tattoo artist Dakota Frost and are therefore hopefully both more interesting than my ~700 page PhD thesis on context-sensitive computer memory. Also on the computer side, I’ve done some exploration of robot emotions.

What are you doing next? Forthcoming in the Dakota Frost series is the third book, LIQUID FIRE, and this November for National Novel Writing Month I plan to work on HEX CODE, the first in a spin-off series featuring Dakota’s adopted daughter Cinnamon Frost.

Are you working on anything other than Dakota Frost? I’ve also recently completed a rough draft of the first book in a new series, JEREMIAH WILLSTONE AND THE CLOCKWORK TIME MACHINE. A short story set in this universe, “Steampunk Fairy Chick”, will be included in the forthcoming anthology UnCONventional.

What are you working on currently? I’m also currently working on a fourth new series with the working title STRANDED, a young adult science fiction novel set a thousand years in the future, featuring a spoiled young centauress who must rescue a shipload of children who have crashlanded upon a world she wanted to claim as her own. This story’s set in the “Library of Dresan” universe from which this blog takes its name and which was setting of my very first unpublished novel “homo centauris”, which I am now happily milking for its 57 billion year backstory.

Anything else? I have a flash fiction story called “The Secret of the T-Rex’s Arms” to appear on the Smashed Cat Magazine. I’ve also published one short story, “Sibling Rivalry” in the Leading Edge Magazine. I have a webcomic, f@nu fiku, on hiatus. And I’m actively involved with helping people succeed at 24 Hour Comics through tutorials that I and my friend Nathan Vargas have put together at Blitz Comics.

Is that enough questions for now? Yes, it is. Please enjoy.