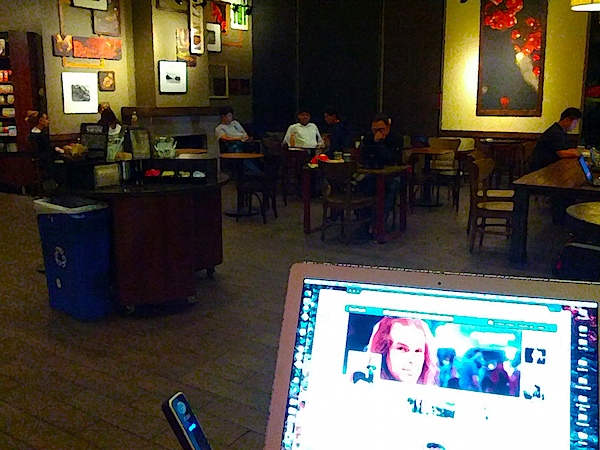 Recently a colleague asked me how I marketed my books since I “seem to be quite fabulous at it!” Well, *cough* I don’t know about “fabulous,” especially compared to authors like Diane Duane, Warren Ellis, Scott Westerfeld, and especially John Scalzi, all of whom kick my ass in that department. But I do have some ideas, and they do seem to work. So here we go.

First off, I’d love to say that promoting yourself all comes down to being authentic, but that’s not true. We all probably know people who are really authentic who aren’t popular – either because their true love is obscure, or because they’re abrasive, or because, in the end, they’re not really interested in being popular.

So what I really mean by being authentic is not promoting yourself for the point of promoting yourself. Little is more irritating than someone producing an enormous amount of hot air trying to market nothing more than thin air. Ideally, you should do good work, produce it regularly, and then, and only then, try to help people find it.

But even helping people find it can backfire. Most forums, whether online or in person, aren’t meant for selling products or services – so marketing language is simply unwanted. So my philosophy for promoting myself is to honestly contribute to the conversation – to do good work online, to produce it regularly, and then, and only then, to help people find my work.

So how do you do that? Well, by blogging and tweeting and Facebooking and plussing, of course. My hope is that I contribute enough to the conversation to make people intrinsically interested in what I say. Once that happens, the work I’m trying to sell to people are my books. Here are the things I do to promote them, as told to my colleague, with light editing:

The big thing that you should be trying to do with all the above is:

Basically, that’s it. I’d love to do more than that (I axually NEED to do more than that because actually part of my writer/developer schtick is that I’m the writer-designer-coder-maintainer of my own websites) but I work for a living and write in all the rest of my free time and still have a wife, friends and cats, so I can only do what I have time to do, and that’s it.
Then I go collapse into blissful unconsciousness.

There are some blogs out there which talk about marketing. Bob Mayer talks about it from an indie publishing perspective. My buddy Andy Fossett has written some articles on it from time to time and apparently had some success. Seth Godin has some interesting stuff to say about it. But in the end I just feed my head with those articles. I don’t really have a marketing plan.

I do know I need to market myself, and I do by creating a number of sites online where people can read what I write, by working hard to create interesting content on those, and then by hoping people get lost in the content I’ve produced. That’s why I wrote this article – because my colleague found the email that spawned it interesting, so I hope you will too.

That’s not enough, of course. There are billions of pages on the web. I make mine visible by advertising them. I’m fortunate that I can afford to do that, but I’m also taking a very long view towards my career – I advertised FROST MOON a year or so before it came out, and it paid off. But beyond a bare minimum of advertising, I don’t push it. I sit back and hope people like what I have.

Really, I don’t have time to do more – I have to write, so I’ve produced something people have a chance to like.