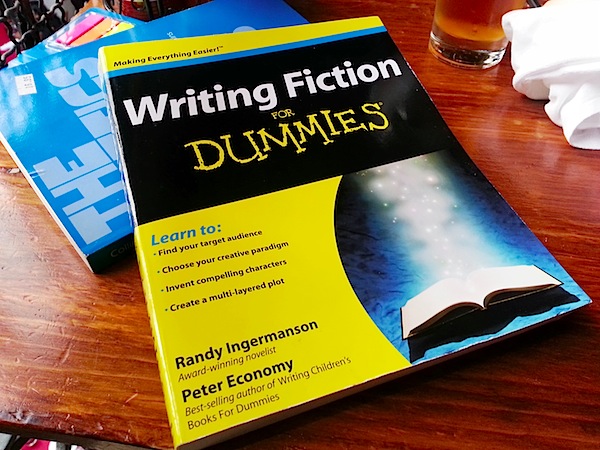 I’m a published urban fantasy author with two novels on the shelves, one of which, FROST MOON, won an award. I have two more novels in the can and I’ve just finished coediting an anthology with twenty stories based on an idea I proposed. I’ve read extensively on writing theory and even have written a few articles on the subject.

Doing whatever I can to get better at what I do, that’s what.

Once a friend saw the huge stack of theory-of-fiction books in my Library, one of which is “Novel Writing for Complete Morons” or some title a lot like that, and he remarked “wow, it’s probably been a long time since you had to look at that one.” Well, that happened to be true, but not because I read the book, then wrote some novels, and then grew beyond it.

The truth is, I’d already written one novel – and chunks of six or seven others – when I got “Novel Writing for Complete Morons.” Heck, I may have already written FROST MOON at that point. But I’m a book hound, and I look at everything. I came across the book, probably at a bargain bin. And I saw a chapter I can use. So I bought it.

I actually love reading overviews. I can dive deep into a technical book, but sometimes it’s only stepping back and summarizing the text – either by reading a summary, or writing one yourself – that enables you to hang the details upon a coherent whole. Even when the overview isn’t interesting, sometimes the book itself has details you simply can’t find elsewhere.

In the case of WRITING FICTION FOR DUMMIES, I saw it in a bargain bin, flipped through it – and found a section in a chapter on editing scenes, a task I’d just been struggling with on my third Dakota Frost novel, LIQUID FIRE. So I bought it, and tonight read a few chunks, some of which are good for structuring scenes, others of which were helpful in overall novel structure.

Some of that information is review; other parts are completely new. It doesn’t matter. It helped me move forward.

Creative expression is driven by ego, but it’s stifled by snobbery. Don’t get embarrassed by what you need to do to improve. If you were trying to climb out of a pit, would you hold your hand back from a rung that was candy colored and clearly intended for children? No. As long as the rung is solid, you grab it and pull yourself up.

Pictured: WRITING FICTION FOR DUMMIES, atop THE POETICS OF THE MIND’S EYE by Christopher Collins, a study of visual imagination in literature and cognitive science. See how hard it is to be honest with yourself and do what needs doing? Here I had to bring along a technical book I’m reading and use it to prop up the For Dummies book in an absurd attempt at credentialing.

No, I’m sorry, ladies and gentlemen: I may have happened to have picked up THE POETICS OF THE MIND’S EYE at about the same time as WRITING FICTION FOR DUMMIES, and I may have had it in my reading pile because I was evaluating whether to recommend it to a friend who works in the field of visual imagination, but the one has little to do with the other.

I, a published author, picked up WRITING FICTION FOR DUMMIES, and it had useful information for a problem I was trying to solve. Don’t be embarrassed about things like that: do whatever you have to to help yourself get better. End of list.