Jeremiah Willstone Is on Her Way 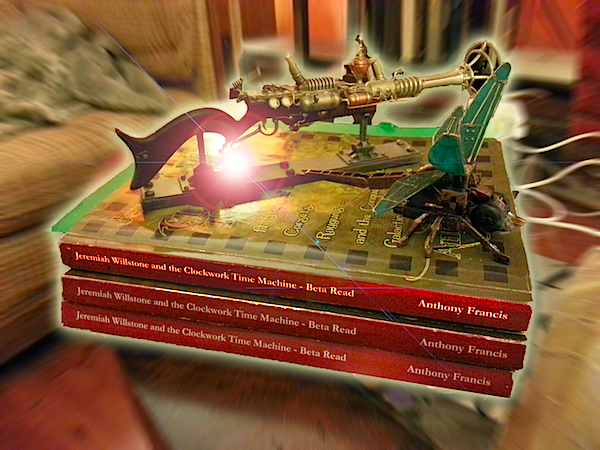 At long last, I have sent to the publisher my fourth completed novel, JEREMIAH WILLSTONE AND THE CLOCKWORK TIME MACHINE: A Story of Love, Corsets, Rayguns, and the Conquest of the Galactic Habitable Zone.

This has been a long time in coming – in part because I had the not-so-bright idea of doing a related anthology, DOORWAYS TO EXTRA TIME, which has put me a solid year behind on my other writing projects – and in part because I had a lot of work to do. Lots of authors put their manuscripts through heavy revision, but the way I track changes gives a pretty clear view of my process:

What’s less clear is the amount of research that goes into these books. For the story “The Doorway to Extra Time” I read parts of over 20 books on time travel. For THE CLOCKWORK TIME MACHINE, with its alternate histories and their intricate relationships, I read far more – dozens and dozens of books and hundreds and hundreds of web pages. 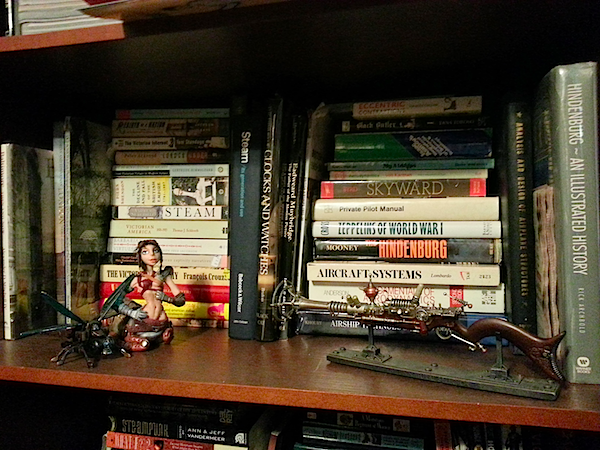 Now all that’s done, and the book is off to Debra Dixon at Bell Bridge Books. Hopefully I’ve learned from previous edits what it takes to make a great book; if not, I’m sure she’ll tell me.

As always, I leave you with an excerpt:

Lightning gouged a chunk of the wainscoting an inch from Jeremiah Willstone’s head and she hurled herself back, bumping down the stairs on her tailcoat, firing both Kathodenstrahls again and again until the oak doorpanels were blasted into sparks and splinters.

Her shoulders hit the landing hard enough to rattle her teeth, but Jeremiah didn’t lose her grip: she just kept both guns trained on the cracked door, watching foxfire shimmer off its hinges and knobs. The crackling green tracers crept around the frame, and with horror she realized the door was reinforced with newly-added iron bands. She’d intended to blast the thing apart and deny her enemy cover, but had just created more arrowholes for him-or-her to shoot through.

Jeremiah muttered a curse: the doors weren’t supposed to be reinforced! The Newfoundland Airship Conservatory was a relic, near sixty years old—and electric pistols had barely been invented when it was built in the 1850’s, much less Faraday armor. Yet this lot of miscreants had managed to erect in a few days barriers proof to the most modern thermionic blasters. In over nine years as an Expeditionary fighting the mad men and women who sought to let Foreign monsters onto the Earth, she’d never encountered a force as well-prepared as Lord Christopherson’s.

It made sense—the man had been in the Victoriana Defense League, and had their full playbook—yet there were dark rumors that he’d been bankrolled by Restorationist forces who threatened not just the Crown, but the Liberation Jeremiah held so dear. Given her history with the man, she hadn’t found the rumors surprising—but the complete lack of women soldiers among his ‘footmen’ practically confirmed them. Lord Christopherson wasn’t just in love with the monsters: he wanted to upend the whole Victorianan order. The man had to be stopped.

As the foxfire dissipated, the crackling continued, and Jeremiah’s eyes flicked aside to see sparks escaping the broken glass of her left Kathodenstrahl’s vacuum tubes. Its thermionics were shot, so she tossed the electric gun aside with a curse and checked the charge canister on her remaining Kathodenstrahl. The little brass bead was hovering between three and four notches. Briefly she thought of swapping canisters, but a slight creak upstairs refocused her attention.

Now that Jeremiah is on her way, I’m returning my attention to LIQUID FIRE, which has a due date of April 1st, with a hopeful publication date in August. Wish me well, and hope that I have a picture like the following for LIQUID FIRE ready in the next month or so… 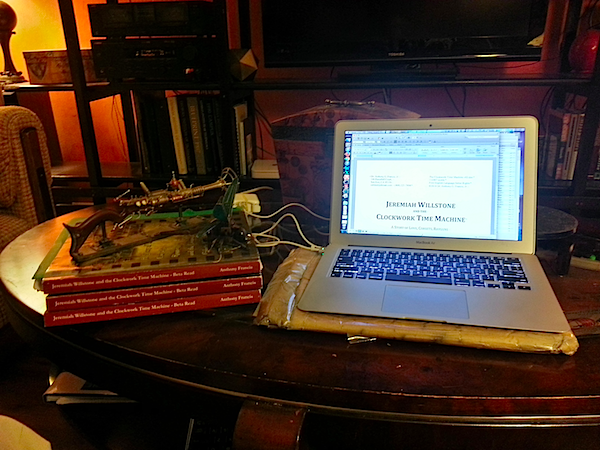