Making a Mac Useful, Part 2: Why an New iMac? 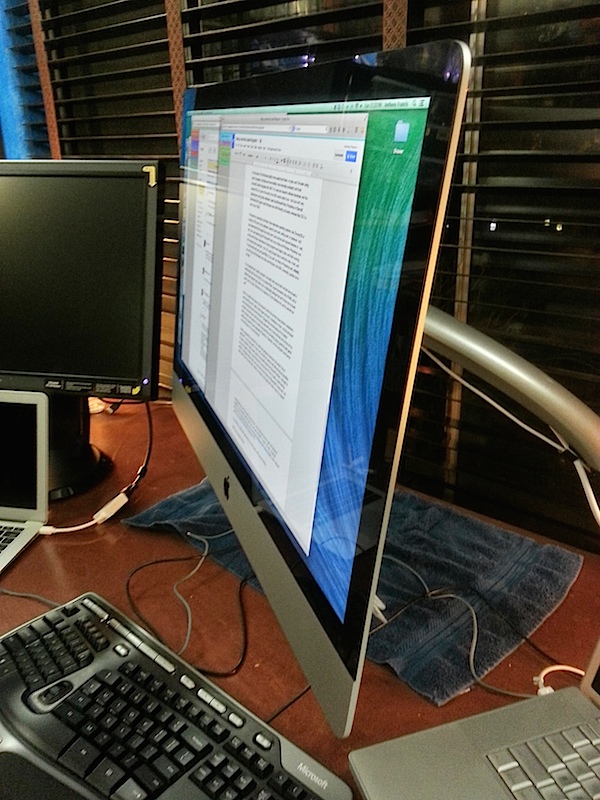 However, despite that, I find Macs are just about the easiest to use of the mainstream operating systems (the others being Windows and Linux), but I’ve been computing for a long time and have acquired many quirks – or, more charitably, special needs. Some of those needs are just my druthers on how I want the computer to run, and other needs are vital parts of my workflow for which, if the computer doesn’t do its job, I literally have to go find another machine to get the job done. And I don’t like doing that – so I’ll spend a week or two beating a machine into shape if it means I can flip the thing open for two or three years and just have it do exactly what I want.

Well, then, why not beat a Windows machine into shape? For the record, I find Windows slightly more usable than Macs – no joke, and I’ve been using both for decades – but Macs are more reliable, more internally consistent, and most importantly, better integrated with UNIX. I’m a web and research software developer, and the standard OS in my part of the world is the UNIX variant called Linux – but Linux isn’t very reliable when running other software I need, like Microsoft Word, Photoshop or Starcraft. Alternatives like Cygwin make Windows more UNIX-friendly, but barely; whereas Mac OS X is built on top of UNIX.

That leads me, inexorably, to the Mac. As I said before, other alternative operating systems, like ChromeOS or Android or iOS, don’t run the software I need for work work, writing work, or pleasure – and cloud alternatives like Google Docs simply don’t count as they lack required features or – wait, why I am I even defending this? Microsoft Word runs on Mac and Windows. Photoshop runs on Mac and Windows. Alternatives to these programs are largely a joke, and that’s coming from someone who uses them – a lot. (I’m using Google Docs to write this note, in fact, and I’m also familiar with and use OpenOffice). If you can’t run Word or Photoshop well, reliably, you can’t play. And that leads me to Mac and Windows. And UNIX, inexorably, pushed me to the Mac.

For my personal use, I need a computer I can easily carry around with me that has at least a half-terabyte hard drive (to hold ALL my relevant files), a good processor, lots of RAM, and a decent-sized keyboard and screen, all in a lightweight package that won’t throw out my back when I put it in a bag. That led me to a maxed-out 13 inch MacBook Air, and it’s served me well.

But for my central home server, the computer to which the primary house printer is attached, I need something more. I need a much larger hard drive – a terabyte or more – so the computer can simultaneously serve as the Dropbox / Google Drive remote backup of my laptop computer, and also have more than enough space left over to hold archives and mirrors of my older computers and copies of my wife’s computer files. Something zippy, good for both game playing and programming and especially Photoshop / Illustrator, so the computer could serve as an editing bay for my comic book art.

I briefly considered the new Mac Pros, which are gorgeous machines. But when I buy a desktop PC, I do my very best to “max it out” so that the machine will last as long as possible. A maxed out Mac Pro with screen came in at something like ten thousand dollars – enough to buy a new maxed out iMac, a new Windows 8 touchscreen PC for my wife, a new backup solution, a storage shed out back, and some very nice dinners at Alexander’s restaurant.

Now, there are drawbacks. iMacs aren’t really expandable. They’re also a bit behind the times, UX-wise: iMacs don’t have touchscreens. That’s a shame, but, on the other hand, it isn’t particular to iMacs: Apple overall isn’t really ready to support touch screens yet. There’s a claim that they’re not useful yet, but I have a Windows 8 laptop as well, and I’ve used a Chrome Pixel and an ASUS Transformer Prime, and I can tell you that you get used to the idea that you can manipulate objects on screen really damn fast. However, that means if you want a touchscreen, you’re going to have to get a Windows 8 machine or an Android machine (yes, you can get full-sized – I mean, 19 inch – Android all-in-one PCs [ http://shop.lenovo.com/us/en/desktops/essential/n-series/n308/ ], but I cannot yet find a full-sized Chrome OS touchscreen PC). Honestly, I’d rather have the applications that I want at this point, so Mac OS X is my only choice for now.

So an iMac it is: Microsoft applications, a UNIX base, and a price that fits.

Next up: the physical setup.