Hoisted from the archives … it was National Novel Writing Month 2013, and I was at the Write to the End writing group in IHOP and should have been writing on my book MAROONED, but I was very near my goal for the month, I had an idea, and was depressed about various feedback I’d gotten from work and life and editors and AAARGH! so I wrote this anyway.

SO anyway, IHOP. The Write to the End writing group normally meets in the side room, but not that night, and it’s because another group was meeting there. Presumably, they paid for that. Which is sad, because as a volunteer drop-in group we can’t pay for rooms. Nonetheless, IHOP feels like home moreso than most places we have met, even though it isn’t a coffeehouse and doesn’t have an attached bookstore. But I’ve learned, from the writing group, not to assume anything is permanent.

Write to the End has met in places that should have lasted forever, but didn’t. Maybe we should have expected the small indie coffeshop Snake and Butterfly to dial back their hours (since they opened later as an experiment, for us), but who’d expect that Mission Coffee would come to an end? It was up the street from a college. People came in there all the time. But the signs were there, literally: walls and walls of pictures of a live music group that no longer met on the night we wrote.

But why should it be this way? We once met at Barnes and Noble, which was in the Bay Area before I came out here, which outlasted Borders, which might be out here after I leave (here’s hoping I don’t). Why couldn’t we have been meeting at Café Borrone, which was running long before I came out to the Bay the first time, when I fell in love with writing in quirky coffeehouses?

But things change. Who could predict that physical books themselves might implode? If the bookstore next to Café Borrone, Kepler’s, disappears, so might Café Borrone. That’s why Barnes and Noble didn’t let us keep meeting there: B&N’s business model changed, and they needed fewer community programs and more space for toys.

Even coffeehouses might end. Coffee could be made illegal. Alcohol was once. Seriously. Some people think that coffee is simply a drug with no stimulus benefits—the buzz you get off coffee is just withdrawal relief, and coffee has all sorts of health problems. I’m not sure the epidemiology supports that, but the researchers are out there that think that in all seriousness.

Perhaps there will be a new Prohibition. Maybe one day our grandchildren will look back on this and say, oh, how terrible it was that, during the Health Pogroms, coffee was outlawed for ten years. “Of course, we have coffee back now, but think of all the old historic coffeehouses were destroyed.” Or even if coffee is not outlawed, we could have a Nazi takeover or a Soviet revolution or a Cultural Revolution that wipes out all of these types of meeting places.

So there are no firm places to stand.

But in Japan, there’s a hotel that’s been running for something like 1500 years — 400 generations in the same family. I know it’s a small bed and breakfast like hotel, but there are taverns in England that have stood since the 1500s. Think of it: we could have been meeting there, for the last two hundred years.

And that gives me hope, that we’re writing in the first two hundred years of the Write to the End group. 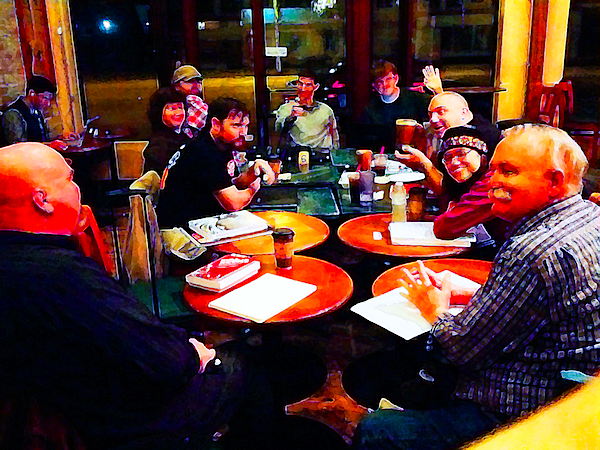