The Future of Books is Bright 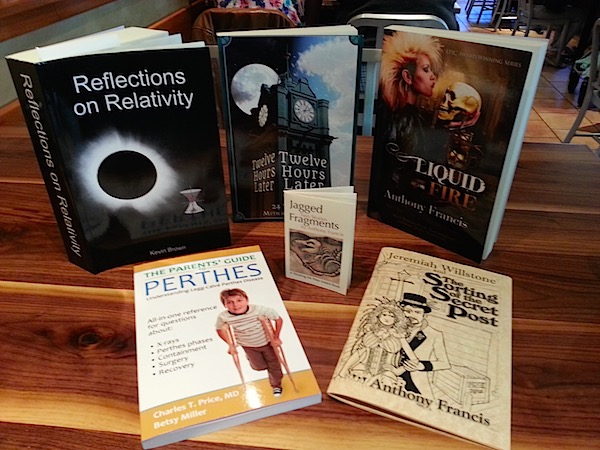 Some time ago my good friend Jim Davies said, “If I was a traditional publisher or bookstore owner, I’d be very worried about my business with the rise of ebooks” – and he’s right. While the demise of the bookstore Borders may be more properly laid to the feet of Walmart and Costco than Kindle and Kobo, ebooks have disrupted the traditional publishing industry. Once you had to, like, go to a place and shell money to get a thick tome; now you can pull books out of the air into a wedge of magic in your pocket, sometimes for free. If I owned a publishing company or bookstore, I’d be worried: the number of people who buy traditional books is dropping, and from Borders to Borderlands to Bookbuyers to Keplers, bookstores are in trouble.

But are books? At the time I interpreted what Jim said as indicating the demise of books, but he didn’t say that at all: he just pointed out the existential threat a business faces if two thirds or half or even just a third of its customer base disappears. A ten percent drop in a business’s sales might mean the difference between smiles and Christmas bonuses all around and a death spiral that five years later closes the business’s doors as prices inexorably rise and profit margins plummet. My fear was, as ebook readers get better and better and physical book purchasers got fewer and fewer, that the economies of scale would not favor book publishing. I had imagined that as fewer and fewer people bought books, the unit cost would go up, it would no longer be profitable to print books, and both books and bookstores would go away.

Once I thought that Barnes and Noble and similar stores would shift to an on-demand model, with shelves filled with single copies of books and with book printing machines behind the counter, running your order for your chosen edition while you got a cappuccino in the bookstore’s Starbucks, and, hey, maybe that will happen. But one thing I didn’t anticipate was the ability for print on demand distributors to create an effective and useful FedEx-like just in time model, where books are printed essentially as they’re needed, rather than enormous stocks being kept on hand – and the other thing I didn’t anticipate was applying paper arts to book production to create a new category of books as art, encouraging a bite-sized reading model and a love of the physically printed word. Now, I don’t know the details of Amazon’s or Barnes and Noble’s warehousing model. I do know that most of the books you see above were printed just in time for a recent event, and all of them represent departures from the traditional publishing model.

Some people have argued that we’ve hit the bottom of the bookstore market and it is getting better; it isn’t clear whether Barnes and Noble will survive, but local bookstores are having a comeback – but it’s not hard to look at the march of technology and to assume that things are going to HAVE to change. We no longer print books on scrolls, or parchment; the printing press disrupted the illustrated books model, and online news sources have dealt a serious blow to the newspaper industry – I wish I had a picture of all the newspaper boxes in Mountain View; there are a dozen of them at two or three places, and they don’t have any real newspapers in them anymore, just free magazines. This industry has collapsed radically within the last few years, and it’s hard not to think the same thing will happen to books as e-readers get better and better.

But technological updates are not always replacements. Phone screens are not a replacement for watching TV, and TV is not a replacement for movie theaters. I’d argue that more movies are watched on cell phones than at any time in history, and yet the most recent Star Wars movie has made something like a billion dollars from people going to an actual darkened room to watch the movie with friends and a bucket of popcorn. Similarly, movie theaters are not a replacement for actual theaters, plays performed with real humans in front of a live audience: even though movies have largely displaced plays, they haven’t displaced them completely. Perhaps one day they will, if only in the sense of being able to expose a wider audience to that of a play; but the experience you have watching a real human playing a role right in front of you is completely different than the experience of film.

The same thing is true of books. Sorry, e-reader folks: your interfaces are a joke. The contrast is poor, scrolling is slow, you can’t easily make notes or create bookmarks or – oh, I’m sorry, are you about to say that your bad low resolution stylus and awkward commenting interface and hard-to-discover notes and general lameness are somehow a replacement for flipping through a book, tossing in a piece of paper, and writing a brief note? Oh, go on, try it. I’ll write an essay before you’re done figuring out how to leave a comment. The point isn’t that it isn’t technologically impossible to solve this problem – it’s that right now, the people who make e-books aren’t even trying. They’re trying to increase contrast and resolution and battery life and page refresh rates and e-book distribution. The things I want out of books – that tactile sense, rapid note taking, rapid access, discoverability, the ability to stack a set of them in a pile as a reminder – are literally twenty or thirty years away. E-readers are, technologically, at the days of vector graphics, when real books provide you a tactile feel and a random access interface that’s superior to the best 3D TV.

One day they’ll get there. And one might assume that those awesome e-readers of the future, with all the books in history on them, in sharp color, with a fast random access – I imagine something that looks actually like a large paperback book, with a hundred or so flexible pages, all in glorious color that you can flip through, mark up, whatever, except you only have to carry one book – will kill traditional bookstores. But then I go into Barnes and Noble and see a section of vinyl records and go what the hell? There’s no way that you could have told me ten years ago that we’d be in a world where we’re not just likely to move past CD’s, but to move past iPods with local storage in favor of streaming, but that at the same time vinyl is having a resurgence. Supposedly this is because DJ’s like to scratch records, and audiophiles prefer the analog sound. Who knew?

And yet, at the same time, the production of books themselves is getting better and better. They’re being printed on better paper, with better typography, better book design, color covers, printed and embossed covers, the whole nine yards. As a publisher, I’ve been going around collecting new examples of awesomely printed books and just in the ten or so years I’ve been looking at this really closely the entire production process of books has become stellar and awesome. Sometimes I’m sad when I get an old book on a topic I like and open it up to find pages that look like they’re typed up on a typewriter. Back in the late 70’s, when Douglas Hofstadter published Gödel, Escher, Bach, it was possible to produce awesome books with awesome typesetting, but it was an epic struggle; Donald Knuth reportedly spent eight years developing TeX to help him produce The Art of Computer Programming. Now these tools are available to everyone with a computer – I’m a Word junkie, but even I recently downloaded MacTex to my computer while sitting in an internet cafe. Now anyone can produce something that’s truly awesome and get it printed on demand.

SO I can’t see the future of books being anything but bright. Physical books are going to be around forever, at least as a niche product, and possibly more; they’re getting better all the time – but if they get replaced, it’s going to be by something even better, and even if they do get replaced en masse by something awesome, there will always be people who will love and preserve the printed medium forever, bibliophiles motivated by the same love as theatergoers, audiophiles, and lovers of fine art.