Sunday is a Day of Rest 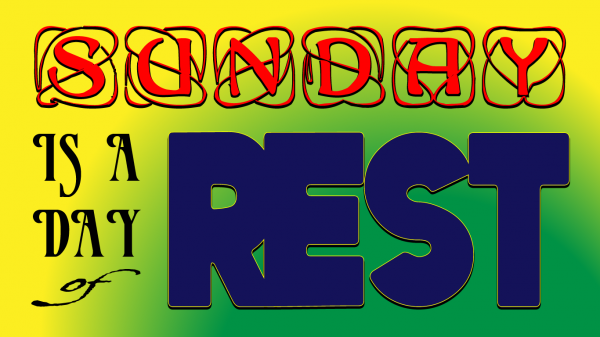 So I had originally planned on doing a full post each day of Lent, but to make things easier on myself, I decided it was better to respect the Sabbath and treat Sunday as a day of rest.

While we need the grace we get from, say, the Eucharist, the purpose of going to Mass is to worship. But Sunday isn’t just about setting aside a day of rest to contemplate God: it’s about setting aside a day of rest for ourselves – at least one day out of the week that we can recharge. It’s great if we can focus that on God, and that’s why the Hebrews had such strict rules about what you could do on Sunday, rules that continue today in the Jewish community and in our former Blue Laws.

But God knows that we need rest and recuperation. The job of living never stops, and it’s good for us to take out at least one day to recharge – if we don’t make time for it, we can work ourselves to death. As Jesus said, “The Sabbath was made for man, not man for the Sabbath.”

One of the ways I respect Sunday is to avoid shopping unless it’s a necessity. Another is to attend Mass (in the before times) or to watch online worship (in these days of the zombie apocalypse). But I’m not altogether good about respecting it, either religiously or personally. And rather than working to 4am again, I instead decided, let’s respect the Sabbath, and just share a link of what I’m reading.

Gifts of God for the People of God is a devotional book about the Episcopal Mass by Reverend Furman Buchanan, the priest of St. Peter’s, my East Coast church (and where I and my wife were married).

In this book, Buchanan breaks down the parts of the Holy Eucharist and shares explanations of their structure, theological function, and deeper meaning. It’s a personal book, in which Buchanan shares experiences from his own life; but it’s also good for study groups, with each chapter ending in a series of questions and challenges. My West Coast church, Saint Stephen’s in-the-Field, has used it successfully in a Lenten study course, which inspired me to finish this book (which I had already started) for Lent.

I recommend this book. The Holy Eucharist is deeply meaningful to me and I was gratified when I left Catholicism to find a surrogate communion which understands this form of worship as well, if not better.

The former priest of Saint Stephen’s, Reverend Ken Wratten, once claimed “Jesus says we can take our Sabbath whenever we want to,” pointing out even though he celebrated Holy Eucharist on Sundays, it and Saturday were working days for him, so he took Monday as his actual Sabbath. I wouldn’t go quite as far as “whenever we want to” (though there’s a lot of evidence backing up Father Ken’s claim, including the decision in Acts of the Apostles of the Jerusalem Council that Gentiles don’t have to follow the law of Moses) but I would encourage you to take a day of rest in your week whenever you can.

P.S. Forgive my horrible color scheme on the graphic, I wanted to whip something up quickly in Illustrator and it started fighting me, so I didn’t get to do the pass I’d normally do of trying out a variety of schemes in color-scheme-picking-programs to compensate for my color blindness.