This … this is WORKING … 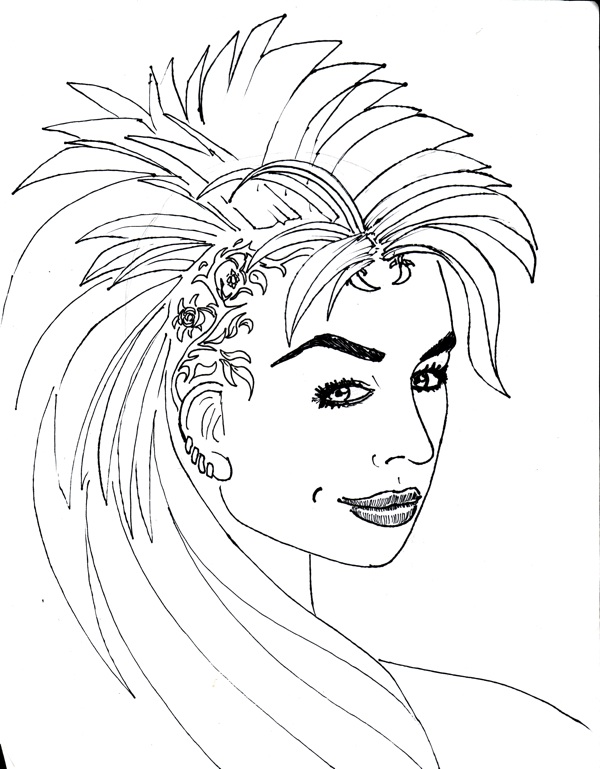 Oh ... oh my goodness. I'm working on a revised version of Dakota's face for the frontispiece of Frost Moon and ... and ... "working" is not just a metaphor. This is actual work. I'm sketching, and soon after that I will be writing again on Liquid Fire or Jeremiah Willstone. As part of real work, and not just some crazy hobby anymore.

-the Centaur
Pictured: the revised face of Dakota Frost for the frontispiece, pre-cleanup and compositing into the original drawing.

“What is life? No scientist can tell you. Oh, the pocket-protector variety will say that living things move, eat and grow, wrapped up in ten-dollar words like ‘locomotion’ and ‘intake’ and ‘self-organization’. But these by themselves are not life: a waterfall moves more vibrantly than any animal, a fire eats more efficiently, a crystal is more organized.

“But life is not any one of these things: life is all of them together. It is the combination of moving and eating and organizing, of metabolism and reproduction, of a thousand things more. Put them all together, and you get more than you started with: a holistic—holy—combination that is more than the sum of its parts. Life is magic.

“Or more precisely, magic is life,” I said. Nowhere was this more clear than with my traveling companions, werekin and vampires whose very biology was woven with magic; but since they would not approve of outed just so I could make a point, I instead picked on myself. “I know this, because I’m a skindancer. I ink magic tattoos that only work because their magical lines are laid on a living canvas that powers them. Each tattoo is like a circuit, that captures the intent of the wearer and projects it out it into the world. But it is the flow of the blood beneath the flex of the skin that powers them: without that life, they’d be useless.”

I don’t know what got me on that dissertation, but when I was done, the airline stranger in the seat to my left—a cute granola girl, curvy almost to the point of chubby, with a refreshing patchouli scent and dirty blond hair so curly it looked like coils of copper wire, I mean, really, just my type, down to the nose ring—put her magazine down and looked at me quizzically.

0
... still on schedule, but still not ahead because I am still sick and crashed out for hours after Thanksgiving brunch (or maybe that was the turkey).

Still, Not good. I'd say it's time to go to the doctor but this on-again-off-again sniffle, cough, randomly crash out for three hours always seems like "it's getting better".

Even though it ruined half of my Thanksgiving day, I went to sleep last night actually thinking my cold was probably about over.

Today: carshopping, housecleaning, and, oh yeah, I need ~3800 words to stay on target, ~6500 to get back to where I should be if I'd been keeping up with 1666 words a day from the beginning, and 11,580 words to finish Nanowrimo completely.

0
...things progressing nicely. 23,288 words, 26,712 remaining. If I keep up this pace (not altogether likely, in fact, but here's hoping) I will actually finish Nanowrimo early.

0
That is all. I now resume my regularly scheduled Nanowrimoing.

0
Between the new cat, work, finishing up Blood Rock, and business with Frost Moon, I've gotten far behind on Nanowrimo this month. But now I'm back on track, have finished a more detailed outline which solves some of my plot problems and gives me some fun crunchy stuff to work with ... and have finally caught up to my first day's target word count, ~1700 words (you need to do at least 1666 words a day to complete Nano). Hopefully things will speed up from this point ... need to do ~1933 words a day to finish successfully.

Let’s Give This Thing a Shot

0
The only way to make something happen for certain is to prioritize it. Normally when Nanowrimo rolls around I become a submarine and don't blog so much, but if the inhuman writing machine that is Warren Ellis can blog multiple times per day in between writing comic book epics, then so can I, dag nab it.

0
Well, it is that time of year again: November, and National Novel Writing Month. This year I'm working on Book 3 of the Dakota Frost series, Liquid Fire, which features Dakota, firespinning, and dragons:

What is life? No scientist can tell you. Oh, the pocket-protector variety will say that living things move, eat and grow, wrapped up in ten-dollar words like ‘locomotion’ and ‘intake’ and ‘self-organization’. But these by themselves are not life: a waterfall moves more vibrantly than any animal, a fire eats more efficiently, a crystal is more organized.

But life is not any one of these things: life is all of them together. It is the combination of moving and eating and organizing, of metabolism and reproduction, of a thousand things more. Put them all together, and you get more than you started with: a holistic — holy — combination that is more than the sum of its parts. Life is magic.

Or more precisely, magic is life.

As usual, I have a theme, plot, and know almost exactly how it will end. But more than the previous two books in the series, I feel like I'm stepping off into a great void, even though the magic of this book - firespinning - is an art I myself perform, unlike the tattoos featured in Frost Moon (of which I have none) and the graffiti featured in Blood Rock (of which I have done none). All I have to go on this one are love, fire ... and the nightmares from the Hadean.

Wish me luck.
-the Centaur

Frost Moon Back In the Hands of the Editor

Frost Moon, the first novel I wrote that ever got serious interest from a publisher, is now back in the hands of the editor. Things are looking good, we're on the same page for the first twelve chapters ... though, sadly, their 2009 schedule has filled and there's no way the book is going to come out before the beginning of 2010.

Now it's the race to finish the edits of Blood Rock by the end of October, so I can send it to my beta readers and start work on "Liquid Fire" for National Novel Writing Month...

1
So, this weekend I finished the revision of Frost Moon, 2007's Nanowrimo entry, and have submitted it back to the publisher. Initially they sound pleased and hope to get back to me soon - very promising! I have deliberately not mentioned the name of the publishing house so as to "not jinx it" but once I hear back yea or nay I will spill the beans.

In the meantime, I have returned to work on Blood Rock, the sequel, now at 100,000 words and going strong. I suspect I'm closing in on the end here; the current word count includes a lot of notes that will be chopped in the final draft, so hopefully this will come in at under 120,000 words.

As I mentioned before, I have already started work on the sequels, Liquid Fire and Hex Code. I have ideas for many more in this series, and plan to keep doing them as long as they're fun. I'll put up more information when I do the site redesign, hopefully in April.

-the Centaur
By day, Anthony Francis makes computers smarter; by night he writes science fiction and draws comic books. He lives in South Carolina with his wife and cats but his heart will always belong in Atlanta.