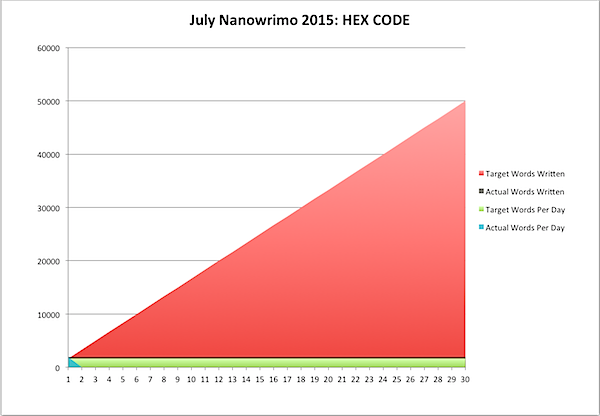 Well, I haven't finished editing THE CLOCKWORK TIME MACHINE in June like I wanted to, but it's now July, and I'm out of time. So it's back to another Nano challenge, the Camp nano challenge for July, in which I'll write 50,000 words of the Cinnamon spin-off novel, HEX CODE.

After much struggling, I have come to accept that this Cinnamon Frost novel, which comes between Book 4 and Book 5 of the Dakota Frost series, can go nowhere else other than between Book 4 and Book 5. if HEX CODE had happened before Book 4, SPECTRAL IRON, the story would collapse: Dakota could solve the problem with one phone call, if that, and my 150,000 word book would collapse to a 30,000 word novella. Same thing with PHANTOM SILVER: if HEX CODE hadn't happened immediately before Book 5, half the plot would collapse, and I'd need to contrive reasons to do things which are completely natural.

But I still owe THE CLOCKWORK TIME MACHINE to Debra sometime before the end of August for the book to come out this year, and I still need to get SPECTRAL IRON to Debra by January 31st of 2016 so it can come out in 2016, and PHANTOM SILVER to her by January of 2017 so it can come out in 2017 … which means HEX CODE needs to be done in the middle of 2016 so we can get that book out between Books 4 and 5. That means I need to write something like 50,000 to 100,000 words in the next six months, and edit the draft, and send it to beta readers, and edit it again, all on top of everything else I'm doing.

I sure do live in interesting times.

But I'm done with my word count for today, so I'll be diving back into CLOCKWORK for the rest of tonight. And I've got a long weekend coming up, with all next week off leading into Comic-Con, with no responsibilities for Comic-Con itself this year (thank God) other than showing up and having fun, so … perhaps this is going to work out.

Oh, right, an excerpt! I think that's safe in this case. From today's first draftiness:

I tenses up. I knows where this is going.

“I,” Mom says, whapping my leg, “am not my mother. I remember fighting monsters and wizards with you. You are reckless and amazing, and I’d love to say you can definitely take care of yourself … but I also remember you’ve been kidnapped, and you nearly set the city on fire.”

“You are not formally grounded,” Mom says. “But I don’t want you going on a run—”

“—don’t want you going on a run until the situation and your vitals are more stable,” Mom says, pointing at the heartbeep machine. “Not until we can get more security for the house, and coordinate a plan to keep you safe away from the house—”

“You run with Tully,” Mom says. “You ran with hunts at the werehouse. Did any of that spoil it? Look, Cinnamon, I’m not stupid. I will find out if you have snuck out … but I can’t stop you from sneaking out. You’re an experienced and stealthy street tiger who can turn invisible, and I’m a weak mortal human who needs to sleep. You will get out if you want to. But we’re in a difficult and terrible situation in which our friends are literally exploding and you were attacked so hard it put you in the hospital. All I ask is that you not go for a run until you heal up and the situation calms down, and that if, God forbid, you’re crawling the walls so much you can’t stand it, find a friend from the werehouse and go on a run with a partner.”

“Fine,” I says at last, fuming. But I’m really smart … and I’ve seen the escape hatch.

Mom stares off in the distance. “I know you’re really smart, so I want you to think about what our friend Special Agent Philip Davidson would call operational security. Think about what you can do to make it hard on the bad guys. Change your time, change your route, run with a friend or even a whole hunt—and text me your location. I promise not to freak. In fact, if you’ve done something bad and you need my help, I want you to say that. Tell me, “don’t freak”—but tell me, or I swear to God I am going to ground you until the heat death of the universe.”