Where is BLOOD ROCK? 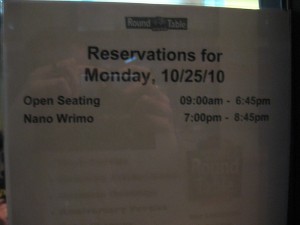 I would like to purchase Blood Rock, but I have not been able to find it anywhere.... Can you direct me to a site which has it for sale? If it is in fact for sale? I am a little curious since your site says it is in Beta release, but the site has not been updated in several months, so I am unsure as to the status of the book.

Well, sorry about that ... Blogger changed their terms of service and the Dakota Frost site is frozen until I can fix it. The answer? BLOOD ROCK is in editing right now - the publisher wanted some big cuts, but I'm in the last throes of National Novel Writing Month right now and had to put BLOOD ROCK down while working on my new series. I'm picking up BLOOD ROCK December 1st and hope to have it to the publisher before the first of the year, so if all goes well it will be out in March. I'm well into the sequel to the sequel, LIQUID FIRE, which I hope will be out the following October. -Anthony

With Patrick’s blunderblast slung over her shoulder, Jeremiah whizzed through the streets on her autocycle, discharging its cylinder flat out, its teakettle scream and clanking frame adding another layer of mist and noise to the steam and bustle of Boston. Her legs were tensed, her knees bent against the pedals, half to jump the cycle over curbs, and half to keep the juddering vibration from the cobblestones of Beacon Hill from rattling her tailbone clean off. She squealed to a stop before the Moffat’s, pulled the cylinder and tossed it to a street urchin. “Top me off?” she asked, hopping off onto the sidewalk with a whirl and pulling her bag out of its basket in one smooth motion. “Yes, ma’am,” the boy said, taking the cycle. His eyes lighted on her vest, her denims—and on the big brass buttons on her lapels, a steering wheel, sword and airsail overlaid with a stylized V. “Are you an Expeditionary?” Jeremiah smiled. “Yes,” she said, ruffing his cap so that tufts of blond hair showed. “Maybe one day you’ll become one too. Polish the brasslite a bit and there’s a second shilling in it for you. Quick now; I won’t be long.” “Yes, ma’am,” he said, walking the cycle off. Jeremiah turned to the tottering three-story shop, glancing up at the enclosed balcony jutting out from the newer brick buildings around it. Beneath the balcony, carbide-etched into the thick window of carbonate glass, were the words: MOFFAT’S MECHANISMS & MYSTERIES Her mouth quirked; as usual, today she was in the market for a bit of both.

Unlike last year, I didn't have to write 38,000 words in only ten days. But I did do pretty well; I still have a few days of writing left and I'm going to try to push further on the story. [caption id="attachment_797" align="alignnone" width="450" caption="Victory Point for Nanowrimo 2010"] 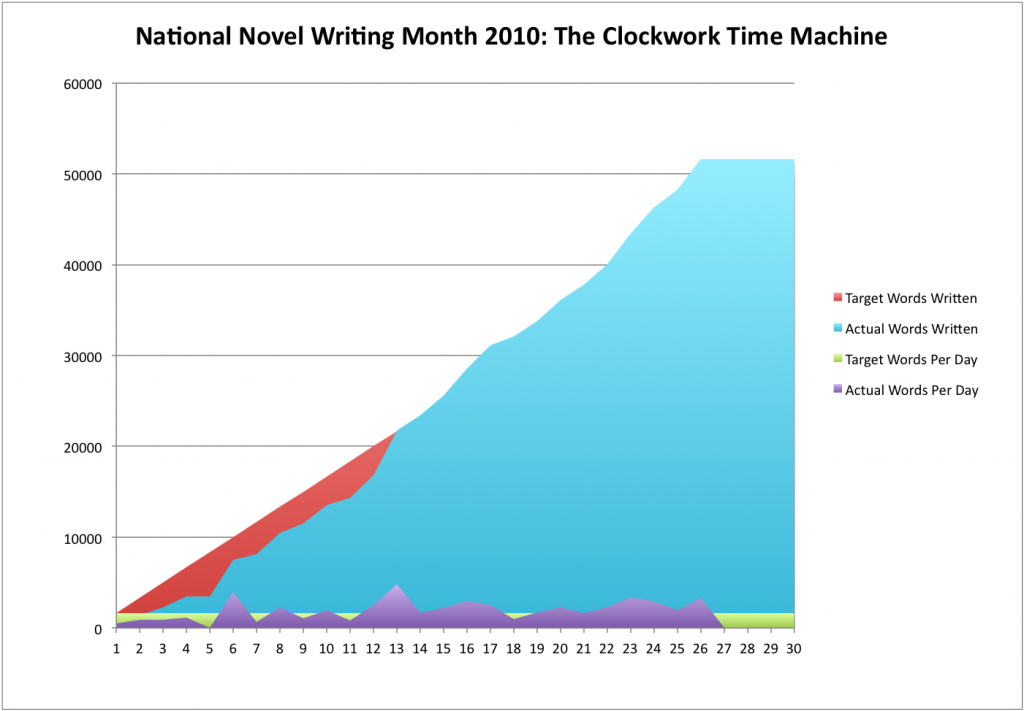 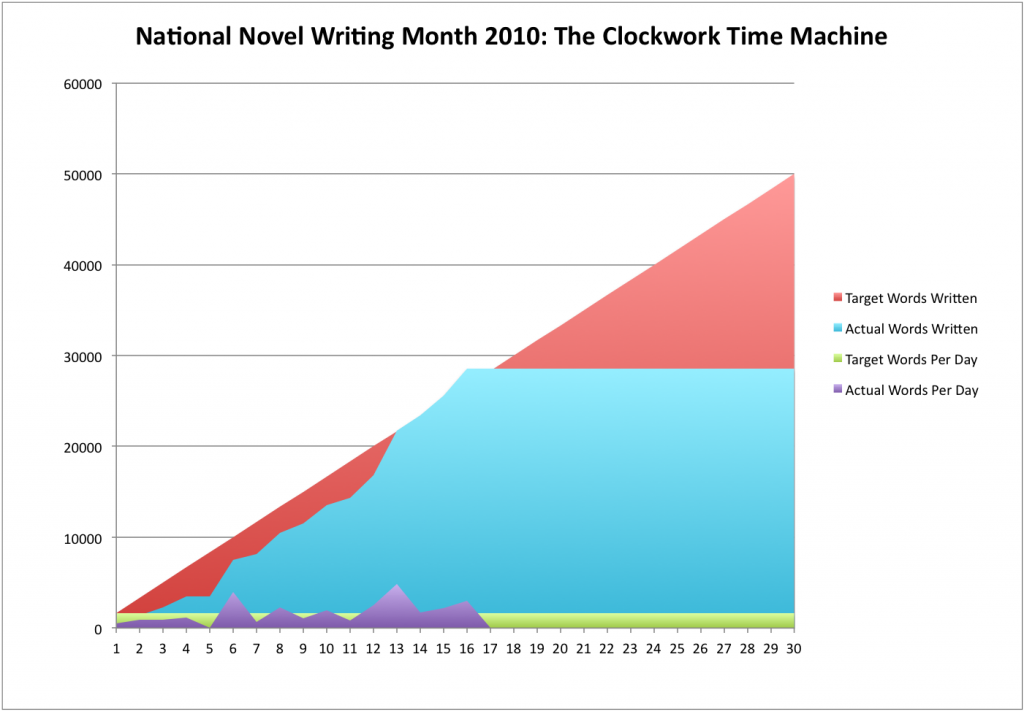 “Then we shall follow,” Sir Alice said. “Commander Willstone!” “Yes, sir?” Jeremiah said, standing at attention. “It seems that Lord Christopherson has cracked the secret of travel to the past,” Sir Alice said, her own objections, once overcome, completely forgotten. “Outfit the Prince Edward with one of his own devices and hunt that blackguard down to the very ends of time,” she said. “I’ll see no-one destroy Victoriana on my watch, much less undo Liberation!” “Yes, sir!” Jeremiah said. “Prevail, Victoriana—” Lord Birmingham cleared his throat. “Sir Alice, might I remind you that the destination the Lady Georgiana has charted is over the dark heart of Georgia?”

Caught Up At Last 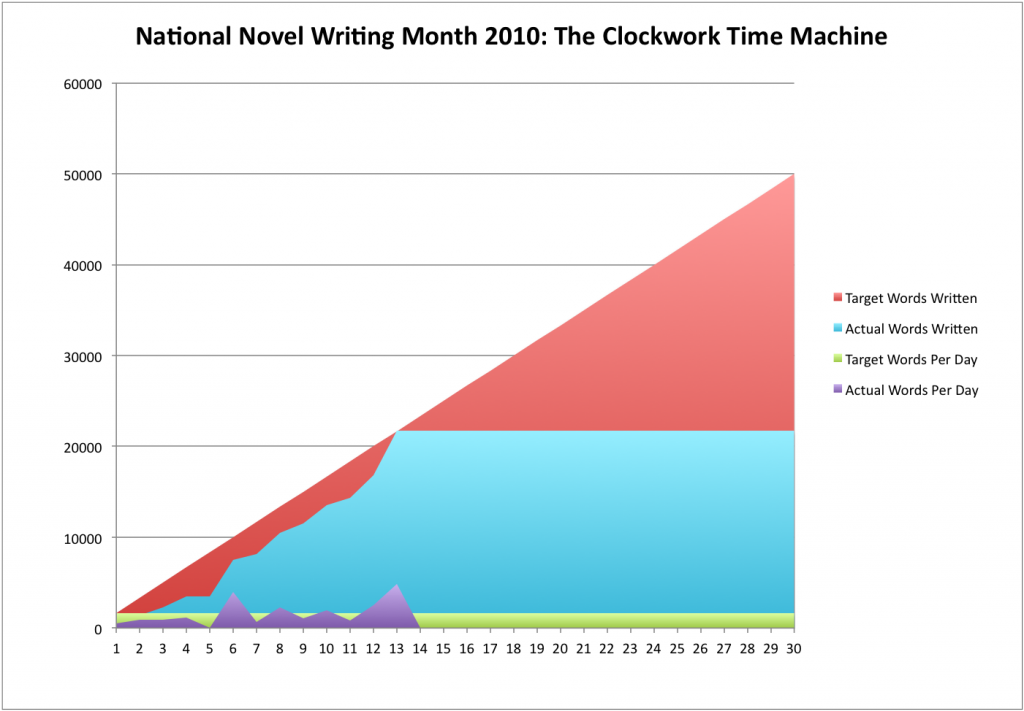 33,569 words. 21,696 of them new. The goal for November 13: 21,666. I know technically it's November 14, but I'm going to bed now and have a full day ahead of me in which I only need to write the nominal 1,666 words, so I am officially caught up at this point. And as the graph shows, finally the rising tide of words completed has caught up with the solid line of words desired. Yaay! Here's a bit to tide you over: rough drafty stuff, as all Nano is, but it's getting the scene set down the way I want it:

Jeremiah stepped out into the street, taking in the smells and sounds of Boston: cold air, wafting soup, crackling leather, fragrant horses, whirring gears, walking feet. God, she loved this town. “Here you are, Commander,” a young girl said, walking her cycle up. “Thank you, dear,” Jeremiah said, pulling the boy’s two shillings out and adding a third for the girl. “Apportion it fairly among you.” “Yes, Ma’am,” she said—then gasped. “Oh my goodness!” And Jeremiah followed her gaze to see the Prince Edward shimmering into existence above them, a rope ladder tumbling down towards her. “All right!” she said, leaping up onto a horse-tie, then into the air to catch the ladder. Her weight brought it down, just slightly—taking tension in the rope, of course, not lowering the Prince Edward—and as she swung back she reached down towards the girl. “Heave it here!” “Are you all right, Ma’am?” she cried, even as she raised the cycle. “Never better!” she said, seizing the cycle with her free hand. Predictably the Edward didn’t wait, and in moments she was rising above the street, holding on to the ladder with one hand and the bike with the other, trusting the boomsman to keep her clear of the buildings as she ascended into one of those singular adventures that enlivened her life.

Off to bed. -the Centaur

0
Well, National Novel Writing Month is progressing slowly but surely so far; I'm behind, but not super behind, and most importantly, not falling further behind: and the daily deficit is keeping constant. Today I have some extra time, so I will try to get caught up completely. You can see how far I've gotten on the graph below: [caption id="attachment_734" align="alignright" width="450" caption="Progress on Nano So Far"] 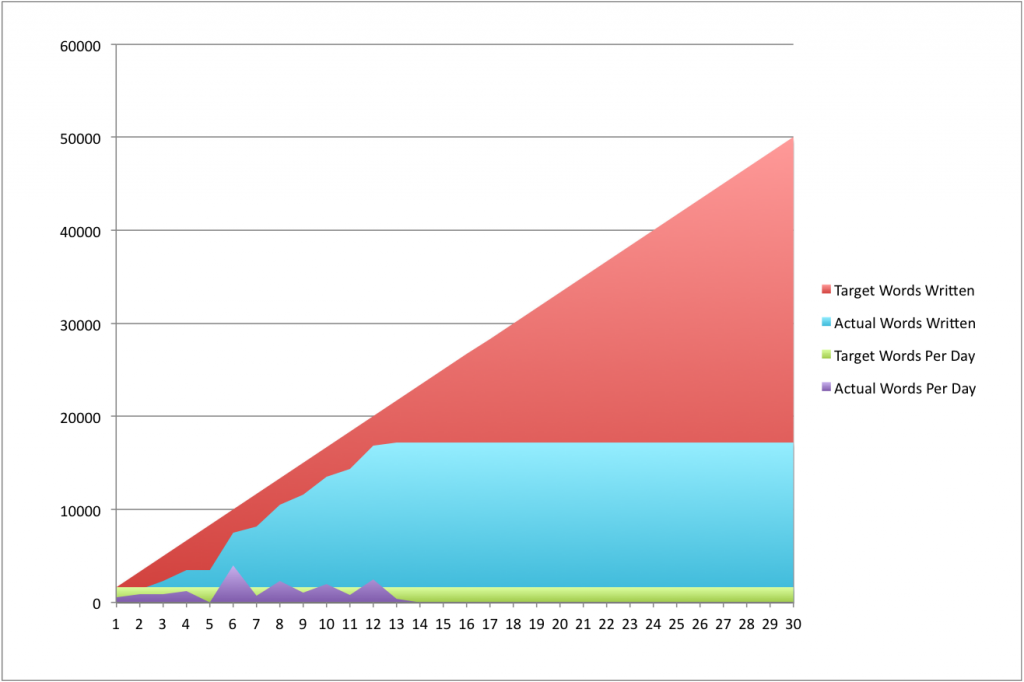 [/caption] I'd say this is procrastination, but it really does help to know just how far behind I am, and how much I need to write each day to catch up. Plus, I can reuse this Excel graph next year (this is actually a slight refinement of last year's Nano graph for Liquid Fire). Also, to save time, for the first time I'm using WordPress's scheme for inserting and saving images, rather than my own. Downside: problems if I need to leave WordPress, but I'm a big boy now, and can write my own converter and URL rewriter if I need to. Upside: time, of course. Oh, I almost forgot ... the excerpt! Here's where we are now:

Without a second thought, Jeremiah decked the guard. One fist, one punch, flying out, clocking her jaw and laying her out, ten feet out on the tile. The gun spun away, impacted, fired, the deadly bullet shattering a storefront of glass. There were shouts, screams, and panic, but to Jeremiah’s delighted horror the crowd did not scatter like civilians. A dark-suited man saw the guard fall and came at Jeremiah; a frilly young girl in a beret saw the gun and dove for it. “Capital,” Jeremiah said, ducking one punch, blocking the other, popping the man on the jaw, then kneeing him in the groin when he didn’t fall. “Absolutely capital!” she said, kicking the gun away into the glass just as the bereted girl seized it. Jeremiah clamped both hands on the girl’s arms to neutralize her, lifted her up, and said, “I’m so proud of you!” before head-butting so hard her beret came off and she fell back in a sudden spray of hair, eyes rolling. “We should go,” Patrick said, shepherding Georgiana out of the darkened cave of the restaurant. “Did you see,” Jeremiah said, blocking another punch, kicking her new assailant in the gut, then decking a third man. “These people have spines!” “Very much so,” Georgiana said. “Good for them, but for us—” “Fear not!” Jeremiah said; there were no more instant heroes popping out of the crowd, but there were still the shouts and screams and now whistles blowing, so it was very definitely time to go. “Follow me, thataway!”

Onward! Wind up your braces, let's do this... -the Centaur

0
Once again Nanowrimo approaches ... every November, a collection of insane people around the Earth get together to write 50,000 words of a new novel in 30 days. I usually tweak the rules and write 50,000 MORE words on top of some seed of a few thousand words I've already started. This year, I'm doing Jeremiah Willstone and the Clockwork Time Machine, what I hope is a twist on the steampunk mythos:

Xenotaur on Nanowrimo.org Synopsis: Jeremiah Willstone and the Clockwork Time Machine On an alternate Earth, the feminist revolution started a century early, technological progress doubled ... and Mary Shelley's granddaughter Jeremiah Willstone is an adventurer defending the world in a flying airship! She's used to fighting off monsters with nothing more than goggles, an electric gun and the advice of a half-human computer, but what will she do when her own uncle changes the rules of the game ... with a Clockwork Time Machine? Excerpt: Jeremiah Willstone and the Clockwork Time Machine Lightning gouged a chunk of the wainscoting an inch from Jeremiah Willstone’s head and she hurled herself back, bumping down the stairs on her tailcoat, firing both Kathodenstrahls again and again until the doorpanels were blasted into sparks and splinters. Her shoulders hit the landing hard enough to rattle her teeth, but Jeremiah didn’t lose her grip: she just kept both guns trained on the cracked door, watching foxfire shimmer off its hinges and knobs. The crackling green tracers crept around the frame, and with horror she realized the door was reinforced with iron bands. She’d intended to blast the thing apart and deny her enemy cover, but had just created more arrowholes for him-or-her to shoot from. As the foxfire dissipated, the crackling continued, and her eyes flicked aside to see sparks escaping the broken glass of her left Kathodenstrahl’s vacuum tubes. Its thermionics were shot, and she tossed it aside with a curse and checked the charge canister on her remaining gun. The little brass bead was hovering between three and four notches. Briefly she thought of swapping canisters, but a slight creak upstairs refocused her attention. No. You only need three shots. Keep them pinned, wait for reinforcements.

Like last year, I donated to help keep Nanowrimo running, and if it's helped you you should think about it as well. If that's not in your budget, try setting up or joining a local Nanowrimo group. I participate in the South Bay Nanowrimo group, and I'm trying to organize one at the Search Engine That Starts With A G if I can get enough people to participate. Happy writing! -the Centaur