Back to the Future with the Old Reader 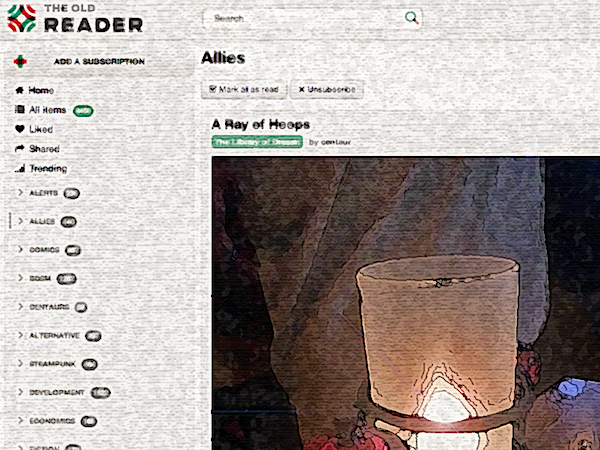 As I mentioned in a previous post, Google Reader is going away. If you don’t use RSS feeds, this service may be mystifying to you, but think of it this way: imagine, instead of getting a bunch of Facebook, Google+ or Twitter randomized micro-posts, you could get a steady stream of high-quality articles just from the people you like and admire? Yeah. RSS. It’s like that.

So anyway, the Reader shutdown. I have a lot of thoughts about that, as do many other people, but the first one is: what the heck do I do? I use Reader on average about seven times a day. I’m certainly not going to hope Google change their minds, and even if they do, my trust is gone. Fortunately, there are a number of alternatives, which people have blogged about here and here.

The one I want to report on today is The Old Reader, the first one I tried. AWESOME. In more detail, this is what I found:

There are drawbacks, most notably: they don’t yet have an equivalent for Google Takeout’s OPML export. But, they are only three guys. They just started taking money, which is a good sign that they might stay around. Here’s hoping they are able to build a business on this, and that they have the same commitment to openness that Google had.

I plan to try other feed readers, as I can’t be trapped into one product as I was before, but kudos to The Old Reader team for quickly and painlessly rescuing me from the First Great Internet Apocalypse of 2013. I feel like I’m just using Reader, except now I have a warm fuzzy that my beloved service isn’t going to get neglected until it withers away.