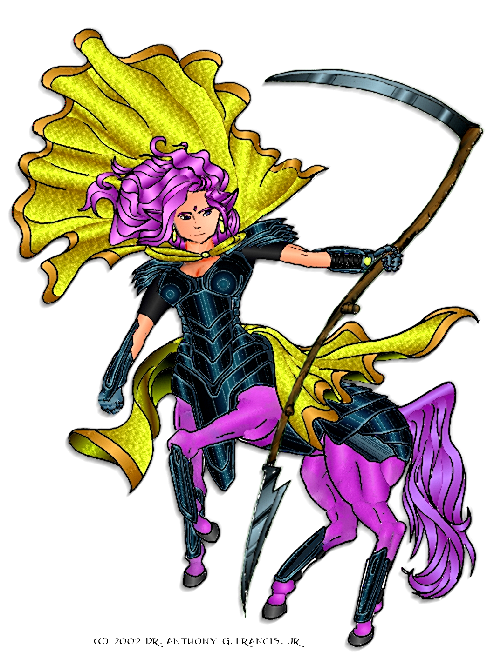 A centaur is a mythical creature with the head and torso of a man joined to the body of a horse. With its origins in Greek mythology, the centaur is one of the most enduring mythological creations, persisting through art and literature in the Middle Ages and enjoying a rebirth with the twentieth century explosion in the genre of fantasy. This page is a collection of information about the centaur in art, literature and imagination - as well as the centaur on the Internet. I update it only rarely, so it is quite behind the times - no mention of Harry Potter, other than this one.

The History of the Myth

The centaur probably began as a horse totem of a tribe of early Greeks in prehistory. The earliest drawings of hippocentaurs (a kind of demon given human form, or kallikantzaroi, in ancient Greek myth) show men wearing fetishes of hindquarters of horses joined to their waists. These hobby-horse fetishes, common (in varying form) to European crop and fertility rituals, only later became depictions of human torsos joined to actual horse bodies. The hypothesis that the centaur represents a terrified tribal reinterpretation of a horse and rider is probably without merit.

The Greek love for the horse led to the ennoblement of the centaur in myth and legend (the only version of the kallikantzaroi to be so honored). The Centaur Chiron was known for his wisdom and healing abilities. Other centaurs did not fare so well in myth: Nessus was killed by Hercules for trying to rape (variously) his wife or a woman under his charge, and other centaurs were renowned for their weakness for drink. The centauromachy - the depiction of one or more of the fights between humans and centaurs in myth - became a popular feature of Greek art. The centaur was also used by some writers to symbolize man's dual nature as an intellectual creature (the human half) which was also an physical animal (the horse half).

In the Medieval period, the centaur fared more poorly, often becoming a demonic image. Nevertheless, the centaur remained a popular character in art, no doubt due to the vast influence of Greek art and literature on Western culture.

The Centaur in Modern Times

Staggeringly out of date. I mean, gopher? Who uses gopher?

Mythology and Other Literature