SO RECENTLY I had a very vivid dream in which my veterinarian said to me “There are some cats you save … and some you make comfortable.” I think the context behind that dream is worth a little unpacking, don’t you? 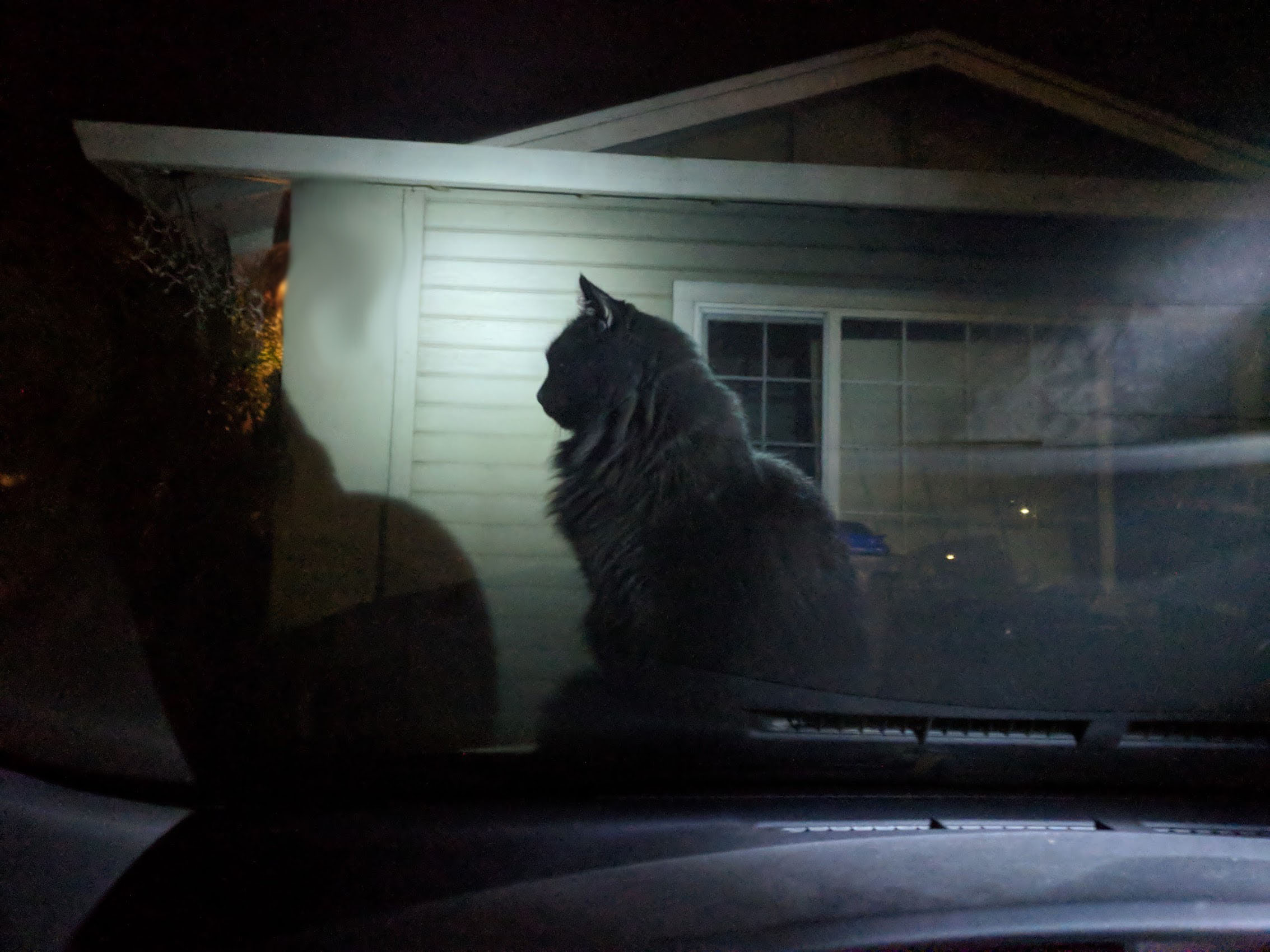 Loki the Loquacious is a cat that we saved. I came home one day to find him yowling and lethargic, sensitive to the touch yet unwilling to move, with a bloated feeling to the touch, and after a brief search online we rushed him to the nearby animal hospital who quickly diagnosed him with a urinary tract blockage, put him on a catheter, and nursed him back to health.

Now, he hates the urinary tract pet food we feed him and the occasional water droppers when he’s not drinking, but unless this outdoor cat gets too adventurous, he’s probably got a long life ahead of him. 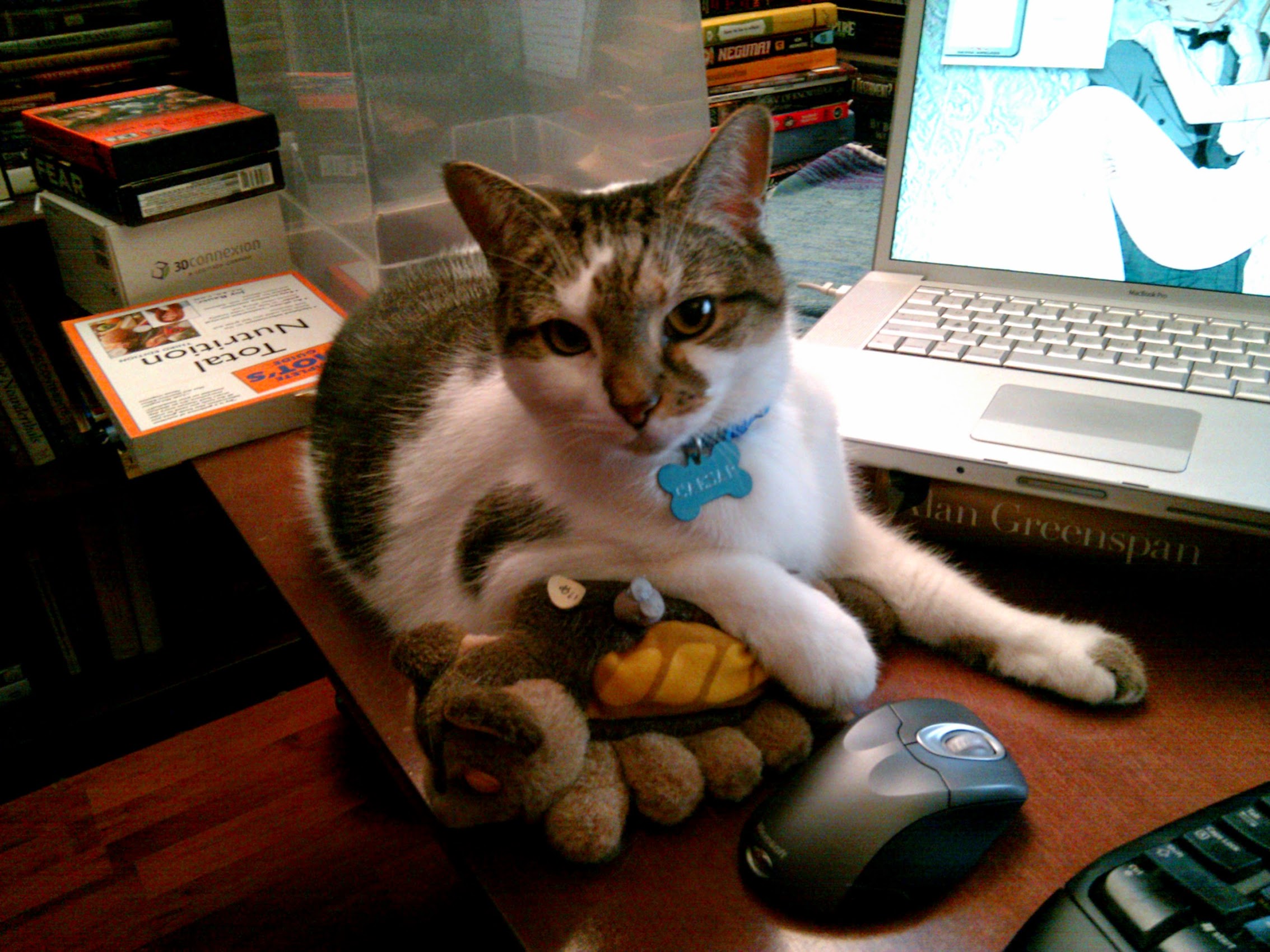 Caesar the Conqueror is a cat that we made comfortable. He’d been made frail by a long battle with a thyroid condition when he decided to start peeing inappropriately indoors, so we had to make him an outdoors cat; but we were able to set up a relatively nice outdoor area for him. But then some nasal obstruction began interfering with his breathing, and he ultimately wheezed himself to death. 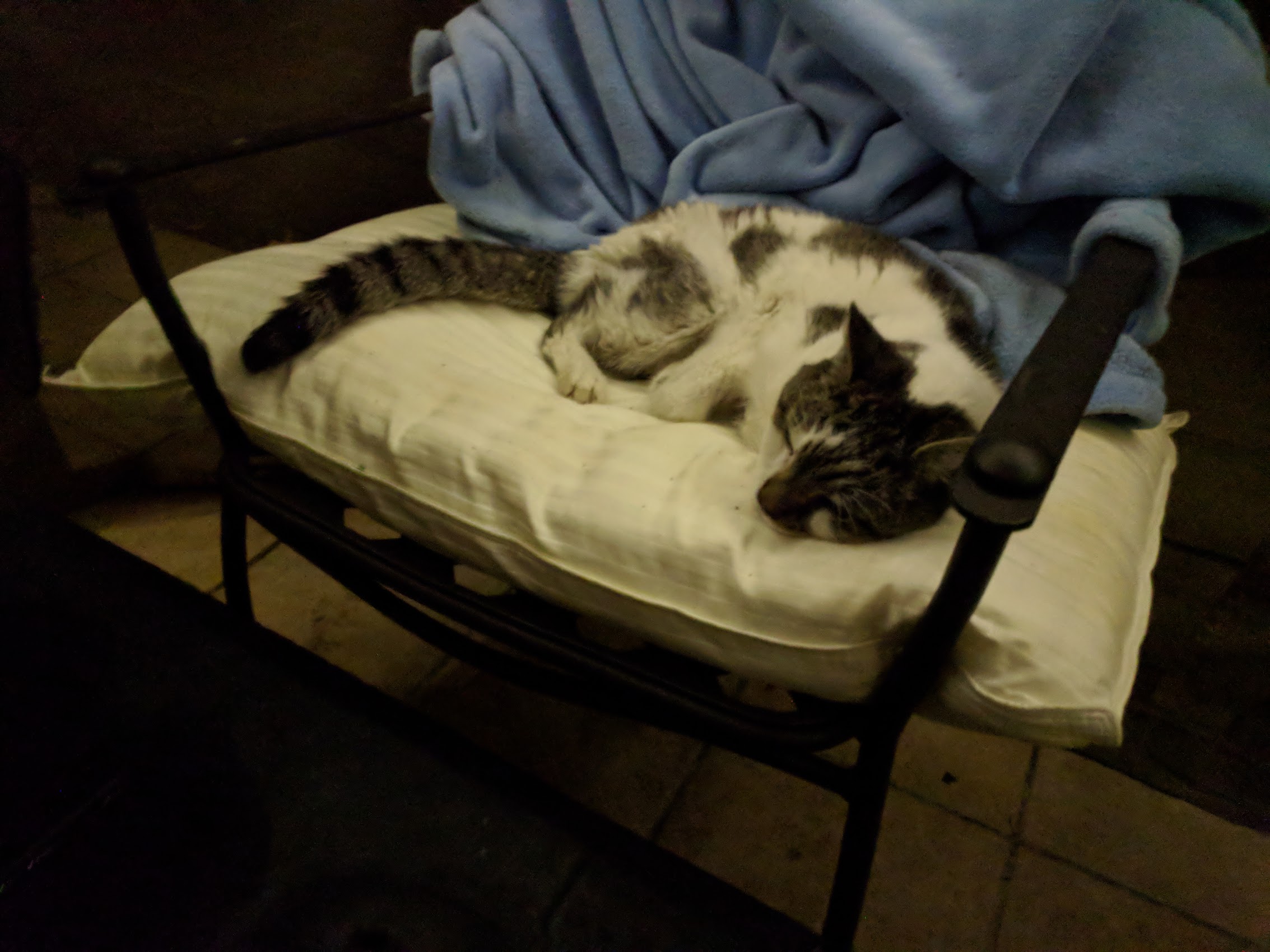 We kept him comfortable, of course, until he took a rapid turn downhill, and then we had him peacefully put to sleep in my arms.

As for Lenora the Cat … the jury is still out. 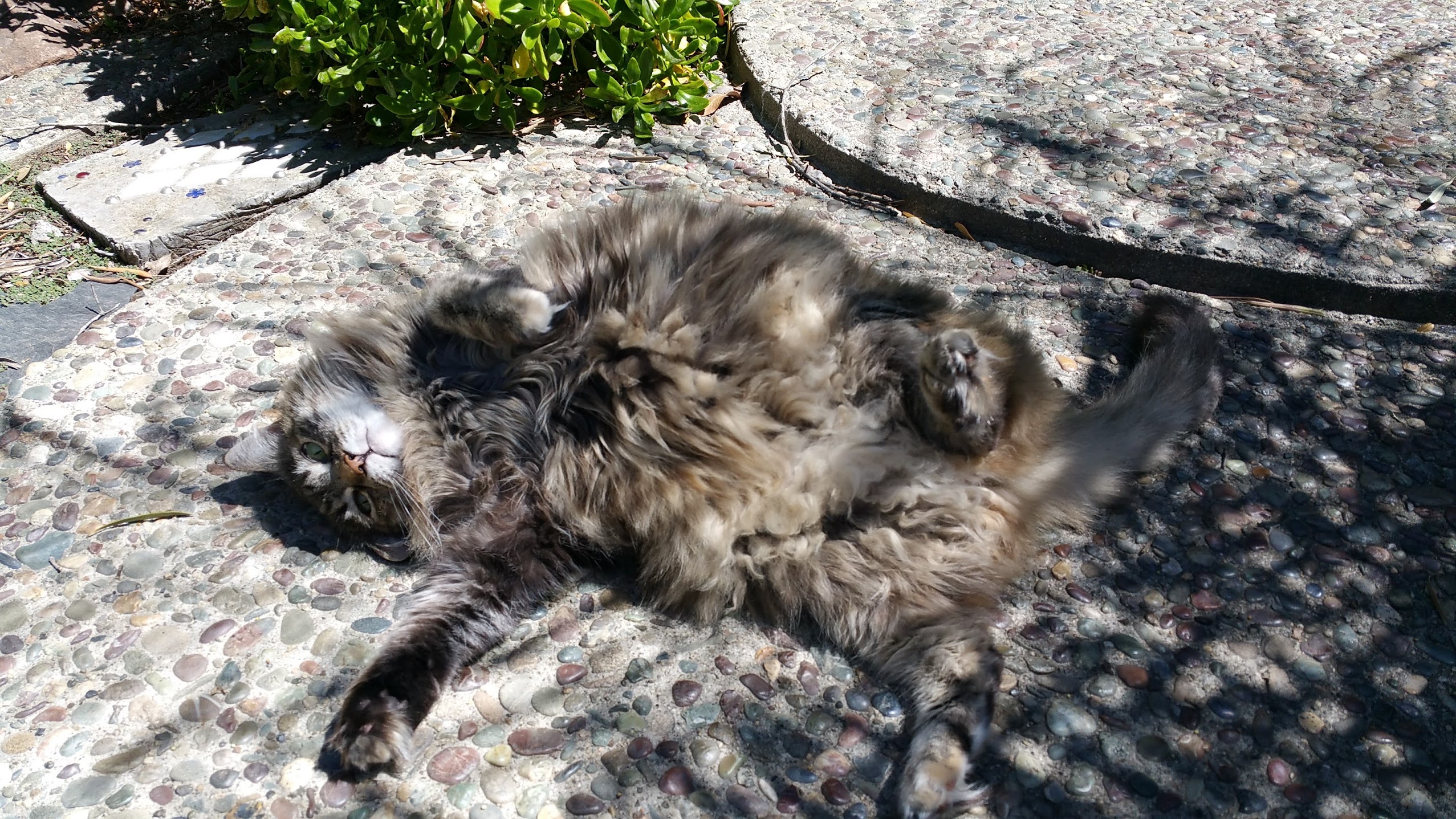 She’s a healthy-looking, happy-looking, active cat, and even though she from time to time got pencil-eraser sized moles, and once even a larger lump on a back leg, they were always benign … until a month ago. Then a new mole appeared, and another, and another, until she had dozens of the tiny, not-itchy, not-bleeding, not-discolored bumps all over her body. We took her to the doctor, who found two more walnut-sized lumps in her abdomen; biopsies revealed these to be mast cell tumors (MCT or mastocytoma). 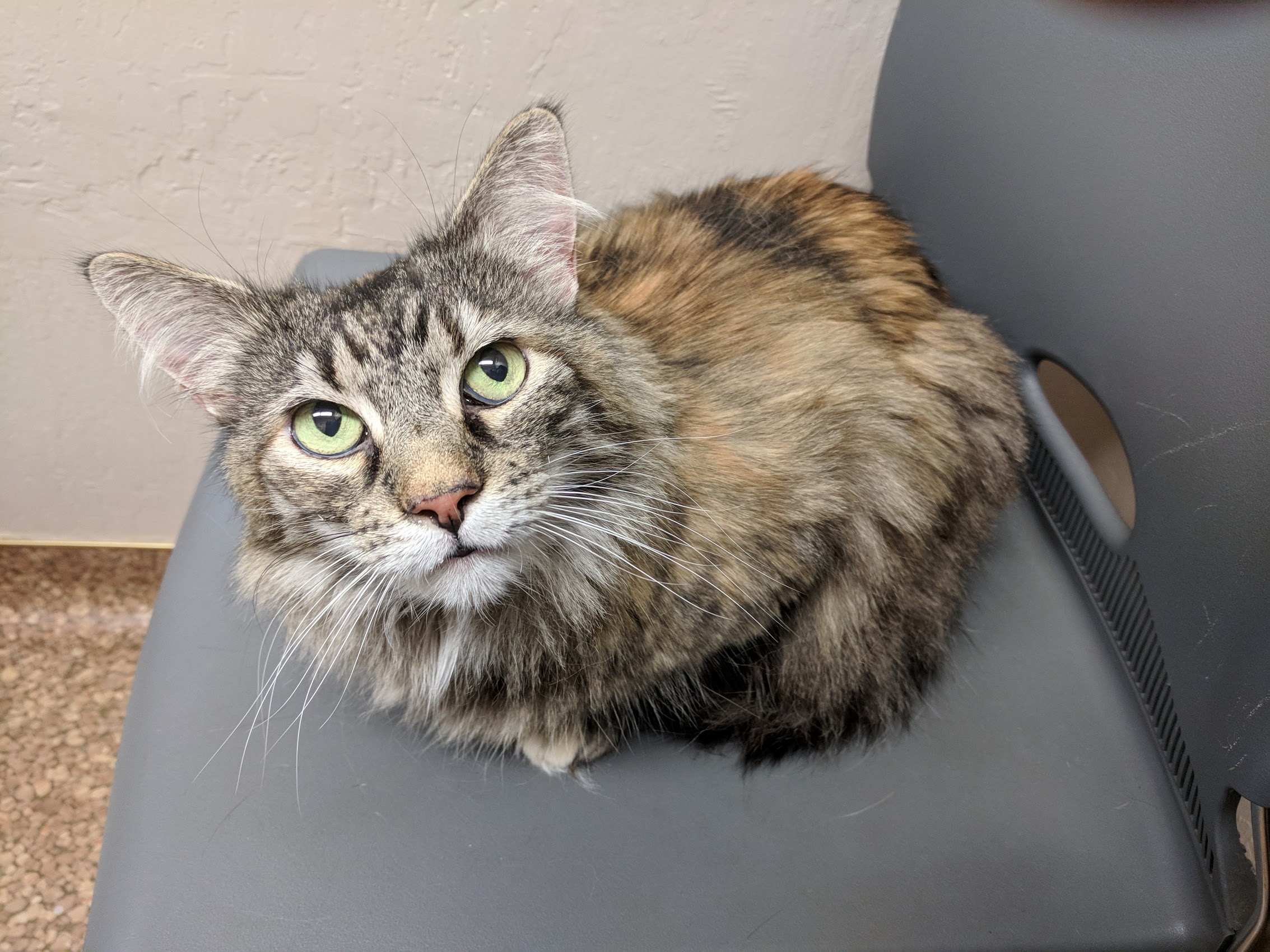 Our doctor’s recommended regimen – a cortisone shot, followed by predisone and possibly other medications – tracks with what I’ve been able to research. Cortisone and similar drugs are recommended, and sometimes even can cure it, especially if it’s on the skin; but prognosis for lumps in the internals are more guarded – and she’s gotten another lump since the biopsy.

So now we’re researching, weighing the options of continuing treatment vs seeing an oncologist now (our vet is of the opinion that we’d have to wait a few weeks for an oncologist to get good readings on bloodwork because of the cortisone shot, but if I was an oncologist I’d want to see that third lump right now). Cats with this condition can last three years with surgery, a year with palliative care … or can die within weeks if it’s serious.

We don’t yet know if Lenora’s a cat we must make comfortable … or that we can save. 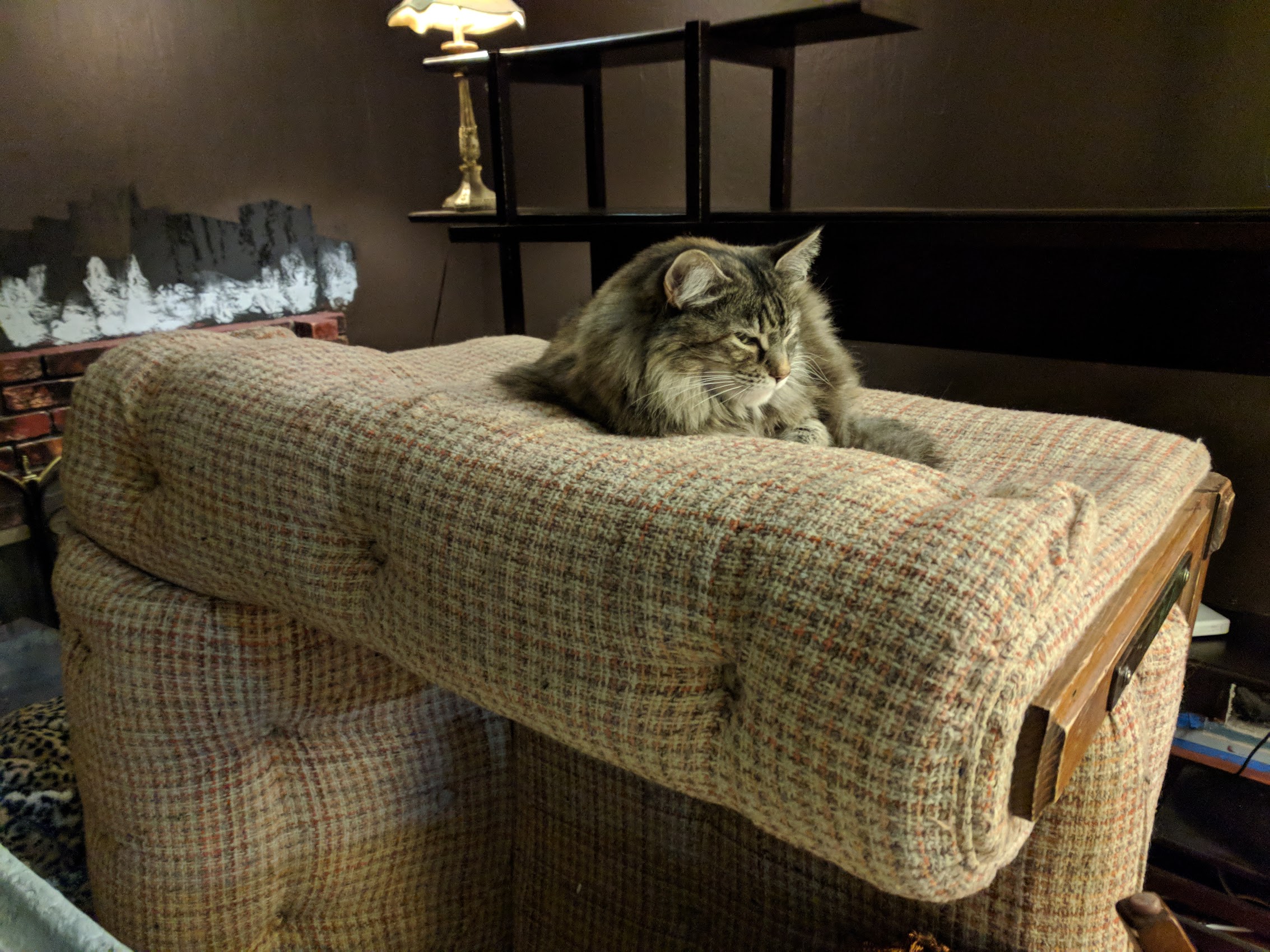