Yaay! Once again, I have completed National Novel Writing Month … this will be my 10th successful Nano. I’ve only been doing it 9 years, but this year, I started tackling Nano more often – in April and August. April was a success, but August I found I wanted to do more editing than writing, so I’ve officially succeed at Nano just 10 times out of the 11. 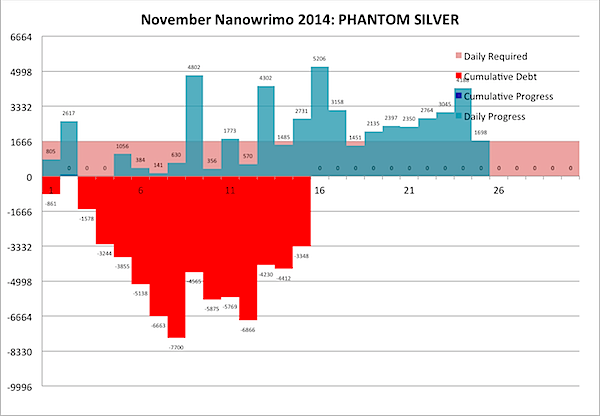 I’ll let the August one slide, as it was really ambitious (and I also really try to reserve the time leading up to October for preparation for 24 Hour Comics Day) but when November rolls around, I get serious. This is the time all of my novels are born, and when I see a month start off with the kind of deficit you see above, I get cracking. 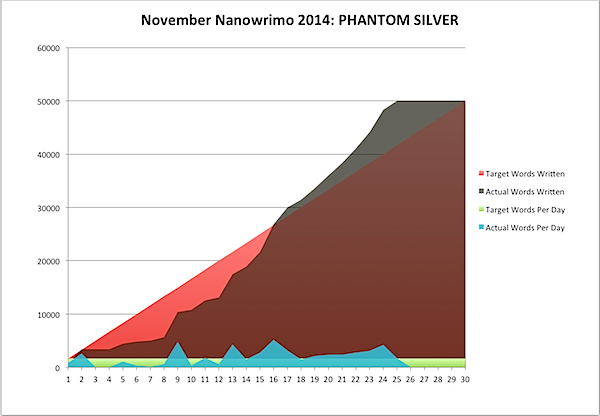 I’m so serious about this, I take the whole week of Thanksgiving off every year just to work on this (something that is easier because my family is a rough plane ride back over Thanksgiving, and I see them every Christmas). But you know what? I want to enjoy my Thanksgiving … so I really poured on the juice near the end. 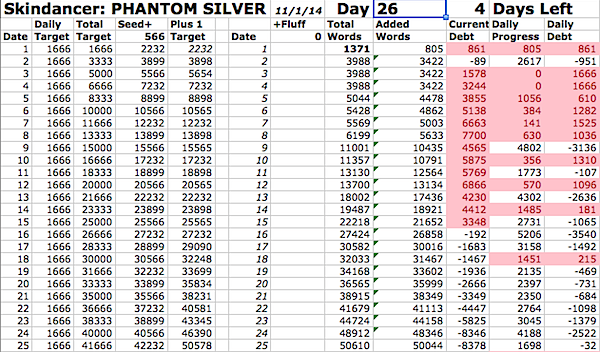 The National Novel Writing Month site has some awesome word tracking tools, but I often turn off the Internet during Nano, and so I have developed my own Excel spreadsheet specifically for this purpose, which shows me, graphically, how much I need to write to get on track. Cells turn from red to white as I successfully get ahead of the game, and so by the end I was pushing 3-4000 words a day, trying to finish early. And I did, yesterday afternoon, at Panera Bread near my house. 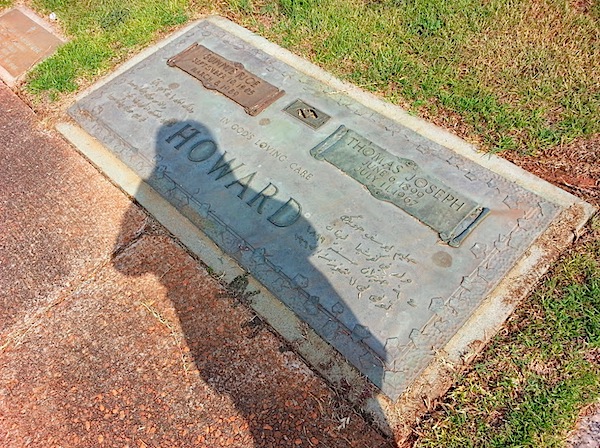 PHANTOM SILVER is one of the oddest books I’ve worked on yet. The plot has taken many strange twists and turns, including some that popped out of a deep harvest of some of the older material in my massive cuttings file. It’s also turning into a deeply personal story, as my exploration of ghosts has led to an exploration of my characters’ ghosts, and, by extension, since my characters are often based on me and my family … I am exploring the ghosts of my own friends and family as well. 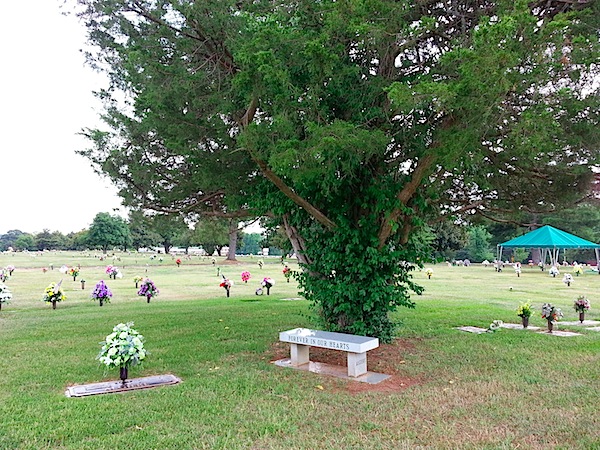 This picture was taken standing quite close to my father’s grave (not visible in the picture) and while my father won’t picture in the story … I’m having fun exploring Dakota Frost’s background, since she came from a (fictional) place in the South that is literally right up the street from where I grew up in real life.

But, as fun as it is … I’m glad to be done with this chunk. Already (since yesterday) I’ve finished a first draft of a short story in the Jeremiah Willstone universe (due at the end of December, for a Clockwork Alchemy special anthology) and I look forward to diving back into the editing of LIQUID FIRE, which is going *very* well. Hopefully you’ll see it soon.

No excerpts on PHANTOM SILVER, though; there are too many horrible spoilers for other books. You’ll have to wait on this one, and I know it will be a while, because SPECTRAL IRON and LIQUID FIRE and HEX CODE must come first; till next time.