Since some have asked ... "excellent anatomic reduction" just means "your bone is set well." ;-)

Actually, what it *really* means is that the doctor was able to match the bone ends together and return the bone to its original anatomical shape:

Now, anatomic reduction is what the doctor achieved while I was on the operating table, even before the plate was screwed in. What the doctor hoped (and got) to see was that the good reduction they achieved in surgery (where all the pieces fit together the way they were originally anatomically aligned) remained in place over the intervening two weeks thanks to the plate-and-screw fixation.

And it did. Yay! No news on when my ACME springloaded metal spike attachment will arrive, though.

A Promising Range of Motion

At two weeks, I went back for my follow-up visit. The cast came off, the staples came out, and after an X-Ray, the doctor pronounced that the bone had achieved "excellent anatomic reduction": 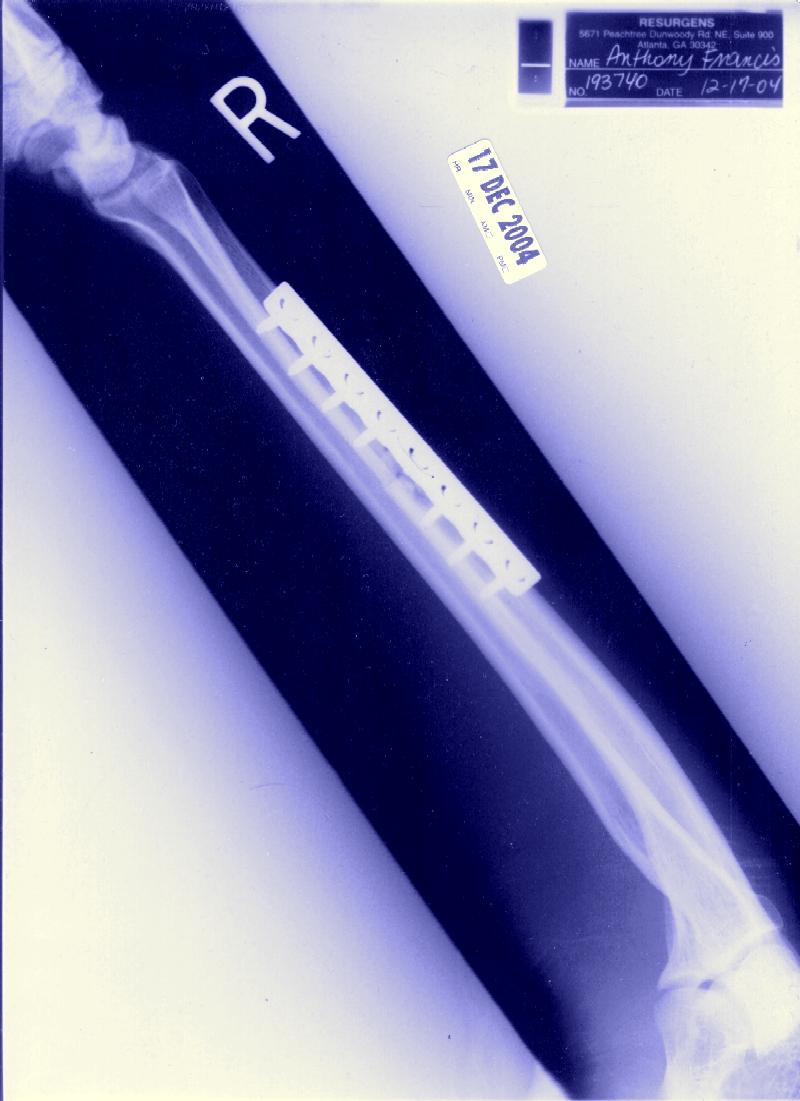 Even before I went in, my friends were all commenting that my fingers seemed to be moving better in the cast/sling thing they had me in, as did the physician's assistant when I arrived; however, once the cast came off the doctor positively cooed over the flex in my fingers and the range of rotation. "Look at that rotation right out of the box. Are your nerves OK? Flex your fingers. Ok. That's great. You'll get full function back in that arm." A promising range of motion indeed.

I'll be carrying this charming little comb of metal around in my arm for a while --- and likely carrying a card to get myself through airport security for a while --- but darn, modern medicine is grand.

Among the many things made difficult by having one's right arm in a sling are a few surprises --- like the inability to apply torque.

I've injured my right wrist before, so I expected it would be difficult to type one handed (especially for a programmer who extensively uses shortcut keys --- try Ctrl-Alt-Shift-O one handed!), or to write one handed (especially bills and checks; they move when you can't hold them down), or to drive one handed (fumble for your right pocket keys, then the ignition, then the seat belt, then the gear shift --- thank God for automatics!) I've had to reduce the number of books I carry to lunch (to my benefit) and obviously heavy lifting is right out.

But it wasn't obvious at all --- perhaps because my previous injury was not so severe --- that I wouldn't be able to *twist* things. When the arm was still
unset for the first three days, even the slightest applied torque was intensely painful. And so I counted it a great victory when, after the bone plate was installed, I was finally able to rip open a pack of Sweet'NLow using something other than my teeth.

However, the problem persists. Opening jars one might expect to be a problem. But being unable to squeeze ice out of ice trays? Unable to fold pants? The problem is worse because I recruit my less deft left hand for everything else ... and thus more frequently drop things, causing my right hand to jerk after whatever I've dropped in an attempt to catch it ... resulting in another painful twinge.

But, it is feeling better --- itchy rather than twingy --- so I'm going to
hope and pray for the best at my doctor's appointment tomorrow!

Thanks to the charming folks over at Resurgens Othopaedics and Saint Joseph's Hospital, who graciously squeezed me into the schedule way early Saturday morning, I now have a prototype bionic arm. Well, an adamantium skeleton, anyway. Ok, so it's just a bone plate. But it is still cool: 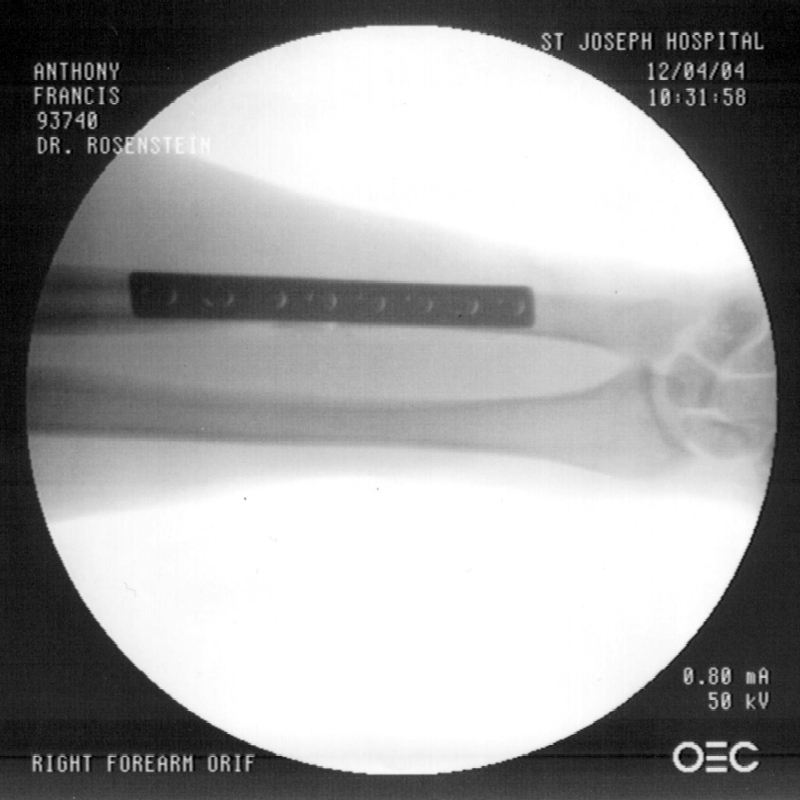 At this juncture they think I have a stong chance to regain more or less full function. w00+! But it is my typing hand, and typing with the other hand is getting tiring, so I'm going to go ice it, elevate it and get back to the full story in a couple of days.

Any pain, swelling or sudden urge to find Sarah Connor?

Seriously, get well soon!
# posted by

I take Taido, a modern martial art focusing on three dimensional movement. One of its most distinctive features is its combination of offense and defense. For example, a key offensive move is is ebigeri, a "shrimp kick" that moves your body out of the line of attack while firing back with a heel kick powered by the change in body axis. A key defense move is half fukuteki, a ducking maneuver which pops you back from an attack but leaves you coiled to deliver an hip-twisting eji zuki punch.

Taido's strategy values this defense-offense synergy over blocks, which waste energy while exposing you to potential injury. Speaking of which...

SO, the thirtieth anniversary of Taido in the US will be celebrated with an international tournament, and so we at Georgia Tech Taido are preparing now. Tuesday night, in jissen (sparring) practice, I got nailed in the forearm by a supa supa smooth, perfectly timed ebi geri fired off by one of our black belts and yes, indeedy, my arm was broken.

Kudos to our senior brown belt Shelly and her husband Greg for running me to Piedmont Hospital and providing moral support, and double kudos to sensei Corey for both his excellent technique and great sportsmanship --- he checked over my forearm right away, knew all the right questions to ask, and let me recuperate while keeping the class running smoothly until Shelly rolled me out the door. (And mongo kudos to my girlfriend Sandi, who stayed the night to help out even though she'd been up 24 hours straight.)

And as for the break? Big lesson: if you hear a crack, it feels loose or it looks out of shape, ice it and go get it looked at ASAP. Most breaks heal in 2 months or so. Mine is a classic nightstick fracture --- treatable in kids by setting the bone but in adults by implanting a metal plate, which has a seven times higher success rate. Surgery is tomorrow, and it will probably be 3-4 months before I can fully resume all activities.

SO, and while it will take at least that long for me to try backflips again, I think this is a good opportunity to focus on my footwork! (When Corey suggested to us at the beginning of class that our hand movement and foot movement are too closely tied and we need to break that in jissen, I don't think he meant us to take that so literally! ;-)

Now, I had some time to think about this while recuperating, and this is what I came up with (based on my mental reconstruction of what happened; but since it went very fast, YMMV). Much of this may have meaning only to a Taido student, but here goes:

Face cover and stomach cover work.
While I said earlier that "this is why we duck rather than block", that's not quite true --- I was doing an untai no ski and pulled my hand down in just the right timing to protect my torso. (As it was I was lucky; he pulled it just a bit because this was a friendly match, so I was in no real danger; in a more serious fight, that same maneuver would have traded me a broken arm for a more serious broken rib and maybe a knockout). Corey said it best at the beginning of class: keep your hands up and make them purposeful.

Keep watching!
Corey nailed me because he saw what I was going to do, saw the opportunity and took it. I too saw what he was doing and had a millisecond chance to abort and fukuteki ... and with more practice I will. As Chris says, keep looking.

Duck rather than block.
The real problem was that I haven't trained myself to duck rather than just move in wth more forward attacks. As Chad has said, we need to focus on Taido: ducking rather than blocking or jamming. With enough live defense to offense practice I would have seen the "opportunity" to fukuteki away from the ebigeri and just done it ... just like Brian E. showed us last night how practice can help you instinctively recognize the opportunity to nengi under a senjo and just do it (which he did pretty effectively to me last night). This kind of defense to offense fluidity is Taido.

Anyway, enough karate theory. This little break may mean some changes over at fanufiku.com ... I'm now trying to recruit guest artists to fill in the gaps --- contact me at centaur at dresan dot com if you are interested.

More news as it happens.