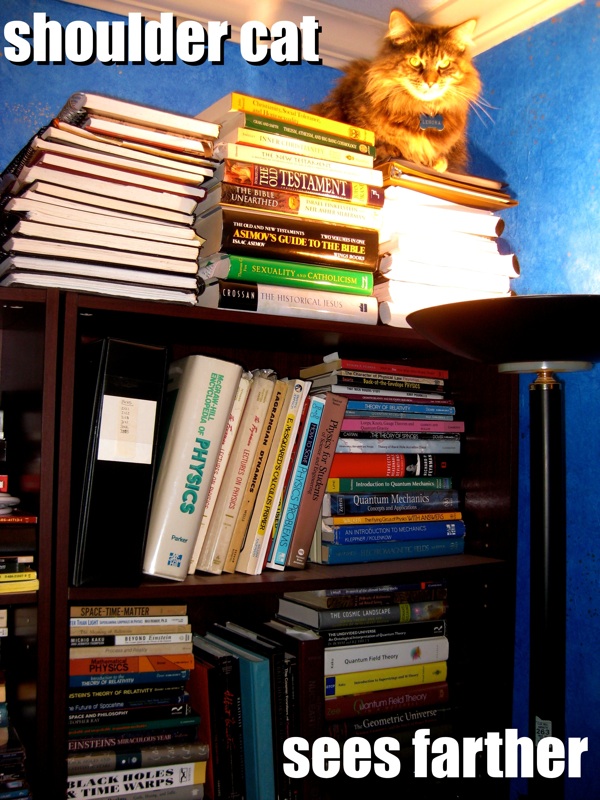 Recently I got nailed with the following note on Facebook or Myspace or some other damn thing:

"Don't take too long to think about it. Fifteen books you've read that will always stick with you. First fifteen you can recall in no more than 15 minutes. Copy the instructions into your own note, and be sure to tag the person who tagged you."

Well, neo-Luddite that I am, I don't want to encourage this whole walled-garden social networking thing, so I'm not going to post a note there until I can effortlessly crosspost with my blog and everywhere else. But I can come up with 15 books:
What did I forget? The Bible, The Chronicles of Narnia by C.S. Lewis, Das Energi by Paul Wilson, The Celestine Prophecies by James Redfield, Jonathan Livingston Seagull by Richard Bach, One Two Three Infinity by George Gamow, The Screwtape Letters by C.S. Lewis, Unfinished Synthesis by Niles Eldredge, Neutron Star by Larry Niven, The Gods Themselves by Isaac Asimov, the collected works of Martin Gardner, Usagi Yojimbo by Stan Sakai, Albedo Anthropomorphics by Steven Galacci, and of course, Van Nostrand's Scientific Encyclopedia, the Volume Library, and before that, back in the dawn of time, the World Book Encyclopedia. Read into that list what you will.

Blogosphere, consider yourselves tagged - your turn.

Cost of a taxi from SFO to MTV: ~$90. Cost of BART+Caltrain: $5.75. Hm ... this green thing has more advantages than just feeling good about "saving the environment". Of course, it takes way the heck longer and many of the trains aren't full, so I need to add public transit to my things to study.

Back before I had a parking permit, I used to take MARTA from Druid Hills to Georgia Tech. It took well over an hour whereas it was a 25 minute car ride, tops. Until our time isn't valuable, or public transit is about as fast as private vehicles, this dog isn't going to hunt.
# posted by