Return of the Donut 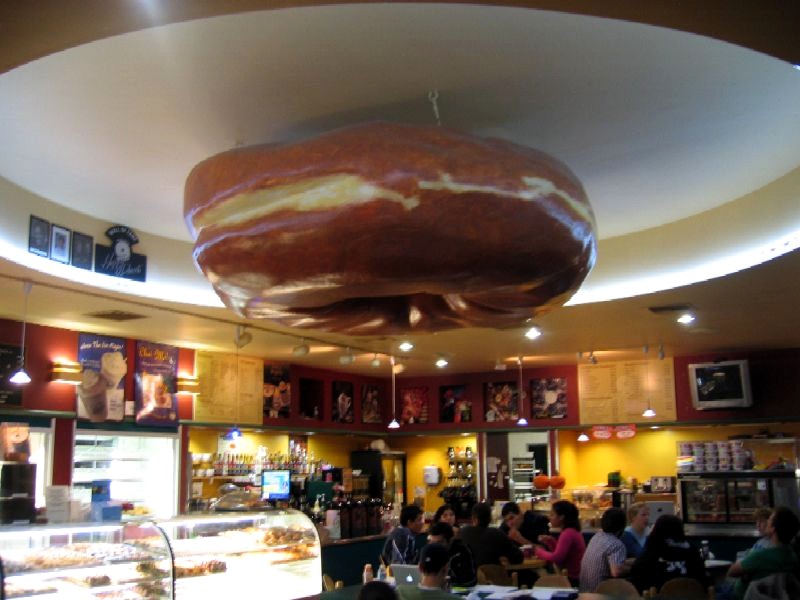 So I'm out in Silicon Valley visiting friends and hitting the old haunts. Upon my arrival I snarfed an In-and-Out Burger, perused books and storyboarded the next half-dozen fanu fiku pages all in the Mercado shopping center, near where my old buddy Z used to live. Then today I prowled the Mountain View crossroads at California and Castro - scouring the vast stacks of the even-larger-than-I-remembered BookBuyers used bookstore ... 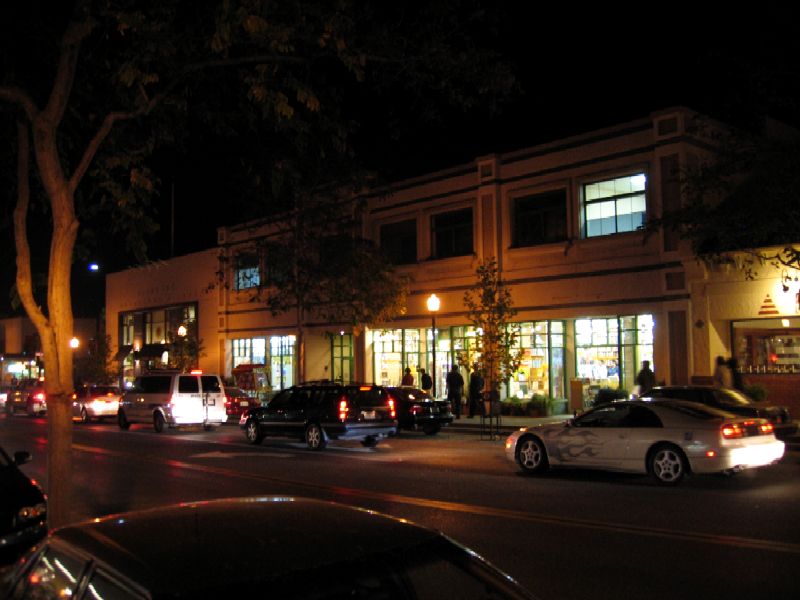 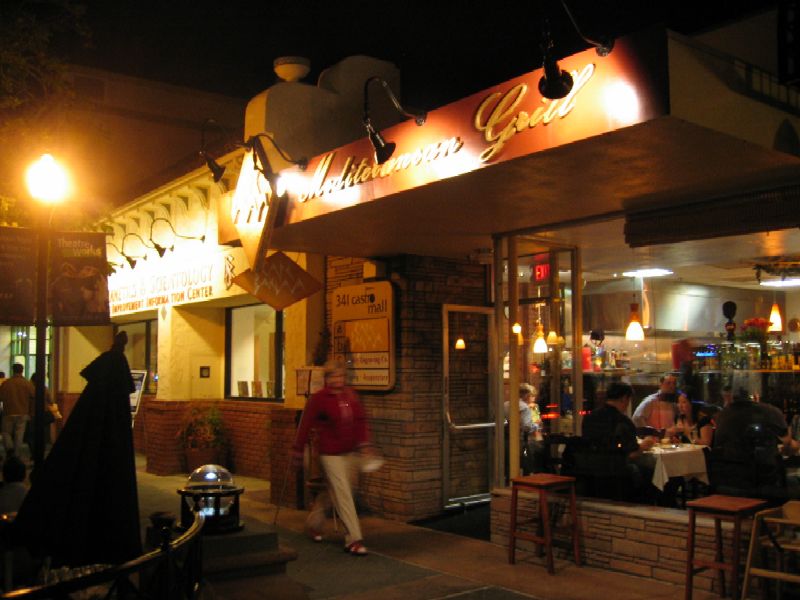 ... finding gits at Global Beads and the East West bookshop ... 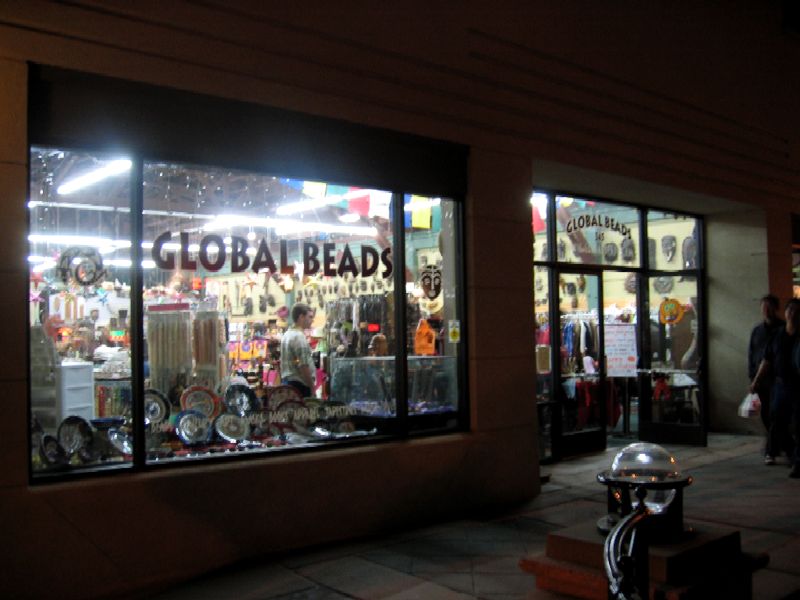 ... and finally parking it in the Books Inc. cafe to get started on drawing next week's page. However, jetlag, a growing sore throat and a menton shortage conspired against me, and I eventually decided to cash it in.

But not before one last trip to Happy Donuts.

The home of "the big donut" is as I remembered it - a vibrant place with a plethora of laptops, numerous lauging posses, and deep conversations of computer implementation. Though, truth be told the same things were going on at a lower volume level at the Books Inc. cafe - but that shuts down at midnight, whereas as of 1am Pacific Time Happy Donuts seems to be just getting started. Even now, an hour later, seven laptops are going, a couple is digging into a vibrant conversation about politics and civilization and culture and personality types, and a posse of digerati are reminiscing over the interesting characters who have dotted their social surfing.

As my Sandi points out, we both run ourselves ragged - not because of the rat race itself, but beyond it: we are both creative people and want to produce, not just consume. But for me, production by itself is difficult; if I go home or back to my hotel after a long day of work all my mentons are drained and I just want to take a nap. But just like taking a walk can rejuvenate me at work, a change of scenery can rejuvenate me at home; and nothing does it like a bookstore run followed by curling up in a cafe for some drawing, writing, or reading.

And it doesn't even have to be a quirky independent bookstore. Consumer culture is not entirely useless: as my friend Gordon points out, a good store captures something important in its Snow Crash three-ring binder: the flower floating in the globe of water on the warm wooden table in front of the local artist's stage at every Border's in America does not quite have the charm of the performance space of your independent bookseller, but if implemented to spec it has a damn good shot at creating a great place for people to think, meet, talk and share . In fact, I find the carefully-designed frappucinos at Barnes and Nobles beat most independent baristas on sheer yumminess, even if the space in which your independent delivers his iced mocha makes up for its slight bitter taste with a whole helping of local charm. Your mileage may vary, of course, but the point remains: what one man can do another man can do, and at least in this case one man can create a great place for me to think.

But even then, after a few hours, my energy seems to run out, and if I head back to the ranch I'll soon find myself in dreamy slumber. Which is a good thing ... unless I have something to do, like trying to get out a page or break my weblogjam. And that's where Happy Donuts comes in - the last best hope for keeping oneself awake until the page is done, or in this case, the essay. Silicon Valley tends to roll up the streets a little earlier than Atlanta, with a few exceptions, but this ends up a good thing, as it drives people far and wide to Happy Dounts for their caffeine-sugar-wireless fix. And Happy Donuts doesn't rest on their laurels: they work it, providing a huge number of donut varieties and other foodstuffs and tables and powerstrips, all for your working/surfing/chatting/dining pleasure.

And it works - so well, in fact, that I feel compelled to visit every time I come to the bay, and am rewarded each time by getting SOMETHING done while I'm here. And because it keeps working, I keep comin. As one lady in the digerati posse said to her friends on their way out, just a few moments ago: "Thanks. This was a good idea. I'll be back tomorrow." 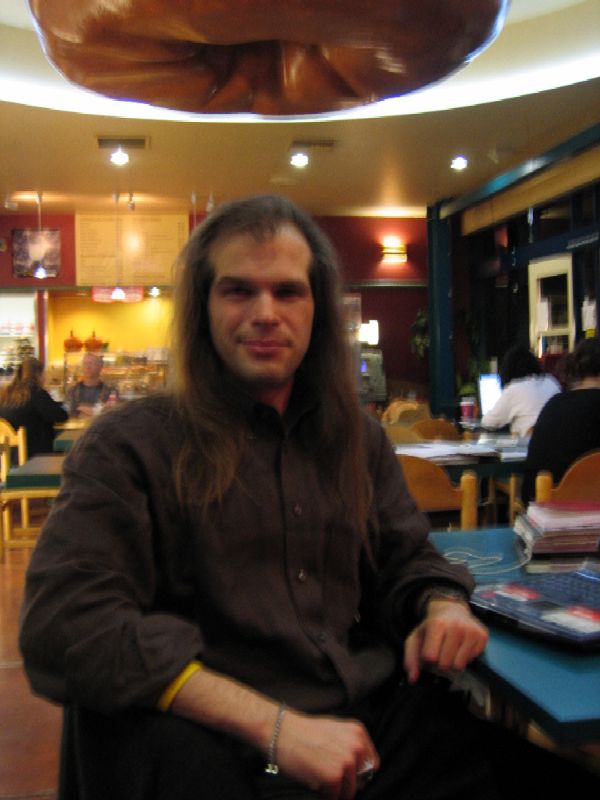 Mmmmm. Happy Donuts does ease the pain.
-the Centaur

Well, Serenity has lost half its take:


Serenity rustled up $5.4 million in its second weekend for a 10-day tally of $18 million. The $39 million space western's 47 percent drop was precipitous but solid for the genre—such similar pictures as The Hitchhiker's Guide to the Galaxy, Sky Captain and the World of Tomorrow and The Chronicles of Riddick each had greater falls. However, they were generating much more business, and, at its current pace, Serenity is aiming for a final haul of around $28 million.

Did none of the (other) browncoats wish to see it more than once?
-Anthony

The Lesson of Serenity Valley: You CAN Stop the Signal

Well, Browncoats, time to admit it: we've lost another battle.

Despite a huge grassroots marketing campaign, in which I and every other rabid fan donned our browncoats and begged, borrowed and cajoled all our friends into the theaters to see Serenity, Joss Whedon's attempt to resurrect his failed TV series Firefly, it nonetheless got off to a dismal start, earning just over ten million dollars in its first weekend of release. Universal Studios, to their credit, claims not to be disappointed: "The fan base turned out ... over $10 million is a lot of business for a niche appeal picture, and I think the ancilliary will be spectacular." But honest fans know better: Serenity failed to change the course of last week's critically panned Flightplan as it led box-office receipts back to the slump after September's hopeful rise.

Now, I don't know the future; it's certainly possible that Serenity could become a sleeper hit, make back its money, and convince Universal Studios to give it its fan-desired and possibly-deserved sequel. But I have to face the facts: Serenity didn't break a record. It didn't break number one. In fact, it didn't even really help the box office, which went into a slump. And all I keep hearing ringing in my ears is something I never heard spoken aloud: a snark from a reviewer of Serenity, mystified by the reception the fans gave the movie:

Suffering through, I mean watching SERENITY is like starting at the 84th episode of a convoluted and silly sci-fi soap opera. Sure, fans of Joss Whedon's cancelled TV show "Firefly," upon which this movie is based, are certain to love it. Our packed audience of rabid fans burst into thunderous applause when the words "Feature Presentation" came on the screen. Various characters from the series got similar but smaller accolades. As a non-fan, it made me appreciate the wisdom of TV executives who aborted the show.

So, time to hang up the Browncoat, review the losses of the war, and rethink things. Clearly, science fiction and fantasy can survive on screen. Star Trek, Doctor Who and the Hitchhiker's Guide to the Galaxy were all resurrected. Despite everything working against it, Babylon 5 survived, spawned a sequel, and several TV movies. Even children's books like Harry Potter made it to the screen, in increasingly successful segments. How, how do they do it? I don't pretend to know. All I do know is that it's possible for an indie filmmaker to graduate from ultra-low-budget fare like Evil Dead and Bad Taste to films like the record-setting Spiderman (Sam Raimi) and the Oscar-winning Lord of the Rings trilogy (Peter Jackson).

And that it's possible for indie filmmaker George Lucas to go on from American Graffiti and THX-1138 to create the beloved classic Star Wars, a saga that will be told and retold a long, long time from now in galaxies far, far away.

Who's your master now, Joss?

-the Centaur
P.S. Remember, while you're falling into that airshaft, that loss of a hand is only temporary: all you need to do is invest in a new sharp black wardrobe and rebuild your lightsaber and you can not only get back in the game, but ultimately win (though your chances of redeeming Lucas are dubious). In the meantime, your friends will be waiting for you on the sanctuary moon, standing in line for your next picture with a Browncoat on over our Wookie suits.