Aptera, Not Yet In the Wild

Aptera is the manufacturer of an innovative new aerodynamic electric car which has appeared in the press recently. Now I've had a chance to see one in real life when on Earth Day they brought a couple of their test models to the parking lot of the Search Engine That Starts With a G: 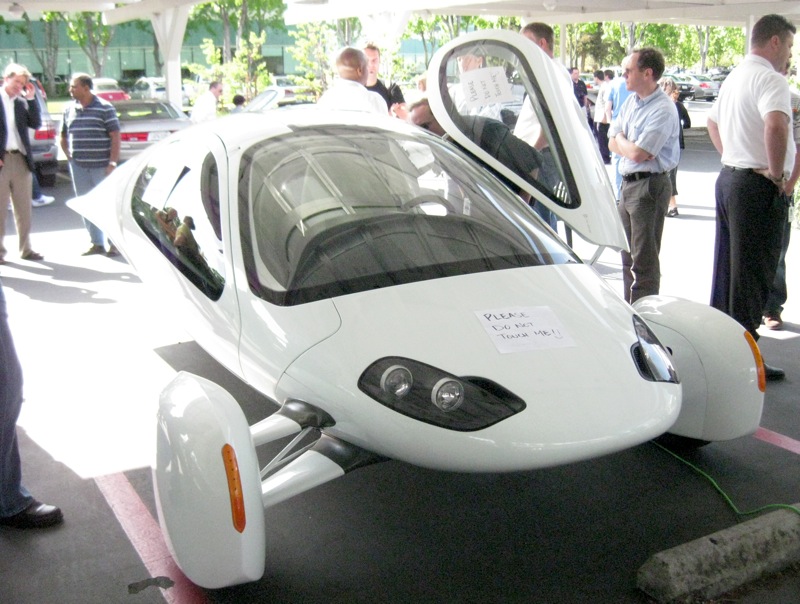 These cars will go on sale in November, starting at $25,000ish for the base electric model, something higher for a gas model, and up to $40,000 for a series gas-electric hybrid that runs entirely on its electric motors until the battery runs out, at which point a generator kicks in.

I wasn't one of the lucky few who got test drives, and the $1M prototype wasn't set up for people to sit in it, but from what I saw of the cockpit it looked comfortable. There wasn't a lot of space in the back, however:

Aptera's car is interesting in that it is a three wheeler. Part of the reason for this is aerodynamics: Aptera started with the most aerodynamic car it could and then has been adjusting it to make it more livable, rather than start with an old style car and bubblifying it. 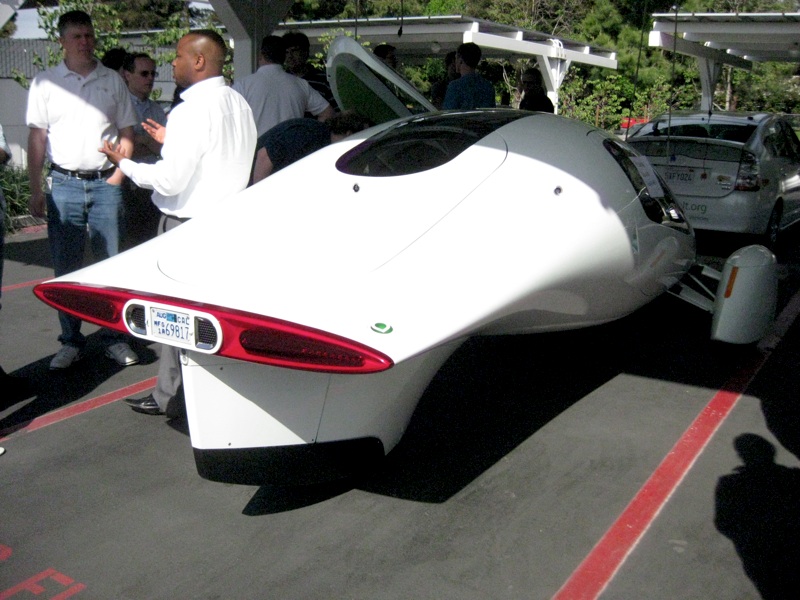 What's fun is watching these cars drive. I saw one slicing past me on the road as I was driving up to the demonstration in my beloved but gas-guzzling Nissan Pathfinder, and it was going so fast it looked like a bat out of hell. But they're almost completely silent:

I'm not sure it's my next car - I plan to test drive a Tesla shortly. But I'm definitely thinking about it, even though it is definitely 1.0 technology that will have a few kinks to it.

The series hybrid is most intriguing to me: if you drive to and from work everyday and charge up at work or at night, the gas motor will never have to kick in. If you want to take a road trip, however, you don't have to worry about running out of power and looking for a place to charge: the generator kicks in and you can drive it like a normal car - that is, just like a super efficient normal car that gets an equivalent of a kajillion miles per gallon.

Labels: Electric Cars, Your Money Is Your Voice

Like the Lime color interior, different. Looks like it's much closer to a production car...hope to see them here in the Midwest soon.
# posted by

Not enough hours in the day, redux... I can't read what I want right now Podmena Traffica Test? Twitter? What's that? -o-\_== @ warp factor 100 Why I Use Transparent Terminal Windows Blog Labels at the Library: The Not-So-Dewey Decim... Pound Cake Reloaded How Wide Should Your Website Be? The Great Litany at Maundy Thursday Vigil