The Sexiest ... Brain on Earth?

From Coilhouse's shoutout Stephen Hawking - "It matters if you just don't give up":

Hey, guess who else was born on Jan 8th? World-renowned theoretical physicist, Stephen Hawking. He turns 68 today. Here’s a small assortment of reverent (and not so reverent) clips and quotes concerning a brilliant and resilient man whose mind is arguably Teh Sexiest human organ on this entire planet:

One of my favorite of the clips in that article follows:

"I hope I would not use the [robotic boxing glove the Simpsons gave me]. But sometimes I'm sorely tempted."

Filed under "Thank You, Carl Sagan" because, well, he's practically the next best thing to Carl we have now.
-the Centaur

Also candidates for next best thing to Carl: Steven Pinker; Richard Dawkins. Both are esteemed scientists who write well for the general public. Dawkins also has the resemblance to Carl with his skepticism.
# posted by

"Thank you, Carl Sagan" is an in-joke I and my friends use which requires a bit of explanation. I've been a member, on and off, of the Planetary Society since ... oh, heck, I don't know, since I lived in Greenville, South Carolina ... which makes it at least 25 years, a credible guess since the Planetary Society was founded by Carl Sagan in 1980.

Back in the 80's, I was first coming into my own as a space enthusiast - getting a subscription to Scientific American, joining the Science Fiction Book Club, and of course joining the Planetary Society.

A few years after I joined, I opened my mailbox in Greenville and found a renewal letter for the Planetary Society. That was great - I had planned to renew - but when I pulled out the envelope and prepared to write my check, I found the following (roughly reconstructed from memory):

I was flabbergasted. This was my first barely-adult encounter with marketing speak and I couldn't imagine the hubris of someone asking me for money writing the response letter in such a way that it looked like I was thanking them.

Even though I was young and naive, on some level I knew Carl Sagan hadn't written that letter, and even if he had seen it he would have approved it without a second thought (I mean, come on, the Society IS providing a valuable service). But it was funny enough at the time to show it to all of my friends, most of whom were also big fans of Cosmos.

So every time Carl Sagan's name was mentioned, it was immediately followed by a chorus of: "Thank You, Carl Sagan!" I still hear those words every time I hear his name ... but the meaning has changed:

Cosmos. Contact. Intelligent Life In the Universe (with Shklovskii). The Pioneer Plaque. The Pale Blue Dot. The Planetary Society itself. And A Still More Glorious Dawn Awaits (with Stephen Hawking and Colorpulse).

Carl Sagan ruminates on life on Earth, how, as seen by a far-off camera on a spacecraft, a pale blue dot houses everyone anyone ever has known in the course of human history.

From his speech on the Pale Blue Dot:

It has been said that astronomy is a humbling and character-building experience. There is perhaps no better demonstration of the folly of human conceits than this distant image of our tiny world. To me, it underscores our responsibility to deal more kindly with one another, and to preserve and cherish the pale blue dot, the only home we've ever known.

Thanks, Carl.
-the Centaur 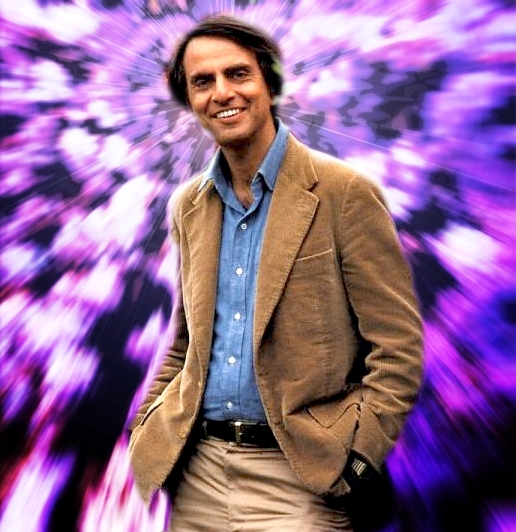 Thank you for your warm words for Carl and for John Boswell's music/video.

Anonymous : 6:59 AM
I completely agree, this is a great song with great words.
# posted by

So I'm working on a scientific paper that is trying to report the meagre results I got on a project that was canceled halfway through. While doing so I came across the following articles by Norvig, which hopefully will be useful in attacking my own assumptions and make the paper stronger:

When an experimental study states "The group with treatment X had significantly less disease (p = 1%)", many people interpret this statement as being equivalent to "there is a 99% chance that treatment X prevents disease." This essay explains why these statements are not equivalent. For such an experiment, all of the following are possible:

There is no way to know for sure which possibility holds, but there are warning signs that can dilute the credibility of an experiment.

Evaluating Extraordinary Claims: Mind Over Matter? Or Mind Over Mind?
A relative of mine recently went in for minor surgery and sent out an email that asked for supportive thoughts during the operation and thoughtfully noted that since the operation was early in the morning when I might be sleeping, that

It doesn't matter, according to Larry Dossey, M.D. in Healing Words, whether you remember to do it at the appropriate time or do it early or later. He says the action of mentally projected thought or prayer is "non-local," i.e. not dependent on distance or time, citing some 30+ experiments on human and non-human targets (including yeast and even atoms), in which recorded results showed changes from average or random to beyond-average or patterned even when the designated thought group acted after the experiment was over.
I was perplexed. On the one hand, if there really was good evidence of mind-over-matter (and operating backwards in time, no less) you'd think it would be the kind of thing that would make the news, and I would have heard about it. On the other hand, if there is no such evidence, why would seemingly sensible people like Larry Dossey, M.D. believe there was? I had a vague idea that there were some studies showing an effect of prayer and some showing no effect; I thought it would be interesting to research the field. I was concurrently working on an essay on experiment design, and this could serve as a good set of examples.

The only thing that I quibble with is the term "extraordinary" in the title of the second article. In my experience, "extraordinary" is a word people use to signal that something has challenged one of their beliefs and they're going to run it over the coals, which Norvig does with the efficacy of intercessory prayer in his article (in a very balanced and fair way I think). However, part of the point of Norvig's very evenhanded essay is that these kinds of problems can happen to you on things that you do believe:

After reading Tavris and Aronson's book Mistakes Were Made (but not by me), I understand how. Dossey has staked out a position in support of efficacious prayer and mind-over-matter, and has invested a lot of his time and energy in that position. He has gotten to the point where any challenge to his position would bring cognitive dissonance: if his position is wrong, then he is not a smart and wise person; he believes he is smart and wise; therefore his position must be correct and any evidence against it must be ignored. This pattern of self-justification (and self-deception), Tavris and Aronson point out, is common in politics and policy (as well as private life), and it looks like Dossey has a bad case. Ironically, Dossey is able to recognize this condition in other people -- he has a powerful essay that criticizes George W. Bush for saying "We do not torture" when confronted with overwhelming evidence that in fact Bush's policy is to torture. I applaud this essay, and I agree that Bush has slipped into self-deception to justify himself and ward off cognitive dissonance. Just like Dossey. Dossey may have a keen mind, but his mind has turned against itself, not allowing him to see what he doesn't want to see. This is a case of mind over mind, not mind over matter.

So, at least as working scientists are concerned, I would suggest Norvig's second essay should be retitled "Evaluating Claims."

Or put another way, with all due respect to Carl Sagan, I think "extraordinary claims require extraordinary evidence" is a terrible way to think for a scientist: it prompts you to go around challenging all the things you disagree with. In contrast, I think claims require evidence, and for a scientist you must start at home with the things you're most convinced of, because you're least likely to see your own claims as extraordinary.

This is the most true, of course, for papers you're trying to get published. Time to review my results and conclusions sections...

The Dragon Writers It's finally happened... Your AI Just Wants To Have Fun Anonymous Commenting Disabled Screenshots Cannot Do It Justice GDC 2010 Overview Playing Hooky from GDC 2010 FROST MOON IS ON AMAZON Reading from Liquid Fire on the Radio The Last Hurrahs of Blogger FTP and Earthlink