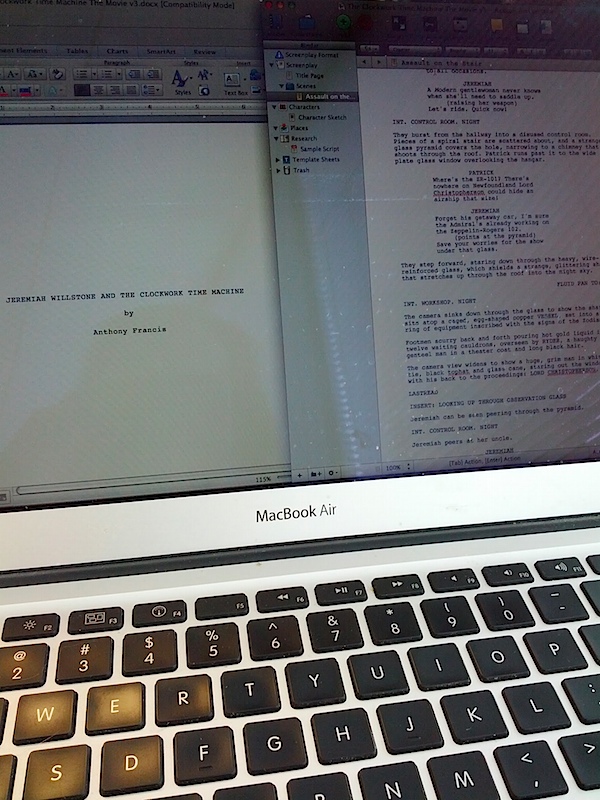 I’m so busy I can’t see straight, so that must mean it’s time to take on another project. I’m doing Script Frenzy this month, a challenge to write 100 pages of a script in 30 days, much like National Novel Writing Month, only for film.

A mammoth complex looms in the night, an airship hangar made of glass attached to a hulking Victorian palace.

Lightning reflects off the glass of the hangar — then flashes of light appear inside the windows of the palace.

More flashes illuminate a long, narrow Victorian staircase with wainscoting and elaborate rails. A figure hurls herself backwards down the stairs, firing electric pistols from both hands as she bumps down the steps on her rear, sliding on her tailcoat.

JEREMIAH slams into the base of the stair, gritting her teeth, keeping both guns trained back the way she came. She wears a long tailcoat, an black corset vest filigreed with gold wire, and a pair of airman’s goggles on her forehead.

At the top of the stairs, crackling green foxfire ripples over the metal bands of the stout wooden door. Holes are blasted in it, and light shifts behind them, but JEREMIAH has no clear shot.

She sees sparks coming from her left gun, and tosses it aside with a curse. She glances at her right gun, seeing the indicator bead hover between three and four notches. A creak upstairs refocuses her attention. Jeremiah murmurs to herself as she focuses on the holes in the door.

Very well, sir, show yourself. Three shots? I’ll get you in one.

Here I mumble “J Michael Straczynski’s the Complete Book of Scriptwriting,” “The Empire Strikes Back Fascimile Script,” “other writing resources I’m too tired to mention”. What? I’m only 9 pages in when I should be around 33. Back to work!