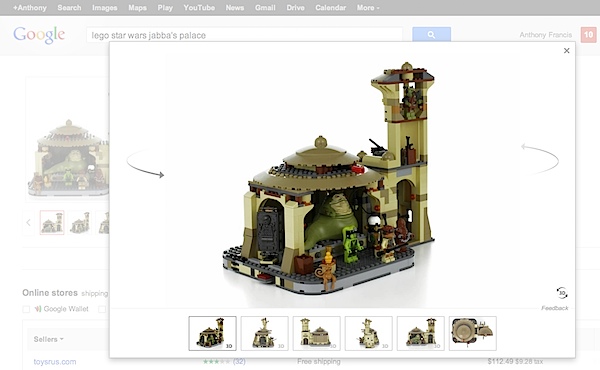 At long last, the project I’ve been working on at the Search Engine That Starts With A G is live. The Google Shopping 3D experience has been launched to the world. From the blogpost:

Explore products in 360-degree detail on Google Shopping Having trouble imagining what a toy actually looks like from the online picture? Now, when searching for a subset of toys on Google Shopping, you can see 360-degree photos of the products. These interactive images bring the in-store feeling of holding and touching a product to your online browsing. Look for the “3D” swivel icon on the product image to see a toy in 360-degree view, on HTML5 enabled browsers. We’ve also put together a Holiday Toy Collection featuring this enhanced imagery—explore the collection on this site. 360-degree imagery is coming for other types of products soon.

Depending on how you count, we’ve been working on this project for six months, a year, a year and a half, or two years. We’ve been in launch crunch proper for six months or so, but planning for the launch began a year ago after the launch of the Galaxy Nexus in glorious 3D WebGL (and yes, it did take us the whole year to get this far, and it was really tight down near the end).

The technology demonstrations that led to that launch and made this launch possible began six months before that, and the actual team that was working on them started just over two years ago – and, honestly, it feels like we’ve been in crunches and sprints for the entire time. Christmas 2012 seemed both far away and far too soon a year ago. It was barely possible.

But we made it.

I don’t share much about the innards of The Search Engine That Starts With A G, especially on a project like this, so I’m going to draw to a close with this thought: I work on a wonderful team filled with fantastic people, geniuses and innovators and hard workers all, and each and every one of them were really critical to making this possible (and I mean that. We had NO slack).

I’d be proud to go into [software] battle with you wonderful guys and gals, any time, any where.

Postscript: You know, I said “geniuses and innovators and hard workers all” but it occurred to me afterward that most of what these geniuses achieved is not at all obvious. The greatest things we did in this project are completely invisible; you would only notice them if we had failed. Despite seeming to be very simple – a few links, a 3D icon, a rotating swivel – this project actually was the most technically rigorous one I’ve ever worked on, including both my PhD and the search engine startup I worked on. So when I said these guys are geniuses, I really mean that – they delivered perfection so great it becomes almost invisible.