My Presence at San Diego Comic-Con 2014 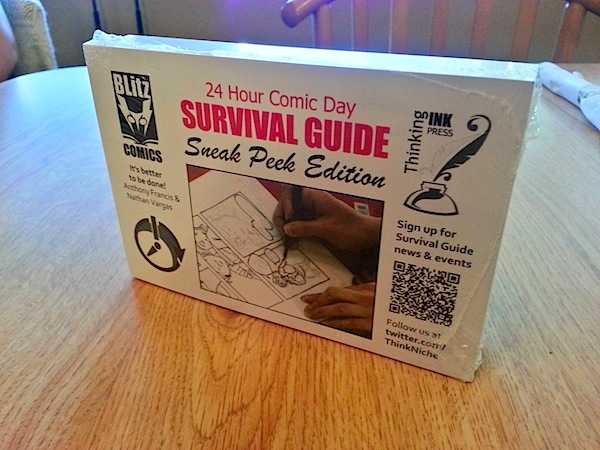 The submarine surfaces, oh so briefly. So, between work, writing and life, things have been stacked up on me so much that not only do I have several half-finished blog posts begging me to finish them and put them up, but also I now find myself already a day into San Diego Comic-Con – and just now blogging about my presence at San Diego Comic-Con.

This year is the tenth anniversary of 24-Hour Comics Day, a challenge to create a 24 page comic in 24 hours, a challenge which me and my buddy Nathan Vargas have tackled a dozen times between the two of us (him seven, me five). It’s a difficult challenge, and we failed the first few times, so we collected our advice on how to succeed in the 24 Hour Comic Day Survival Guide.

Nathan worked with ComicsPRO to create a panel celebrating the 10th anniversary of the event, and will be on the panel along with the creator of the annual event Nat Gertler and several other creators. But what’s special is that we were already planning to update our Survival Guide for this year’s 24HCD in October – and were able to put together a Preview Edition of the Guide.

Thanks to our friends at Thinking Ink Press, we have expanded our original 8-page guide into a 76 page booklet, with over a dozen chapters of tips and advice and interactive exercises. We’ll be giving away signed copies of the Preview Edition of the Guide at the panel celebrating 24-Hour Comics Day, and also giving them away at various events or on the show floor.

The panel is at 5:15 on Friday at Room 18 at San Diego Comic-Con, and Nathan will be appearing with Nate Gertler, Chris Brady, Jimmy Purcell, and Marco Devanzo (with me in the audience). While Nat Gertler created the annual event, the actual 24-Hour Comic challenge was created by Scott McCloud, who will be appearing himself at Comic-Con, and whom I hope to meet.

Regardless, the official 24-Hour Comics Day is held the first week in October every year – this year, October 4. Nathan and I will be appearing at the Alternative Press Expo (APE) on the same weekend, hopefully with some 24HCD themed events, but will take the challenge at Mission Comics and Art in San Francisco which this year is holding 24HCD one week early.

So: that’s what’s going on. As many of you know, I have two novels sitting at the publisher – LIQUID FIRE and JEREMIAH WILLSTONE AND THE CLOCKWORK TIME MACHINE – but Debra Dixon is still reviewing them, so I’m hacking away at Dakota Frost Book 4, SPECTRAL IRON, and blissing out on comics while I wait for the edits to land.