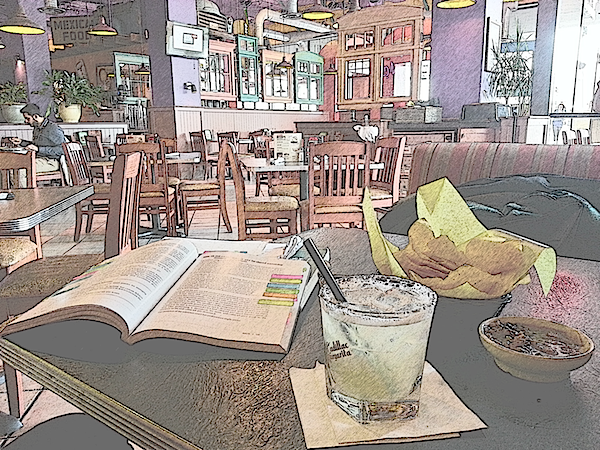 One of the roles conferences fulfill in my life is a chance to recharge. I’m driven to pursue writing, art, comics, software, entrepreneurship, publishing, movies – but I was raised to be responsible, so I have an equally demanding day job that pays the bills for all these activities until such time that they can pay for themselves.

Sometimes I describe this as having four jobs – my employment (search engines and robots), writing (primarily the Dakota Frost and Jeremiah Willstone series), comics (mostly related to 24 Hour Comic Day through Blitz Comics), and publishing (Thinking Ink Press, a new niche publisher trying to get awesome things into your hands).

Having four jobs means that you sometimes want to take a break.

That’s really difficult if you don’t have an excuse. There are literally hundreds of items on my to-do list that I could work on right now, all day and all night. If I finish one, a dozen more are clamoring for my attention – and that’s not counting the time I want to spend with my wife, friends, and cats, or the time I need to spend on exercise, bills and laundry.

But a few oases exist.

Layovers in airports are one of those: I deliberately arrange for long layovers, because between plane flights you have nothing else to do other than grab a bite and a drink in an airport restaurant, chill out, and read something. True, I often work on writing during layovers, but it’s big-picture stuff, researchy, looking at the picture on a scale larger than I normally do.

Conferences are even better. Whether it’s GDC, AAAI, Dragon Con, Comic Con or Clockwork Alchemy, conferences are filled with new information, interesting books, even more interesting people, which spark my imagination – right at the time that I’m in an enforced multi-day or even week-long break from my schedule.

For a long time, conferences have been a great time to pull out the laptop and/or notebook to write or sketch. The idea for the Jeremiah Willstone series started after I saw some great steampunk costumes at Dragon Con; I sold the Dakota Frost series after Nancy Knight saw me writing at Dragon Con and pointed me to my editor Debra Dixon at Bell Bridge Books.

More recently, I’ve been adding to this the power of ruts. This is something that I need to expand at greater length, but suffice it to say I used to think I simply had to do something different every day, every week, every month. I used to keep lists of restaurants and tried to make sure that I never went to the same one two days in a row, trying new ones periodically.

But then I noticed that I really enjoyed certain things, but didn’t always fully take advantage of them because of this strategy – great places to eat, cool coffee houses, and nice bookstores that I simply didn’t visit often enough. Often, on top of this strategy, my schedule would change, making it hard to visit them – or worse, they’d go out of business, and those opportunities were lost.

So I’ve started cultivating habits – ruts – to do the things that I like. Not too frequently – you don’t want to burn out on them – but if you do the same thing all the time, then you can be free to miss it any time. Even better, if you find a great thing that’s efficient – like a place to eat near work, with a late night coffee house conducive to writing – take advantage of it regularly.

Because one day it may be gone.

At conferences, I employ this strategy with a series of life hacks – go to breakfast before the conference to up your energy level and organize your thoughts, pick the best breakfast place for writing and reading, break for lunch at 11:30 to 11:45 to miss the lunch rush, and also find the best place where there are no lines and concentration can be had.

At GDC, I’ve found a good set of hotels near the conference, a few good breakfast joints on the walk to the Moscone Center and a few places to eat slightly off the beaten path that are pretty empty just before noon – and I hit these places again and again, pulling out my notebook and tackling problems which are really big picture for me, mostly related to future game projects.

At Dragon Con I do similar things – hitting the Flying Biscuit breakfast joint that appears in Dakota Frost, getting coffee at the Starbucks in the Georgia Tech Bookstore, hitting the Willy’s lunch counter that inspired the Jeremiah Willstone story “Steampunk Fairy Chick,” et cetera, et cetera; and at each one I pull out the notebook and work on big picture story ideas.

These places are real oases for me: a break within a break, a special place set aside for thinking within a special time already set aside for recharging. Because of how human memory works, sometimes I can even pull out a notebook (or an older notebook), find my place from last year, and pick up where I left off, plotting my future in an oasis of creative contentment.