I stand corrected. I thought I’d succeeded at Nanowrimo eleven times, and technically that’s true. But it turns out that I’ve taken on a Nano challenge thirteen times and succeeded at it twelve – because of Script Frenzy. 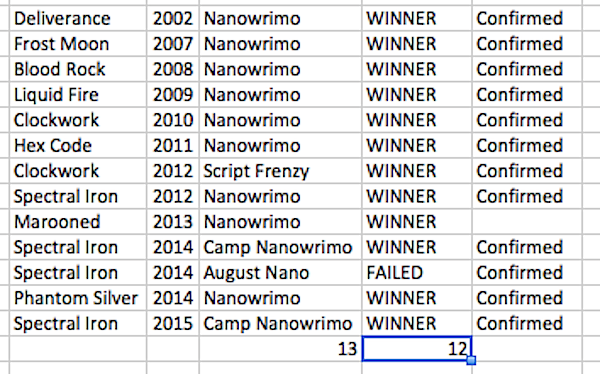 Script Frenzy was the event that predated Camp Nanowrimo in April – a challenge to write 100 pages of a script in the month of April. I took on Script Frenzy once, in 2012 – I think that may have been the last year that it ran. Since 2014, I’ve been doing Camp Nanowrimo, and won at that twice. So every time I’ve taken on an official Nano challenge, I succeeded.

That’s a little over a half a million words. Wow.

But I took on Nano one more time, on my own – in August of 2014. Perhaps because I lacked the support of the community – this was an “unofficial” Nano on my part – or perhaps because the book needed more editing than writing, I only got 10,000 words into the challenge that month. But I’m still very happy how it turned out.

So, to confirm: viiictory, twelve times.