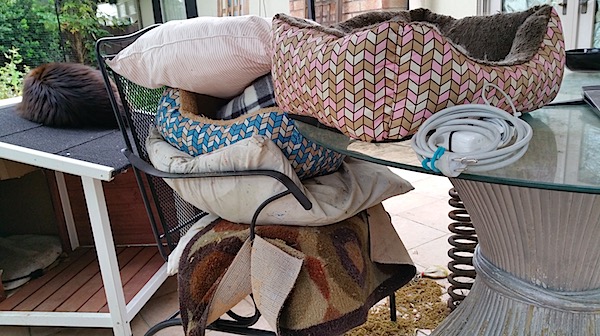 So if I haven’t posted here in the past few days it’s because I’ve been FREAKING OUT about an unexpected problem with a project, where two separate contributors had computer failures and travel disruptions. What seemed like a nice, on-time, if tight project became a total freakout O.M.G.-we-may-miss-the-date over the course of a week and a half.

That slow slide off the cliff was halted today and it looks like we’re back on track, but it was touch and go for a while – I woke up in the middle of the night in a cold sweat and sent a round of emails trying to get things on track, which worked – but I found out a more experienced coworker had been worried about this last month, and had been trying to say so.

Ah well. Hard lessons. I think it will be fine … but I was motivated to take this picture for this blogpost as I sat here and worked on it, and after a bit, I realized why: it’s another example of unexpected complications. What you see is a giant pile of cat bedding, which didn’t work … because why sleep on something warm, fuzzy, and sheltered when hard shingles will do just fine.

And who could have anticipated that, but a cat. Sigh.

Published in Real Life, The Cats and Uncategorized