It’s what happens when we’re not working or playing or thinking or doing. That thing we do that doesn’t fit into all the other categories.

Sometimes we call it living. 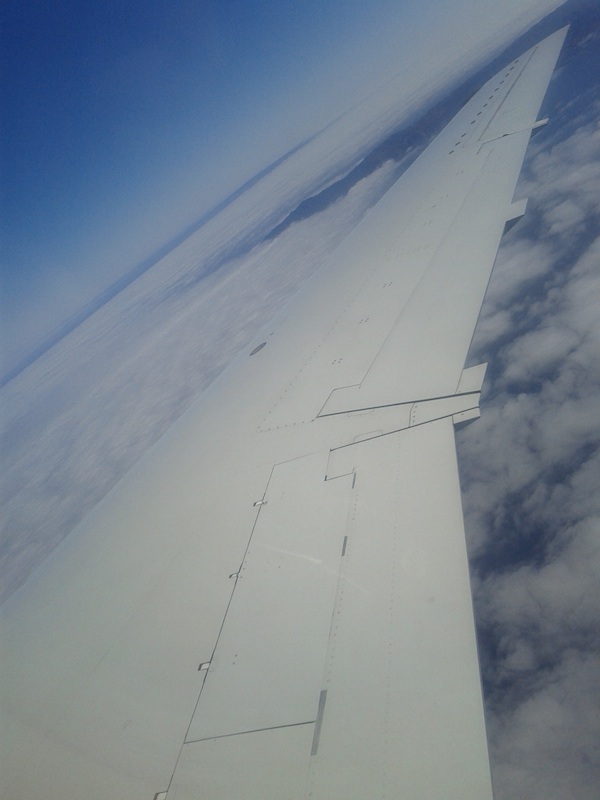 Axually by the time you reads this am already atz the con now - but just befores I waz completely discombobulated from cats:

Anthony Last night our home was invaded by a quiet, timid but quite feral cat. 2 hours trying to locate the capture him - no dice, he was a wily fucker.

Then 3 hours cleaning the pee he left behind when he bolted out the door. Emailed that I wouldn't be coming in and got to bed at 4:25am. Sheesh.

Donna OK...while I am sure that REALLY sucked, I have to admit I also am still laughing. Sorry that happened...Febreeze works well.

Anthony He's an adorable little cat. He's also a master of hiding (he tucked himself into the tiniest possible space in a bottom bookshelf) growls if approached closely and smells of pee. I think he's been causing my other cats to spray. I'd be laughing too if the situation wasn't so serious - just last night I lost two books, half a dozen magazines, some papers, and possibly an heirloom kitchen table I got from my grandmother to pee. The behavioral effects on our other cats are so severe one's on Diazepram, the other's on Prozac, and we're thinking of getting rid of them. I'm locked out of my own library most of the time because we can't let them get in there. I went out for coffee for an hour and a half and found the black cat on top of some clean laundry.

Anthony There's some small amount of funny, I admit it. When not gnashing my teeth, I like to remember that it's better than a kick in the head with a golf shoe!

Cortney Decoite O. My. That's almost as bad, if not equal to, a burglar. My deepest sympathies.

John Have you ever tried a kick in the head with a golf shoe? It's not so bad. My eyes are still crossed and I'm falling down a lot, but I don't think it has anything to do with the kick to the head...

Iz funny in a lolcats trainrecks kind of way. Don't worries, will not get rid of teh cats. But just catching the ups now. Response will be the slow, please be the patients.

Take Care Of Yourself Before It’s Too Late 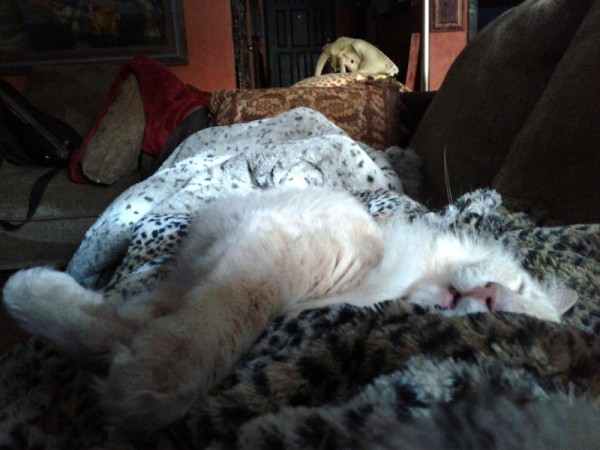 I can't even begin to tell you all that I've gone through recently: sleep deprivation, tonsillitis, tinnitus, internal injuries, a trip to the emergency room (unrelated), and near disasters at work. I've started another blog entry to explain what's been going on, but even that had to be put on hold by other disasters.

The quick point I want to pass on is that I work hard sometimes. I used to describe as working two jobs: by day, my work at the Search Engine That Starts With A G, and by night, the author of the Dakota Frost series. Both could take 40 hours a week or more, meaning normally almsot every nonworking minute ends up on writing.

Recently, this came to a head: I'd finished my scientific paper, had a breather on the writing, yet still knew I was going to have to work hard, nights and weekends, just on my two work projects. So I decided one night I needed to take a break, to chill out, to go to bed early and catch up on sleep. To recharge my batteries.

That night, when I got home, planning to crash out early, one of my cats urinated all over our curtains, then tracked it through our house, necessitating a 3:45AM cleaning job (cats will urinate after each other unless it is completely cleaned up), just before a Monday at work. The next night I was kept up by a sore throat, was worn out Tuesday, and was diagnosed with tonsillitis on Wednesday. The throat pain caused sleep deprivation, the coughing fits caused hemorrhoids (yuk!), the nasal congestion caused tinnitus and hearing loss in one ear, and all of this indirectly caused my trip to the emergency room (more on that later). This went on for days, then for over a week. And all of this just before a huge presentation at work, which we figured out we needed to cancel much too late to cancel - so I had to keep working, even though I could barely keep working. I couldn't really code in my exhaustion, and when I did readings for my other project - and I did work on my other project, because its deadlines wouldn't stop either - the textbooks actually blurred when I sat down to read them.

It was almost two weeks later, a day after the presentation, when I finally crashed, for essentially 36 hours straight. 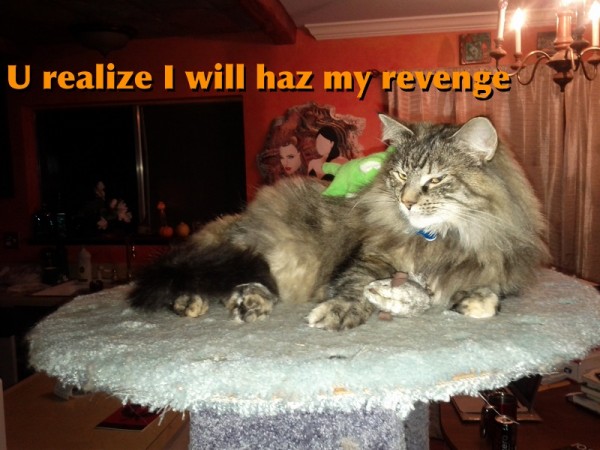 There are lots of ways to interpret this passage, but I'm most interested in the one by Reverend Ken Wratten of Saint Stephens in-the-Field church. Joseph is performing an action in faith - he's moving to a different country based on a voice he heard in a dream - but based on a realistic response to circumstances.

Historians dispute whether the massacre of the innocents really happened, but not that Herod was a tyrant and madman who murdered his own family. So even though we don't normally follow the advice we get in our dreams - and, for the literalists among us, note that in some circumstances the Bible specifically warns us not to - it was nonetheless a reasonable response to the circumstance for Joseph to heed that voice and get the heck out of Dodge.

Father Ken's interpretation of this is that we should respond to the circumstances of our life in faith. Not assume that faith will magically shield us from all woes, but realistically look at the circumstances we have and, based on faith, take the response available to us that best fits God's will. If you are not a Christian or other believer, substitute the idea that you should not rely on your ideology to save you, but you should nonetheless take the best action available to you consistent with your values AND the circumstances. (There's more to Christianity than just Always Do The Right Thing, but I digress.) 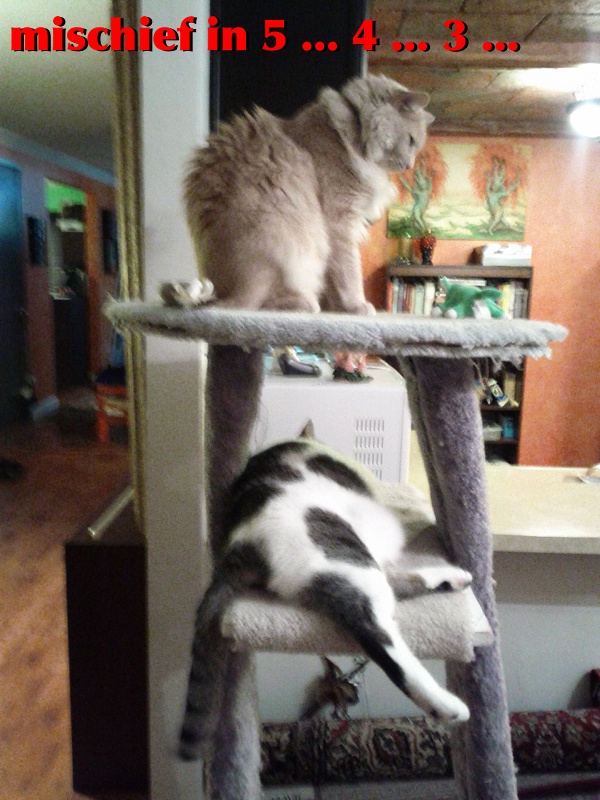 Recently, we noticed a whiff of an odd smell and realized the cats had been spraying under a desk in our library, which I've been reorganizing. I wiped up the spray, picked up the stack of three plastic tubs of computer parts, and turned to take them into the kitchen - and a stream of cat urine slid out from between the boxes and dripped all over a pile of papers I'd set out to file. For those not familiar with cat urine, it's the substance they used to "eat through the floor" in the movie Alien. (No it isn't; that's a joke. See the link below).

The cats had sprayed most of the under-desk shelf but the ridges of atop the plastic tubs had sealed it in and trapped the smell - until I moved it, when the funky urine landed on my pile of junk. Everything was trashed: the box for my MacBook Air, an old drawing book, some papers, a record ... but, miraculously, not my comic book artwork, which, in one of those circumstances which gives succor to those of faith and drives our skeptical friends nuts, was completely spared.

God uses circumstances to prod us to make changes we wouldn't do on our own. I had already decided, in a sort of general way, that I needed to purge my library: this brought the point home, and even helped me decide what to purge. My wife and I already knew we needed to get all three of the cats integrated or get rid of one or more of them: this brought that point home, and led immediately to a new plan of action. And we already knew we were a team, but had yet to really accept that we had complementary work habits, but when she cheerfully worked to 5am cleaning while I slept, and then I cheerfully took over while she slept, that brought that point home.

Religious believers, Christians, look on this as a reminder to look at the circumstances that befall you in faith, and try to find the action God has given you that doesn't just cope with the situation, it actually improves it and brings you closer to him. And for skeptics, remember: fundamentally, we live in a spot of this universe where it is possible for life to thrive for billions of years. It may sound cheesy, but life will find a way: and no matter what the circumstances, you can too. Like pilgrims, you may find it takes a long journey, but at least it's possible to reach the promised land.

Pictured: Lenora irritated by a cat toy, our warring tomcats Caesar and Gabby, and a Youtube experiment attempting to replicate the "acid burning through the floor effect" from Alien.