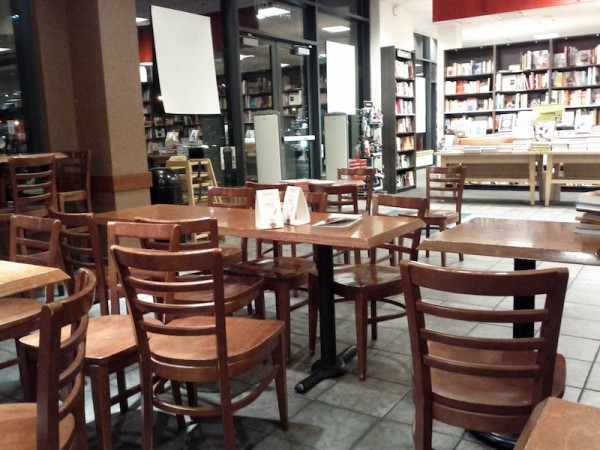 Two of my favorite bookstores are closing … along with many other Borders in the Bay Area:

(ABC News) A list of store closings planned by Borders as it tries to reorganize in Chapter 11 bankruptcy, state by state. Closings are due over the next few weeks. Some clearance sales are expected to start this weekend:

Or put another way, the closest 3 stores to my address are closing; check out these search results:

Which goes back to … fffffffffuuuuuuuuuuu!

Some of you may be thinking “ah, the e-reader and Amazon have killed the bookstore at last.” Uh, no, though that may still happen. The fate of Borders can be laid at the feet of giant discount stores like Walmart, Costco and Target, who can sell books up to five bucks cheaper than a typical bookstore. Contributing to this is the recession, of course, and American corporate culture, which tends to think of businesses as interchangeable moneymaking commodities and not living organisms that need to be helmed by people who understand the business.

Don’t get me wrong – the management of Borders puts together superb bookstores. They’ve been my favorite chain for years. But a fair number of analysts of Borders have suggested that a lot of its recent management hasn’t had the handson bookstore experience to make the right choices. It was owned by K-Mart for a while, for instance. Ugh. And I’m not critiquing K-Mart, but perhaps there wasn’t quite enough skill transfer there. (Full disclosure: I’m a former Borders shareholder).

I’ve seen many other bookstores go: the Science Fiction Mystery Bookshop and the legendary Oxford both of Atlanta. Many other bookstores have survived, and will no doubt continue to survive. But they’re going to have to change, and consolidate – the industry is changing.

I love my e-readers, particularly my Nook Color, and I love the selection and choice of Amazon and to a lesser extent Barnes and Noble online. (Full disclosure: I’m an Amazon shareholder). Some online publishers are particularly attractive, especially O’Reilly, which will typically sell you a DRM-free PDF of your book for an extra ten bucks. And I, personally, as an author sell ten times as many e-books as physical books.

But there’s something wonderful about going into a bookstore, browsing the shelves, and flipping through books. I could blame it on the idea that for the time being, at least, the technology does NOT exist to make flipping through books as fast on the web as it is in real life – to see why, check out the High Performance Web Sites site and look carefully at the latency that goes into rendering a single web page. You’re looking at second-level latency at best. Then go pick up a five hundred page book and flip through it rapidly. You’re looking at second-level latency at best. See the problem?

But if that wasn’t a problem, the physical layout of a bookstore, the related books sections, the browasbility has a real value – as do the omnipresent coffeehouses found in many bookstores. I could see bookstores evolving into showrooms, with much more varied content, single copies of most books, and people wandering through them with their Kindles and Nooks and Kobos and what have you, reading a book and then waving their e-reader at it to add it to their collection. The physical books will often be printed in the stores themselves with cheap on-demand presses.

But even in this blissful world, there will be a need for fewer bookstores-as-showrooms than the bookstores we have now. Places like Recycle Books (a kind of micro-Oxford Used Books in the making out here in the San Jose area) Bookbuyers (a solid competitor to Oxford Used Books), Kepler’s, Books Inc. will survive both as community centers and as online presences – they’re quickly making the move to selling e-books through Google Books. And cultural institutions like City Lights will also survive – it’s also a publisher. But how many of the big box bookstores that I love will survive?

Not certain. And their closing will have side effects: on authors and publishers, on communities, on books and reading in general. It isn’t the end of the world … but it’s the beginning of a tectonic shift.

-the Centaur
Pictured: the Borders at Oakridge Mall … its cafe unusually deserted for a Wednesday night.