The Stack is Growing 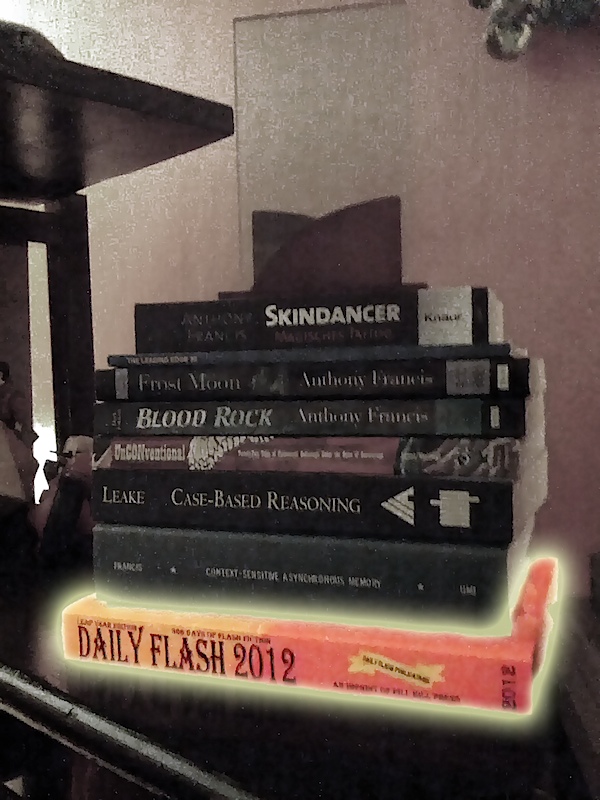 FROM THE WRITER’S ANONYMOUS 12-STEP SUPPORT GROUP MEETING: Hi, I’m Anthony Francis, and I’m an author. (“Hi, Anthony!”) To feed my addiction, I get stuff published.

My first published novel, the urban fantasy FROST MOON featuring magical tattoo artist Dakota Frost, won an EPIC e-book award. It’s out in paperback, Kindle, in German as SKINDANCER, and soon to be audiobook thanks to the wonderful reading skills of Traci Odom. The second book in the series, BLOOD ROCK, came out last year to good reviews, and the third book, LIQUID FIRE, will come out later this year. A spinoff series starring Dakota’s daughter Cinnamon Frost, HEX CODE, will come out next year, also part of a planned trilogy.

One of my short stories, “Steampunk Fairy Chick,” was recently published in the UnCONventional anthology. The story, featuring steampunk adventurer Jeremiah Willstone, is based on a novel called THE CLOCKWORK TIME MACHINE (again part of a planned trilogy) which I’ve got in rough draft form with a possible release late this year or early next year. Another of my short stories, “Sibling Rivalry,” was published in The Leading Edge magazine in 1995, but is now available on my web site. I also write flash fiction. One of my flash shorts, “If Looks Could Kill”, was just published in THE DAILY FLASH 2012 (pictured above) and another, “The Secret of the T-Rex’s Arms”, was just published in Smashed Cat Magazine.

My nonfiction research papers are largely available on my research page, including my nearly 700-page Ph.D thesis (hork). I and my thesis advisor Ashwin Ram have a chapter on “Multi-Plan Adaptation and Retrieval in an Experience-based Agent” in David Leake’s book CASE BASED REASONING: EXPERIENCES, LESSONS AND FUTURE DIRECTIONS, and Ashwin, Manish Mehta and I have a chapter on “Emotional Memory and Adaptive Personalities” in THE HANDBOOK OF RESEARCH ON SYNTHETIC EMOTIONS AND SOCIABLE ROBOTICS.

I have more writing in the works, including a novelette called “Stranded” set in the Dresanian universe from which this blog takes its name, and more writing on the Internet. But what I list above is The Stack At This Time – what you can get in print. Enjoy!