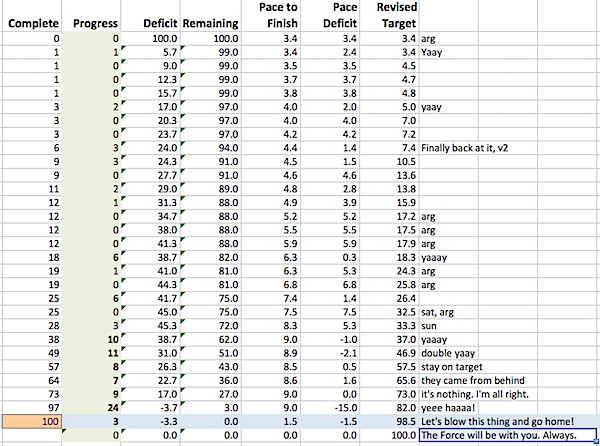 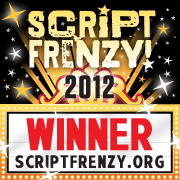 I’m super happy about this, of course, but this has been a very interesting experience. Even though I’ve left out much of the story and many of the nuances, the script is coming in massively long – 100 pages translating to about 150 of a 450 page book, probably resulting in a 300 page script with a four-hour running time.

I’m learning new techniques to cut things out – breaking things into self-contained scenes which could be deleted wholesale, streamlining conversations, recasting thought as action that illustrates the same point. I probably could easily cut this script down from 100 pages to 70 or even 50 … but then I wouldn’t have succeeded at Script Frenzy.

I believe that you can’t really tell what to cut out until you FINISH YOUR WORK (a philosophy shared by many in my writing group). Writing is not editing, and often you can’t tell what a story really needs until you finish it. (If you’re an expert author and have passed this stage in your development, bully for you; above, I’m talking to the not-finishers). For example, can this scene be cut? It might disappear, it might become one offhand line … or it could be expanded to a fullblown argument, if we need to highlight the tension between our heroes:

Jeremiah leans back, her eyes narrowing at her companions.

Let me guess. He lied.

I do love dear Albert, Jeremiah, but the reason I stole your mark was to make a personal appeal.

Einstein was about to rediscover the weapon that ended the Civil War. In the Victoriana, the Peerage suppressed that knowledge.

The point of the mission was not to steal Austrian secrets, but to convince him to keep them secret.

Jeremiah scowls, looking at the both of them.

And you kept this from me.

The mission was … Need to know.

What kind of mad dictator came up with that rule?

And why did he get—

To confirm what he was up to. The Lady Georgiana had to train me to operate the Crookes counter.

Jeremiah is glaring daggers at the two of them…

At my stage in scriptwriting, it’s going to be far easier to tell what to leave out after I’ve put it all in. So, even though I’m going to shift gears back to Dakota Frost #3, LIQUID FIRE and the Science of Airships panel at Clockwork Alchemy, my plan is to finish THE CLOCKWORK TIME MACHINE script in its entirety. Then I’m going to cut it mercilessly until it hits a 2 hour (ish) running time. Then I’m going to hold a reading where a group of friends will read the script aloud so I can see how it sounds (a trick I learned from my friend the playwright Jim Davies). And then I’m going to cut it again.

And then Script Frenzy will probably roll around again, as I’ll have to squeeze all the above in around regular work and writing. But if I keep at it, after a few years of writing scripts I’ll probably have something pretty tight, something that might actually be salable. Not that I won’t try to sell THE CLOCKWORK TIME MACHINE, but I won’t let failure to sell the first script I’ve written in twenty years stop me.

I’m in this for the duration.

UPDATE: I forgot to mention SCRIVENER. Scrivener, Scrivener, Scrivener: without you I wouldn’t have finished THE CLOCKWORK TIME MACHINE on time. I don’t know if you’ll replace Microsoft Word — I’ve been using THAT for almost a quarter century — but you made the process of producing a script effortless. Thank you.