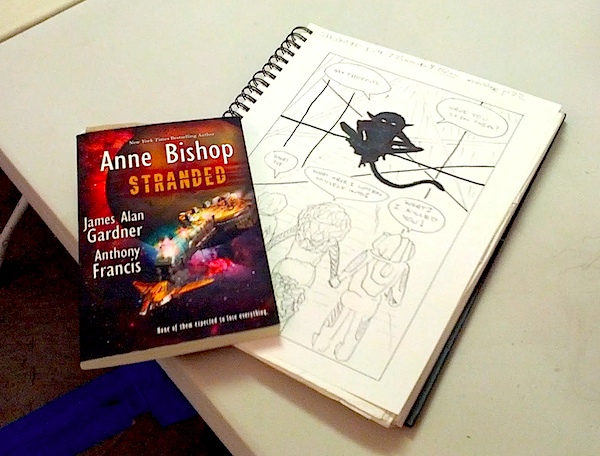 24 Hour Comics Day is a challenge to create 24 pages of a new comic in 24 Hours. The challenge was originally conceived by comics whiz Scott McCloud in 1990, and the challenge was organized into a formal day by Nat Gertler in 2004. Now, eight years later, 24HCD is a global event in which thousands of people participate.

My first two tries at 24 Hour Comics Day were miserable failures in 2009 and 2010. My good friend Nathan Vargas also failed, and we started putting our heads together about how to succeed. For me, pulling a Jim Lee and taking a year off to massively cram at being a great artist might merit an angry note from my mortgage service provider, so we needed other options.

As it turns out, the techniques in the Kit did work in 2011, not just for Nathan and me but also for a wide variety of other people as well. Nathan has worked hard to promote the ideas and concepts in the Kit while I’ve been a slack ass lazy bum writing novels, so since he works hard now Comics PRO distributes our materials as Participant Resources. But was our success a fluke?

Well, to test the theory, we tried it again. A few months before we reviewed our exercises and updated the Survival Kit, though website problems prevented us from updating the materials everywhere in time for the 24HCD event. We re-ran the tutorial we’d done before, and practiced a month or so in advance, cracking the knuckles so to speak, to get ready …

Because yesterday was 24 Hour Comics Day. 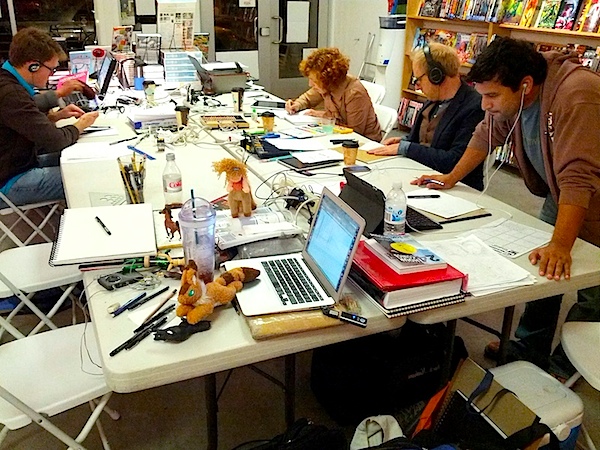 We both succeeded, of course; me around 8:20am and Nathan an hour and a half so later. It was great to participate at the always wonderful Mission Comics, but unlike previous years where we were too zonked to think at all, this year we had an interesting and lively conversation about what we did, why we did it, why we’re doing this, and how to make it better in the future.

And unlike last year, we’re planning to meet next week, rather than a few months in advance. Hopefully there will be some great stuff to show you – such as our comics, which we finally may have a strategy to get online without fixing the server error that’s been a pain in the patootie to fix. Next up: a 24 Hour Comics Day Timeline, like last year’s. Stay tuned.

Now, home to bed, because at this point I’ve been up 32 and a half hours straight!

Pictured: the last page of my 2012 24 Hour Comic, “Stranded Part 2”, my adaptation of my own story “Stranded,” published in the book STRANDED. Got that? Also pictured is a bunch of writers at Mission Comics and Art. Thanks Leef!