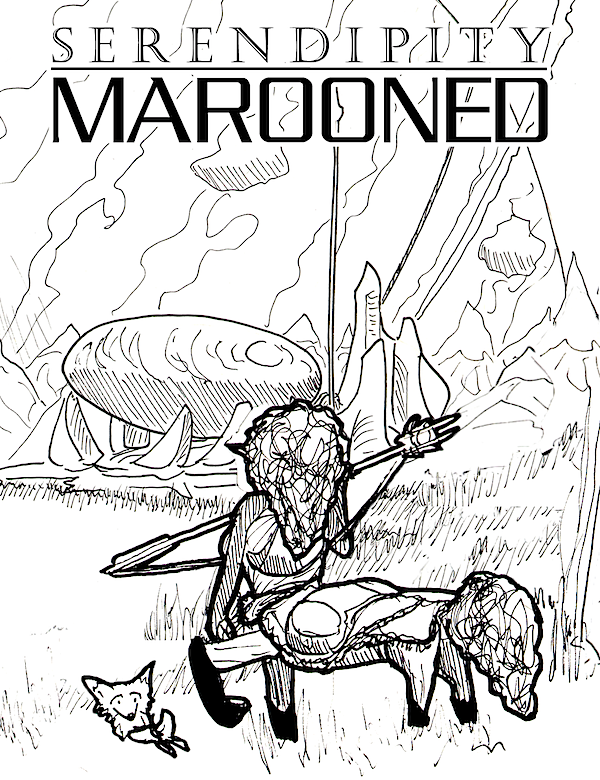 Well, it’s that time again: National Novel Writing Month! This year, I’m working on MAROONED, the continuation of my short story “Stranded” from the anthology of the same name. A brief excerpt from Part 2, “Conflicted”:

Serendipity stirred. She was cramped and folded. Her hooves caught on rough ballistic tarp. Her back hurt, her rump hurt … then she heard sparks and smelled smoke. She unfolded with a start—and klonked her head on a support beam, tumbling off the cot onto the grille.

Disoriented, she stared up at a dim line of light. The tilted walkway she lay in was barely wide enough for her; the cot she’d fallen off of had definitely not been long enough for a centaur. Beside her was a half-locker with her satchel; above, the wall of a bunk jutted in.

This was insane. They had the entire run of Independence’s cargo bay. She’d sleep on the floor if she had to. She winced at a spark of pain at the join of her backs—then heard real sparks and smelled fresh smoke, and sprawled and stumbled, trying to get up before she died.

Her hand hit the hatch in panic and found it firm, and she beat at it with her palm in the dark, fumbling for the latch as she brought her nightvision and filaments online. There was another spark, and Serendipity pounded the door again. “Dashpat!”

“Sorry!” cried a voice beyond the door—one Serendipity recognized as Andromeda, Independence’s chief engineer. “Leonid’s prepping breakfast, I came to wake you, but you were snoring, and the lights, they’re out, so I … I started to work with this panel, but then I—”

Andromeda sounded completely rattled. From the other spacers, Serendipity gathered that Andromeda had been de facto master of the ship … until a couple of days ago, when the boy Sirius pulled the fuse on the life support system and forced an emergency crash landing.

The voice on the other side of the door didn’t sound like someone who’d been a captain for three years. She sounded like a little girl, a scared little girl who’d been caught with her hand in the cookie jar … or maybe a refugee who’d had her whole world pulled out from under her.

A hundred white computer filaments slid out of the shock of hair on Serendipity’s right forearm, probing the air, lighting the doorframe with a fiber optic glow, revealing the handle. Microscopic cameras fed images to her eyes: T7 LOCK HDL / FLM INDEPENDENCE.

Almost instantaneously, recognition rattled through weave of computers built into her: a Type 7 Lock Handle, from the Faster-than-Light Module Independence. Yes, that was right: the NCE class “ships” were originally modules, built to fly the arkships away from “dying” Earth—

Serendipity seized the handle, hiding the image beneath her hand. She drew a breath. As cramped as this space was, it was just a bunk. As long as she didn’t open the door, she could imagine she was at summer space camp, and not on a seven hundred fifty year old starship.

Not stranded halfway across the galaxy, utterly cut off from her people.

People who read this blog may have noticed an extended hiatus. There’s been a good reason for that: I had too many writing projects stacked up, and couldn’t tackle them all at once. I had to start putting things on hold.

So I had to buckle down, focusing first on editing DOORWAYS TO EXTRA TIME (now out to the world) and finishing a draft of LIQUID FIRE (now out to betas). One of the first things to go was this blog. Another was social media: the Serendipity pages on Facebook and Google+ got short shrift; only what I had to for 24 Hour Comics Day and Dakota Frost got any attention.

I’m working to change that, but I’m going to continue to follow the same procedure. National Novel Writing Month comes first, and the first book I’m working on for Nano, MAROONED, comes first. Then life. Then blogging and social media, just enough to keep it going. After that, I’ll be writing notes for a story called QUARRY, just so I don’t lose them – it’s a brand new idea.

The consequence is, there won’t be that much blogging this month, unless Nano and life are both taken care of. But hopefully more than there has been over the past few months while DOORWAYS and LIQUID FIRE were the primary focus of my attention. Now that those are out of the way, I feel like I can breathe easier.

At least, as long as Serendipity and Leonid can keep the oxygen farm running…

P.S. Yes, I did make sure I did my daily quota before blogging this: 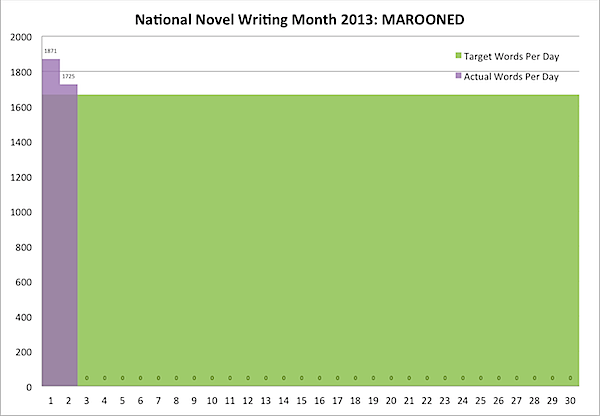